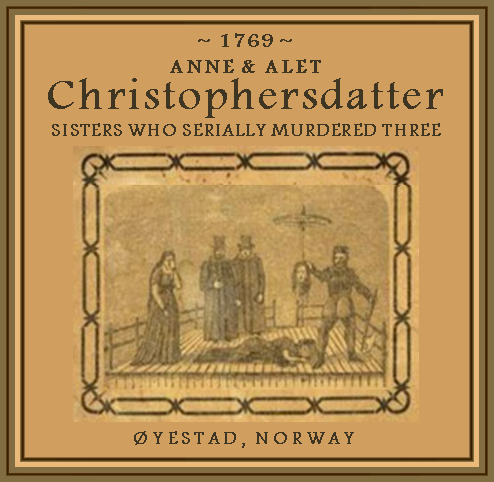 A total of four murders were suspected. The pair were convicted of three.

(Translated): The story is true, and the historical primary sources can testify to that. The case shook the locals in Øyestad so much that there are still stories about it, and the author Gabriel Scott used it as a starting point for his novel Jernbyrden [1915].

Alet confessed during interrogation that she murdered the women with a poison provided by her cousin, Berthe Olsdatter. The motive for killing Karen Jonsdatter is said to have been jealousy. Alet wanted to marry Karen's husband, Alf Aanonsen. The year before, in 1768, Alet poisoned the widow Gunild Carlsdatter, with whom she then served. She could not give any real reason for the murder. Maybe she wanted to try how the poison worked? The poison was given by smearing it on a piece of bread, presumably under a thick layer of butter.

Alet Christophersdatter and Berthe Olsdatter were brought before the court in Nedenes District Court on 25 September 1769. However, new information emerged in the district court which led to the trial being postponed. In October, Alet's younger sister, Annee Christophersdatter, was arrested, also suspected of poisoning. Alet claimed that she had got the idea for the fly powder from Berthe, which Annee had confided in a few years earlier.

During interrogation, Annee admitted to having poisoned her foster mother Guri Hansdatter in 1762, when she was 16 years old. She was then in the service of the deceased, but must have been very unhappy with her. An old woman she stumbled upon by chance, advised her to kill Guri Hansdatter using fly powder. When Annee said that this would be a great sin, the old wife claimed that God would forgive her because of her young age, and gave her some fly powder she had bought for her own purposes. Annee kept the gift, and the temptation must have been too great to resist.

When the case in Nedenes District Court continued on 22 November, Annee Christophersdatter therefore also sat on the bench.

The verdict was handed down in Nedenes District Court on December 2, 1769.

MOVIE Based on the case

Alet was born in 1739, presumably in September, and Annee in 1746, probably in March; paa Helle. That in the months mentioned they have seen the light can be concluded by their baptismal days, the 20th of September and the 8th of April.. . .

Annee was to be executed first. A black scarf was tied around her eyes and she was led to the block. The executioner was instructed by the bailiff to hurry to put an end to the suffering of his victims.

However, Annee once again raised her powerful singing voice and faced death with psalm singing on her lips, as, according to the oral legend , she sang the psalm:

"Strengthen yourself, O God, my fearful spirit,
when powerless blesses foot and hand,
and hear me in my last moment,
when I only stutter, only sigh."

When she was about to lie down to receive the death blow, she gathered her magnificent hair hanging over her shoulders and slapped it down over her face.

After the right hand had been cut off, the Master finally made the blow that was to bring the unfortunate death. However, it was not stabbed to death. The ax did not hit her properly, and the girl was seen lifting her body and making some weak movements with the hand she still had left.
The second Hug also failed. Only at the third Hug did the Head fall, cut off rather than cut off.
The butcher had blood stains on his face.

Alet lay unconscious on the scaffold.

A few exclamations of indignation resounded among the sobs that were heard from all sides. Some unworthy persons went about selling liquor to the spectators.

When Alet had come to herself, she lay on the block, which had been flooded with her sister's blood, and after her hand had been cut off, her head fell by a single blow. The sentence was served.

Dog nei. Even after death, according to the judgment, the bodies of the two criminals were to be laid on steep slopes and the severed hands and heads put on poles!

This was now done, and it is said that these sad trophies of justice were thus on display for eight days. The girls' mortal remains were then buried at the courthouse, as they were not considered worthy to rest in consecrated ground.

These horrible abominations certainly need no comment. They are indicative of the position of civilization in the last century.

Some of the readers might want some information about the appearance of the two sisters, and therefore it is added that their exterior was by no means a picture of their interior.

Annee was very beautiful. Her rich locks were brown with a yellowish tinge; Her eyes were blue, her features regular. The expression on her face was gentle and pleasant. She had a beautiful figure and was of medium height or maybe a little above medium height.

Alet was also of medium size, fine and limp. Her rather pale face was, though beautiful, not endearing. She did not really have what is called "a good face". She, too, had blue eyes and splendid hair of the same color as her sister's. Incidentally, all intelligence agrees that Annee was the most beautiful of the two girls.

Their assistant Berthe was short of stature, submissive, and had an unfavorable appearance. After spending some years at the penitentiary in Kristiania, she came again, not knowing how, on a free footing, returned to Helle and married there. She died at the same age. 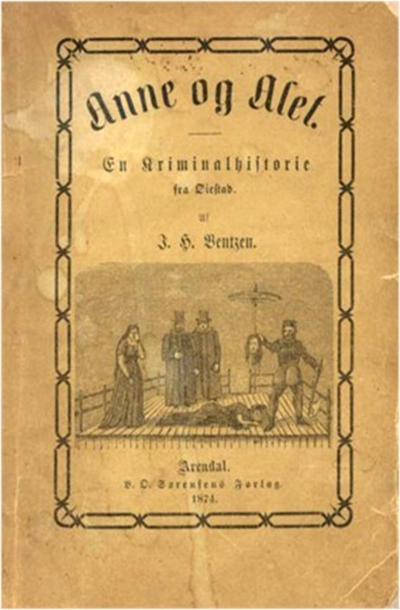 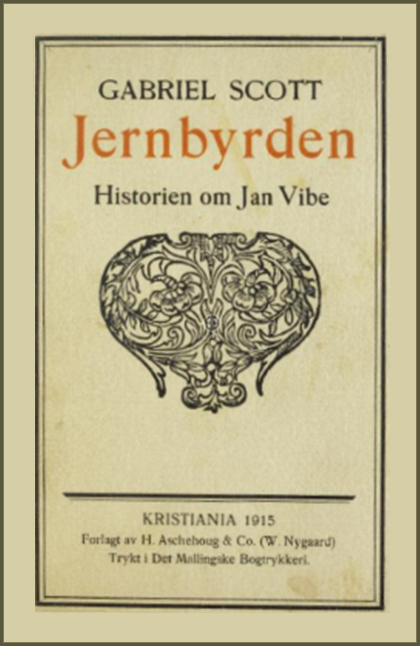 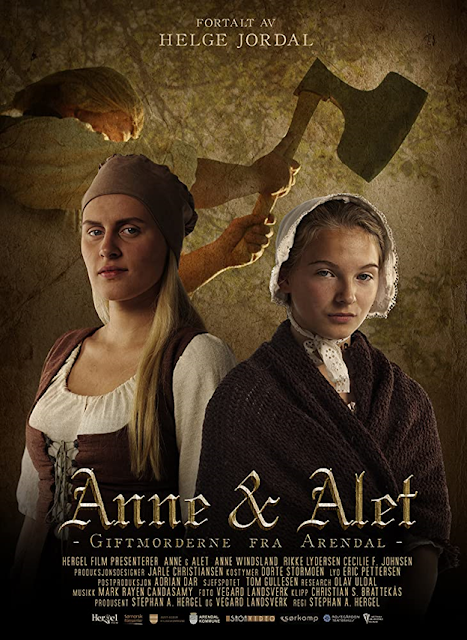