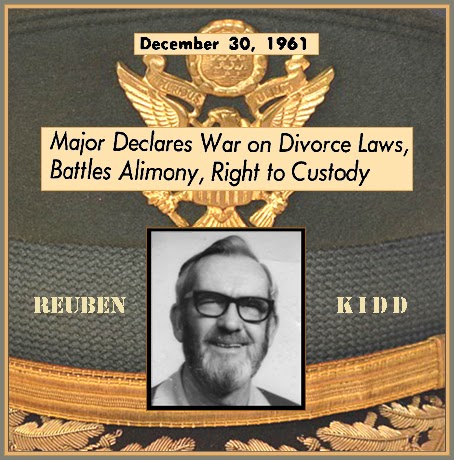 FULL TEXT (Article 1 of 5): New York – The “Divorce Racket Busters” are after me – and I’m not even divorced.

They’re after every man that’s got a wife and want to warn him of the doom they claim is awaiting him.

They’re trying to free husbands from alimony slavery. Especially in California. Where, they claim, it’s scandalous.

They’ve got headquarters on Citrus Heights, Calif., and Reuben P. Kidd writes that “We need to impress upon all ‘happily married men’ that their freedom is in jeopardy and is entirely dependent upon the whims of their wives.”

They’re circulating a cartoon titled “The Alimony Joy Ride” which shows the ex-wife, her lawyer and the judge celebrating her divorce, with the poor husband pushing the car in which all three having their joy ride.

“Don’t be a pushover,” says the cartoon. They then want to change the California laws.

FULL TEXT (Article 2 of 5): Sacramento, Calif.— Former Army Maj. Reuben Kidd who survived four years of military combat and came home to face a divorce action, has opened a nationwide attack on alimony, community property and women's right to custody of the children.

He says he is encouraged by “at least 1,000'” sympathizers in California and “hundreds” elsewhere in the nation, and adds be has begun the initial mailing of membership applications for his new organization.

It is called United States Divorce Reform, Inc. (USDR), and was chartered Nov. 20, 1961, by the California secretary of state.

Kidd contends that divorce laws in many states encourage marital breakups by making them easy, if not downright profitable for women. He is not opposed to divorce, but he favors enforcing “responsibility” on the female partner.

USDR was conceived early last year in a Sacramento attorney's office. There, Kidd learned that his wife's divorce action would enrich her by $22,500, or half his total wealth.

He started modestly with letters to the editors of local newspapers, and said he gradually found supporters in California, Nevada. Michigan, Wisconsin,  New York, New Jersey, Massachusetts and the Panama Canal Zone.

Kidd said most supporters are men like himself who believe themselves victimized, by a divorce settlement, but he said “many, many” women had written to him.

—Community property laws that give each partner the property that he or she brought to the marriage. 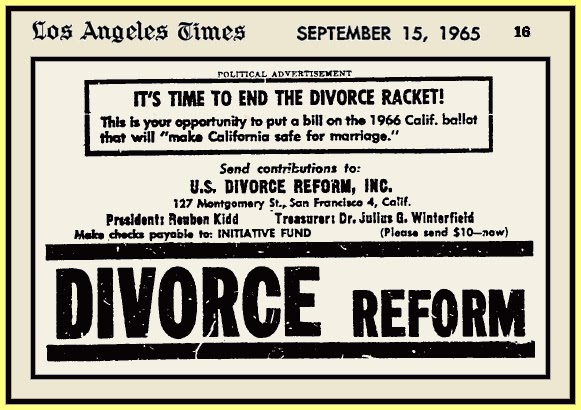 EXCERPT (Article 3 of 5): Alimony payers are collectors of injustice stories. They seem to derive some black enjoyment from tales of legal maltreatment. Reuben Kidd, for instance, a big dark-haired man with a vague resemblance to Robert Ryan, begins his bitter narrative by mentioning he was awarded a medal for combat heroism for World War II. “I fought for freedom,” he says. “Freedom for almost all Americans, including my wife – but not including me.”

Kidd consulted a lawyer when his childless marriage began to break up. Listen, said the lawyer, “whatever you do, don’t bring the money question to court. California courts will murder you. Negotiate a private settlement with your wife beforehand. Whatever she asks for, take my word, it’ll be less than a court would award her.”

Kidd’s wife asked for, and got, a substantial share of Kidd’s property. What seems to have stabbed Kidd most deeply is the fact that his settlement included some Army pay he had saved during the war, before marriage. “One of the things we were fighting for in that war,” he notes gloomily, “was the right to own property – freedom from legal confiscation.” Reuben Kidd came out of this experience howling mad and promptly organized U.S.D.R.


Here is a report from 1964 on one of the regional offices, in West Virginia.

FULL TEXT (Article 4 of 5): (Charleston, W. Va.) – Mrs. Henry Christy of Camden Drive is fighting for men’s rights “against women who are making a racket out of divorce and lawyers who are getting benefit out of this racket.”

An assistant director of the East Coast Woman’s Division for U. S. Divorce Reform, Inc. Mrs. Christy spends a good deal of time studying the problem of divorced people and writing and speaking on their behalf.

“There is no equal justice for a man at all the way today’s laws are written. Just because the law says the man is in the wrong or the wife says so doesn’t make it so. There are always two sides to every story and one can be  as bad as the other,” Mrs. Christy said.

Of  course, there are times when men aren’t any good at all but laws are ridiculous when they allow a woman to take everything.

“Why should a man pay a penalty for the rest of his life because he has made one mistake? Why should an innocent second family starve because of a grasping ex-wife?

“Why should a man support children he is not allowed to see? Visitation rights aren’t upheld, especially in Kanawah County. A father can’t be a father to a child if he doesn’t see it.” Mrs. Christy continued with fire in his eyes.

Just because a mother is a mother and a woman doesn’t mean she is a good parent and it’s not necessarily right for her to have the children. A father can pay a babysitter just as well as a mother can.

“I don’t say men are always right, but I do say decisions should be made on facts in the case and not because she is a woman and he is a man.

Mrs. Christy believes, along with the organization which she represents that “The biggest need in divorce reforms is a family center to which a couple may go when they are faced with the possibility of divorce. The center should have specialists in human relations, psychologists, social workers and clergymen of the couple’s faith. The board would take time to investigate and see if the marriage is workable. Ample time should be taken for consideration. Many demanding divorces are angry and upset and say, ‘I’ll just get a divorce! Rather than say ‘Let’s try to work things out.’”

Mrs. Christy is the daughter of the late H. B. Sheets, a city fireman for 23 years. She likes mixing with people and reading books about children and child psychology.

Her husband works for DuPont’s Belle plant and loves to fly planes. She met him when he asked her son, Roy, if he would like  to take a plane ride. Roy and their own son, Scottie, share Dad’s enthusiasm about flight. Mother’s an earthling.

When Mrs. Christy ran for the legislature, Mrs. Christy campaigned right along with him. “We lost this time but we’ll try again,” she said.

Mrs. Christy has been active in the fight for divorce reform for about three years and a director since the women’s division was organized in January, 1964.

She answers mail from people with problems from at least 13 states, Pakistan and Canada.

“Not all people who have joined the fight have divorce problems,” she said. “Many who work with us are happily married and interested in preserving the American home.”

FULL TEXT (Article 5 of 5): San Francisco – Divorce American style, described by its opponents as “trial by combat” and “lawyers’ blackmail,” would go out the window under a proposed amendment to the California State Constitution.

Court actions with their personal battles, high law fees and headline publicity would be replaced by decisions of a state department of family relations run by six elected directors.

Backers of the proposal announced Thursday a drive to get the required 468,259 signatures by April 12 to qualify for a June 7 ballot.

The amendment is sponsored by United States Divorce Reform, inc., an organization with chapters in 43 states, Australia, Germany and West Pakistan. Many of its leaders are losers in state divorce courts.

G. J. Winterfield, 50, California director of the reform group, told a news conference that California was chosen as the pilot state because “it leads the civilized world in divorce.”

“We have got to stop this slaughter of our homes if we are to survive as a nation,” said Winterfield, a doctor of chiropractic medicine and divorced father of four children.”

“We are destroying homes to get rid of relatively minor problems.”

Under the proposed amendment the Department of Family Relations would have exclusive jurisdiction, subject to appellate court review, over divorce, annulment and separate maintenance proceedings. 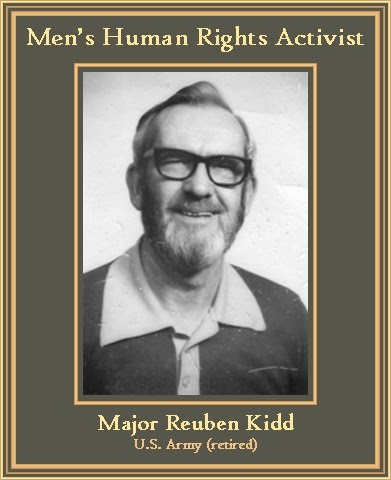