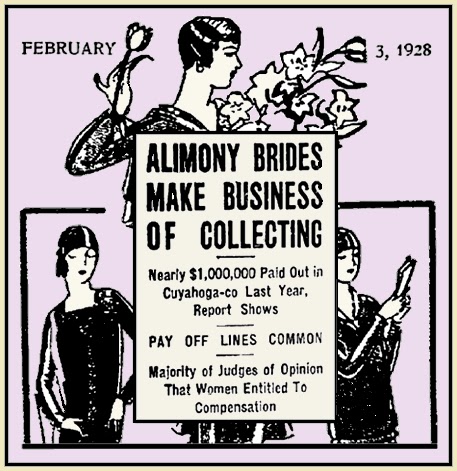 FULL TEXT: Cleveland, Feb. 3 — Marrying for alimony as a profession, has reached enormous proportions in the United States, if nearly $1,000,000 paid divorcees last year, in Cuyahoga-co, in which Cleveland is located, is any indication, Arthur J. Eyring, alimony clerk, recently remarked.

The women who make a business of collecting alimony here have increased 340 percent in the past 10 years, Eyring revealed. In 1917 only 81 women drew checks from their former spouses. Today the number is so great that the divorced women are often obliged to stand in line.

Eyring who has paid out alimony for many years declared that although many women are deserving in being supported by their former husbands, it is unbelievable the number of women who are receiving checks from two or maybe three misguided former husbands

Where there are children, Eyring believes it is no more than light for the former married man should aid in supporting his former wife and “kiddies.” It is contended, however, that the familiar “gold-diggers” far outnumber all other alimony receivers.

Most judges, Eyring declared regard marriage as a life contract and thick that if the contract is broken thru the fault of the husband or not, the wife is fully justified in taking alimony as a fair return for her investment.

However, it is said, that more modern justices feel it a great injustice for a right-minded woman to accept support from a man she has ceased to love and live with.