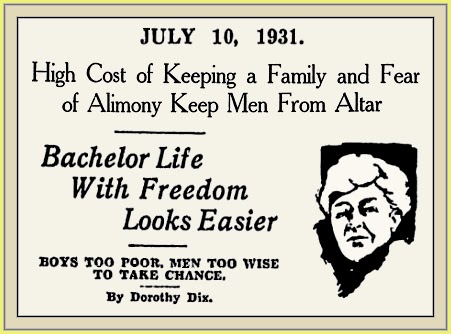 FULL TEXT: According to the census report, there has been a very decided slump in marriage, and this is blamed on men by  those who have investigated the subject. They say that women are as eager as ever to enter the holy estate, but that men fight shy of it. Doubtless that this is true. Probably women have always been more anxious to marry than men because they have always looked upon matrimony as a career and getting a husband their chief business in life. The favorite game of every girl-child is playing bride, and by the time she gets in her teens she has her wedding all planned out, even to the last detail about the flower girls and the ring-bearers.

~ Boys Think Of Other Things. ~

But no little boy looks forward as joyously to being a bridegroom as he does to being a quarter-back on a football team. Marriage is never the climax of his ambitions as it is of » girl's. He knows that, like death, marriage will get him sooner or later, but, at least until he falls in love, he cherishes a vague, secret hope that somehow he may escape it.

That men are becoming more bridal-shy and harder to catch every year women will all testify from their personal experience. More and more de women have to do the chasing of husbands if they want one. More arid more alluring baits do they have to use to toll men into the matrimonial fold, and this despite the fact that never were women more desirable, never better-looking, never better fitted to be real helpmates.

The reluctance of the modern man to marry can be explained in many ways. First, perhaps, by the high cost of living. Marriage appeals more to the young and reckless, who have not learned how to figure out the cost of things, than it does to the mature and cautious, who look at the price tag first and then at the article. But boys cannot marry because it costs too much to support a family, and by the time a man can afford a wedding-ring only too often he has lost his taste for it.

Then men don't marry because they are too selfish. They love themselves better than they do any woman and they consider that swapping off their freedom and latchkeys for the privilege of listening to curtain lectures when they come home at 3 A. M. is a poor trade. They prefer sports cars to perambulators and playing golf to doing chores around the house on Saturday half-holidays, and so they stick to single blessedness instead of taking a chance on double wretchedness.

Still another reason why men do not marry is because of their fear of alimony. Certainly the gold-digging ladles, who make a man pay and pay and pay as long as he lives for the mistake he made in marrying one of them, are doing a lot to kill the goose that lays the golden egg. For they have made marriage a hazardous adventure that causes men to get cold feet even to think about and that causes the prudent to avoid the altar.

For under the present laws it makes no difference whether the man was the one to blame or not; If a marriage goes blooey he has to settle the bill for the wreck. The man may have done his part nobly. The woman may have reneged entirely on her part. She may have been a shrew, a lazy loafer woman impossible to live with, but the poor, unfortunate who has married her as to support her, anyway, and often to contribute to the support a second husband. When you think of the alimony laws the marvel is not that so many men are afraid to marry, but that any man is plunger enough to risk it.

However, prudence does not always keep men from marriage. The lack of an incentive is likewise a deterrent and two of the principal motives which formerly caused men to marry are now lacking. One of these was the man's need of someone to take care of him and provide for his physical comfort. Men used to marry for a home and somebody to sew on their buttons and send out their laundry. There came a lime in the life of a young man when he was sick of boarding-house prunes and hash, and when in dressing in a hurry he couldn't find a clean collar or a pair of socks without holes in them, a home and a wife suddenly seemed the most desirable things on earth and he rushed out and proposed lo the first girl he met.

But now the land is strewn with clubs and bachelor apartments where single men are valeted and cosseted better than any wife could do it, an that makes marrying for a home a superfluity. Also, alas, women have throw away, when they went into business, the rabbit's-foot with which they conjured men into matrimony. For they are no more domestic, and many man refrains from popping the question to the girl he works at the next desk to because he is well aware that she is a better sales manager than she is a cook and that she would make a more satisfactory business partner than she would a life partner.

But perhaps the chief reason that men don't marry is because they don't have to in order to get feminine companionship. In the olden days a man led a girl to the altar because that was the only way in which he could enjoy her society without mother and father listening in. Then love-making had to lead somewhere and he paid for his petting parties with a marriage certificate.

Now that is all gratis. The society of women is as free to him is that of men. He spends his days in offices with girls. He plays golf with them. He goes off with them on long automobile rides, with never a chaperon in sight. Girls smile upon him. They break their necks trying to please him and keep him amused and entertained, and he doesn't have to pay their bills or put up with their tempers or abridge his own freedom. He has a cinch. And he knows it. And he means to keep it, and so he doesn't marry. 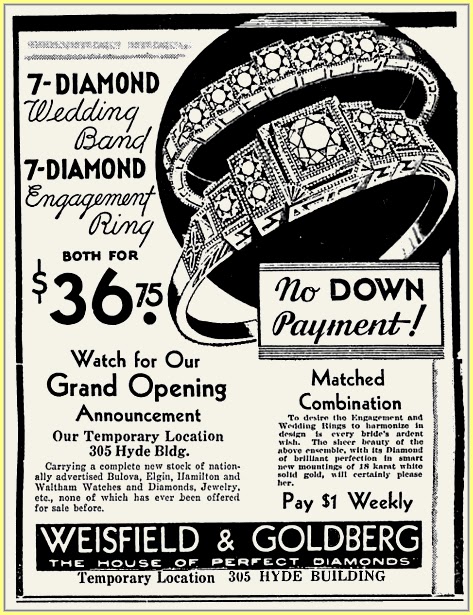 This advertisement appeared on page 3 of the same paper the Dix article was taken from (on page 5).

Email ThisBlogThis!Share to TwitterShare to FacebookShare to Pinterest
Labels: MGTOW