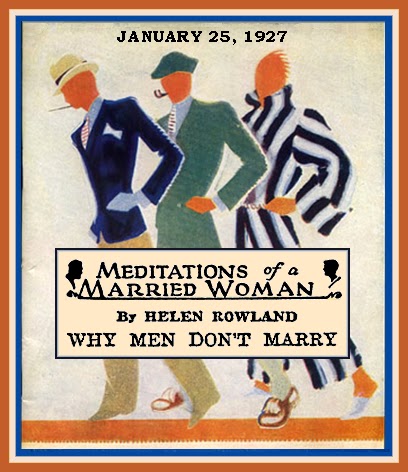 FULL TEXT: All that the modern girl asks of man is that he treat her with tenderness and chivalry – and the same time permit her to drive the car, run the house, swim the Channel and beat him at golf and tennis.

That he acknowledge her as his economic equal – and then marry her and pay all her bills for the rest of his life.

That he look up to her as his guiding star and his “beautiful influence” and at the same time admire her backless evening gowns, her above-the-knee frocks and her ability to mix a wicked cocktail.

That he be anxious and eager to enter the till-death-do-us-part pact – and yet perfectly willing to pay her alimony and send her to Paris at her own expense, when domestic life begins to bore her.

That he work like a stoker in the office all day, to supply her with fur coats, limousines and square-cut diamonds – and yet have plenty of time and pep left to go around to theaters, card parties and dancing clubs with her.

That he look on calmly and serenely while she rouges her lips, darkens her lashes and powders her nose – and still think of her as Nature’s Masterpiece, God’s Perfect Work.

That he think of her as a creature of finer clay and more delicate sensibilities than himself – and still admit her to all his clubs, give her his turn in the barber’s chair and let her ride beside him in the smoking car.

That he give her equal say in making the laws and running the country – and yet, not expect her to obey the traffic regulations or punish her for a little thing like shooting up her husband.

That he admit her on equal footing in the professions and the ranks of business – and yet never fail to fall for her sex-appeal, or to give her a job on the strength of the twinkle of her eyes or the dimple in her knees.

That he permit her to go around almost as barely clothed as a savage and as gaudily decked out as a Hottentot – and at the same time reverently keep on his coat and take off his hat in her presence, as though she were a civilized woman.

That he allow her to make his social rules, choose his friends and censor his clothes – and at the same time think of her as a cute, lovable, little thing to be “taken care of” – God’s greatest Gift to Man!

That’s positively ALL! And yet, men are becoming so woman-shy, that it is getting harder to lure a man into marriage than it is to get a golfer into church!

Email ThisBlogThis!Share to TwitterShare to FacebookShare to Pinterest
Labels: MGTOW