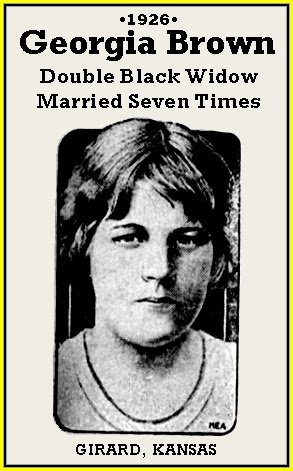 FULL TEXT (Article 1 of 4): Fred R. Morton, formerly of this city [Ft. Scott, Kansas], and son of the late F. Q. Morton, a former Fort Scott man, was shot and instantly killed by his wife in the yard of their premises at Pittsburg yesterday afternoon about 5:30 o’clock. The woman shot herself in the head immediately afterward, and will probably die. She was taken to Mt. Carmel hospital. Morton was shot in the heart, and died instantly.

The shooting was the culmination of a quarrel in which the Mortons had engaged for perhaps an hour before the tragedy, according to reports. The cause of the quarrel; is not definitely known. one report is that recently Mrs. Morton went to the poor farm to visit a relative, and that yesterday’s fatal quarrel was the result of his reproaching her severely for the visit. Another report is to the effect that it was a triangle case.

That the quarrel, even before it reached the point of the tragedy, was a violent one is evidenced by the fact that the neighbors called the police. Before they could reach the Morton address, at 512 North Joplin street, the shooting had occurred.

Mrs. Morton is 40 years of age, and Mr. Morton, it is said, was several years her junior. Mrs. Morton has two grown daughters, one of them married.

Morton was a Frisco brakeman, and formerly worked in that capacity here for the Frisco. He had been in Pittsburg only about a year., it is said, although his wife had lived there practically all her life. It is reported that Morton was her third husband.

FULL TEXT (Article 2 of 4): Girard, Kas., June 19. – The varied matrimonial career of a Girard woman, Mrs. Georgia Brown, had added to it another chapter today with the shooting of Mrs. Brown’s sixth husband, James Gilbert Brown, an employe with a coal drilling company.

Brown was found by officers shot to death at his home shortly after midnight, following a call from neighbors who had heard a shot. Mrs. Brown reported at that time she was awakened by the shot and found her husband dying.

The shooting followed the return of Mrs. Brown last night from Texas, Charles Reid, a farmer living near Girard, who had been staying with Brown during the woman’s absence, testified before the coroner’s jury that Mrs. Brown and her husband had quarreled within a short time after her arrival last night.

Brown is the third of Mrs. Brown’s to meet a violent death. Fred Morton, her fourth husband, was fatally shot in Pittsburgh five years ago [Aug. 21, 1921]. Mrs. Brown, then Mrs. Morton, was tried for first degree murder at that time and was acquitted.

Her first husband, Will Altember, was shot to death by a brother-in-law at Ashton, Ark.

Altogether, Mrs. Brown has been married seven times, having divorced O. G. Leonard in June 1919, and remarried him later the same year. he was divorced a second time. Leonard was the third husband. The second and fifth were Frank Ferguson and George Francis, both of whom she had married in the district and later divorced.

FULL TEXT:(Article 3 of 4): Pittsburgh, Kans., Nov. 19. – Mrs. Georgia Brown, seven times married, was found guilty of second degree murder by a jury which returned its verdict at Girard shortly after midnight last night. She was tred on a charge of slaying her husband while he lay asleep at their home in Girard.

The jury was out nearly seven hours and reached an agreement on conviction with the fourth ballot. Later polls were taken to determine the extent of the crime. She will be sentenced November 27.

One of the state’s points was that the gun with which it charged Mrs. Brown killed her sleeping husband was the same weapon which blazed death five years ago for her fourth husband, while the couple were living in Pittsburgh. She was tried on a murder charge at that time and acquitted on a plea of self defense.

The state also brought out that a third husband met a violent death several years ago in Arkansas. Mrs. Brown’s matrimonial career has included six husbands, one of whom she married twice. Marriage and divorce records show that on one occasion she was wedded a month before one of her four divorces was granted.

FULL  TEXT (Article 4 of 4): Girard, Kas., Nov. 27 – Mrs. Georgia Brown, 45, must spend from 10 years to life at the state industrial farm for women for the slaying of her sixth husband, James Gilbert Brown here on June 19. sentence was passed today.

Mrs. Brown was alleged to have shot her husband in his sleep with the same revolver that husband No. 4, John Morton, was killed with five years ago. She was tried and acquitted of Morton’s murder.

She was married seven times in all, twice to No. 3, named Leonard. Three of her husbands met tragic ends, No. 1, named Altember, having been killed by her brother.