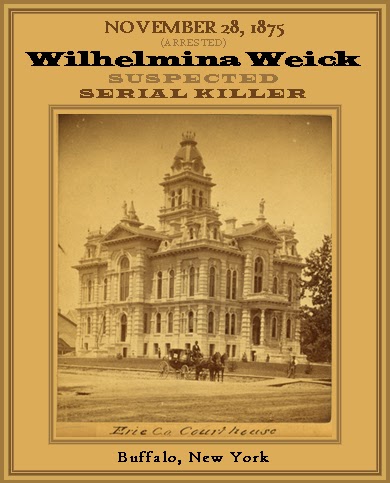 Wilhelmina Weick was suspected of five murders. She was convicted for the final one in the alleged series. Following is Mrs. Wieck’s motion for a change of venue which cites these suspicions.

EXCERPT: Buffalo, N. Y., Dec. 28. – In the case of Wilhelmina Weick, charged with the murder of her stepson, Michael Weick, who was found in a well with a kettle with a kettle and chain attached to his neck, on the 28th of November last, the Coroner’s jury to-day reached a verdict that the boy came to his death by poison at the hands on his stepmother. The Mrs. Weick was tried suspicious that she poisoned two husbands and two or more children. The last husband’s body has been exhumed and the stomach is now in the hands of a chemist.


MOTION FOR A CHANGE OF VENUE,

and proceeded to read the following affidavits in support of the same;
STATE of NEW YORK,
County of Erie, City of Buffalo

Wilhelmina Weick, being duly sworn, disposes and says: That she resides in the city of Buffalo, and has resided here for more than eight years last past. That she is now under indictment, charged with having murdered or poisoned one Michael Weick. Deponent further says that she is informed by her counsel, and verily believes the fact to be true, that a fair and impartial trial of the indictment under which she now stands charged cannot be had in Erie county. That as she is informed by her said counsel and believes to be true, the public press of Buffalo and Erie county have published many and exhaustive articles relating to the aforesaid murder, in all of which she is charged, or it is intimated that she committed the said murder. That wrong, false, malicious and unfounded articles have been published and circulated concerning her, falsely and maliclously charging and intimating that deponent had murdered or poisoned her two husbands, and also had killed one or two children in Germany. That such article was widely circulated within the county of Erie, and deponent verily believes that there could and that there still exist a wide spread and deep set indignation and prejudice against her; so much so that it would be impossible to procure an intelligent, impartial and unprejudiced jury to try her on said charge.

Signed WILHELMINA WEICK.
Sworn to before me, this 7th day of March, 1876.
Ph. Stellwagen. Notary Public

[“Wilhelmina Weick. He Case Called Yesterday in the Court of Oyer and Terminer – A Motion for a Change of Venue on account of “Base, False, and Malicious Charges of the Newspapers, etc. – The Motion Denied – The Trial Put Over Until the Next Term, Etc., Etc.” Evening Republic (Buffalo, N. Y.), Mar. 9, 1876, p. 2?]

FULL TEXT: Buffalo, June 5. – Wilhelmina Weick who was convicted of the murder of her step son Michael Wieck in November last, was this morning sentenced to be hung on the 21st day of July, 1876. the sentence was received with stoical indifference.