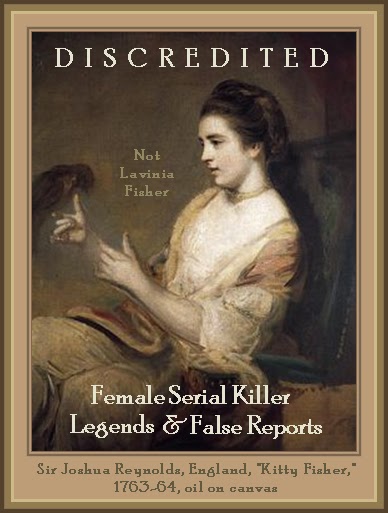 “Lucretia Borgia did not poison anyone and probably did not have an incestuous affair with Pope Alexander VI, her father, art experts and historians said yesterday [Feb. 9, 2010].” [Bruce Johnston, “Lucretia Borgia ‘not incestuous sex-mad poisoner,”The Daily Mail (London, England), Feb. 10, 2012]

“In the years between her birth on November 23, 1535, and her death on December 18, 1623, Anna, was married six times, bat she was never divorced. She disposed of her first five husbands more simply by rubbing them affectionately with an ointment that contained a mysterious and deadly poison.” [William C. Mccloy. “The Wasserleonerg Ghost.  – Woman Bluebeard Of Sixteenth Century. - History Of A Honeymoon Castle,” The Auckland Star (Australia), Jul. 10, 1937, p. 9]

“It is said that if a servant were foolish enough to displease her, they would be hung out of one of the castle windows, the men by their necks and the women by their hair. If the maids did not learn to bend to her will, she would punish them by cutting off their breasts.”

“Her that murdered two husbands and dide at last of the curse of a poor widow woman she wronged.” [archaic spelling and grammar retained]

“Marie-Josephte Corriveau (1733 at Saint-Vallier, Quebec – April 18, 1763 at Quebec City), better known as “la Corriveau”, is one of the most popular figures in Québécois folklore. She lived in New France, and was sentenced to death by a British court martial for the murder of her second husband, was hanged for it and her body hanged in chains. Her story has become legendary in Quebec, and she is the subject of numerous books and plays.” [Wikipedia]

Some accounts describe her as English but unnamed in medical reference books and in English newspapers; story has her murdering 6 husbands, and attempting to kill another, by means of pouring molten lead into the ear. [English Black Widow – 6 hubs, 7th surv (“Ostander’s case” ), 1792]

The “Devil in Petticoats”

“In his later work, a sermon, the Rev. Weems tells the story of Rebecca Cotton, who, in the early 1800s, murdered three of the four men she married. Her schemed and brutal murders only ended when her brother stoned her at the county courthouse in 1807.” [Catherine Thomas, “The Edgefield Legend of Rebecca Cotton,” Aiken Standard (S. C.), Sep. 18, 1990, p. 7]

“The legend of Lavinia Fisher has been told and retold since her execution in Charleston, South Carolina in 1820 and with each telling it has grown more extravagant and further from the truth. Today tourist pamphlets and web sites will earnestly tell you that Lavinia was America’s first female serial killer when, in fact, there is no hard evidence that she ever killed anyone.” [Robert Wilhelm, “The Legend of Lavinia Fisher,” Murder by Gaslight, Oct. 1, 2010]
http://www.murderbygaslight.com/2010/10/legend-of-lavinia-fisher.html

“The basis for most of the White Witch legend seems to come from H.G. de Lisser’s 1928 novel “The White Witch of Rose Hall”. This was a popular novel telling the gripping story of an Annie Palmer that lived a very different life to that indicated by the records available from the time. [The facts about Rose Hall,” Jamaica Travel and Culture]

“The legends have grown about this house and its namesake, twisting the real events into something almost unrecognizable. The phony body count attributed to Delphine seems to increase with each passing year. But the truth shows us that ‘Mad’ Madame LaLaurie was definitely not a saint, even if she wasn’t a murderer (and it is unclear if she was). She was an accomplice and almost certainly a participant in the slow, systematic torture of other human beings, and demonstrated zero remorse for her misdeeds.” [James Caskey, “The Haunted LaLaurie House in New Orleans,” James Caskey, Savannah Author, 13 Oct, 2014]
http://www.jamesbcaskey.com/2014/10/haunted-lalaurie-house/

“Sally Skull may have killed two of five husbands. This is hedged with the usual caveat — she was never charged or convicted. They just disappeared.” [Murphy Givens, “Did husband No. 5 kill Sally Skull?” Corpus Christi Caller Times (Tx.), Jun 29, 2011]

“The statement of Mr. Drake certainly shows that Mrs. York could not poisoned three of the persons she is said to have said to admitted killing, and hence it is very probable that the confession, if made, was uttered while suffering from mental aberration.” [“Discredited – What Mrs. E. R. Drake Knows of the Alleged Poisoning of Six Persons Near Monmequa – Mrs. York’s Death-Bed Confession Discredited.” The Chicago Daily Tribune (Il.), Jun. 17, 1873, p. 2]

“Ellen Liddy Watson (July 2, 1860 – July 20, 1889) was a pioneer of Wyoming who became erroneously known as Cattle Kate, a post-claimed outlaw of the Old West. The “outlaw” characterization is a dubious one, as she was not violent and was never charged with any crime during her life. Accused of cattle rustling, she was ultimately lynched by agents of powerful cattle ranchers as an example to what happens to those who opposed them and whose interests she had threatened. Her life has become the subject of an Old West legend.” [Wikipedia]

“Her husband died mysteriously. It was whispered that she poisoned him … she played every card game well and to fleece the innocent was only pastime for her and her husband. two men who mysteriously disappeared were traced to this deadfall, where they were, in all probability, murdered for their money.” [‘Cattle Queen Kate’ Maxwell,” Salina County Journal (Ks.), Aug. 1, 1889, p. 6]

Recent research holds that she did not personally murder anyone

Troy LaFerrara was a Port Trevorton, Pennsylvania man murdered on November 11, 2013. Miranda Barbour and her husband, Elytte Barbour, were found guilty and sentenced to life in prison in September 2014. The murder is notable because of the claim by one of the killers, Miranda Barbour, that she had murdered at least 22 other people, triggering worldwide news coverage of the case.