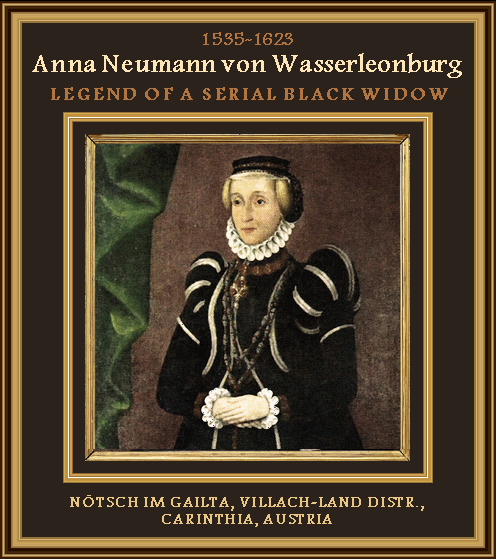 FULL TEXT: Noetsch, Austria – Memoirs of a lady bluebeard lie deep about the castle of the Duke of Windsor chose for his honeymoon home.

Neighboring peasants call the place a haunted house because of the lady who once lived there.

Six portraits hang in the castle halls to remind the former English king of her pictures of the six men who died suspiciously soon after marrying her.

The duke just laughs about it end says something like "Noetsch to you!" to the portraits, but the dark and gory story keeps going the rounds of the countryside as Edward prepares for his marriage to Mrs. Wallis Warfield.

The Lady Bluebeard's name was Anna Neumann. She was born in 1535, the youngest daughter of Wilhelm Neumann, well to da mine owner of nearby Villach. He bought the castle in 1522 and assumed aristocratic airs by adding "Von Wasser-Leonburg," the name of the property, to his own name.

Medieval chronicles frequently mention Anna Neumann as a bad, bad woman, and mothers used to tell naughty children, "the Neumann will get you if you aren't good."

Anna married six times. After each marriage, she had a portrait painted of the husband. Soon after that, the husband would die. She was 82 when she married the last time. Her husband was 30-year-old Count George Ludwig von Schwarzenberg. He died after the customary period.

Anna's own picture hangs in the hall with those of her six mates. It was painted when she was 40; she posed with a daughter of her first marriage, to the long-suffering Jakob van Tannhausen.

The castle is a gray, sturdy pile of masonry crowded against a southern slope of one of the Villach Alps. From its windows one can look into Yugoslavia and Italy, and have a magnificent view of the Julian Alps to the south and pine forests to the north.

To reach it, one takes the train from the border town of Arnold stein to the next station, Noetsch (pronounced almost as though it rhymed with lurch without 'R' sound), and then climbs 20 minutes up forest paths.

There is a garden terrace before the castle, which has a handsome stone gateway and a small courtyard curving right to lead to the living quarters on the second floor. North of the gate is a chapel with a decorated ceiling and a baroque altar.

A massive, tin covered tower dominates the castle. It was built some time after 1570. Left of the castle are work and out buildings, and to the right is the forester's house.

Records dating back from 1250 name the property, which once was called Loewenburg and Leuenburg. Old maps in the Vienna national library call it castle Waserlemburg.

Its history is a fascinating recital that reflects the changing fortunes of this corner of. Europe near the state came to losing a of petty rulers who gave it future supreme court justice and away, lent it, or let in fief; or legal and military struggles for its possession; of an earthquake which destroyed it in 1348, and it lay in ruins for 120 years; of various owners who grew tired of it and let it decay, and of one family line after one another which died out while in possession of the property.

Once it was held in fief by Judge Rudolph thus tells the Freidrich von Zollern (1261-1297) an early member of the line Gene Vidal and I were room- from which the German Hohenzollerns and the former German Kaiser stem.

The present castle was rebuilt in 1747. In 1958 it was offered for public sale, and bought by the mine-owner Roumauld Holenia

Since 1925 Wasser-Leonburg has been owned by Count Paul Muenster, of Hanover, Germany.

The latest of the misadventures connected with the castle occurred just after the Duke of Windsor inspected it early this Spring. A wolf harried animals belonging there for weeks until all gendarmes of the district were called to find and kill it.

FULL TEXT (translated from German): Over time, several historians have dealt with the extraordinary life of Anna Neumann. Because of her six marriages, she is a reason to be looked at more closely.

In addition, she was pretty, extremely rich, and strict and just as the landlady, but also kind to the poor. Despite her huge fortune, she practiced economy and always claimed tithes and interest on time. The great wealth, austerity and many marriages caused jealousy, derogatory criticism and unfavorable talk among the people.

So it happened that she was involved in witch trials several times and had to accept unjustified attacks.

Anna-Neumann was born on November 25th, 1535 as the daughter of the Villach merchant Wilhelm Neumann von Wasserleonburg and his wife Barbara. You spent your youth at this castle in the Gailtal near Nötsch. At the age of 22 she married Hans Jakob von Thannhausen and gave him two daughters - Elisabeth and Barbara. Anna's beloved husband died after three years of marriage. Further child blessings and thus the hope of a male heir were denied in subsequent marriages. Her two daughters, Barbara and Elisabeth, died childless. Barbara still young and single, Elisabeth after her first husband died, after a second marriage.

Anna married Baron Christoph II of Liechtenstein in 1565, whose family had been sitting on Murau for several centuries. The minstrel Ulrich von Liechtenstein (owner of Murau around 1290) was, among other things, the most famous offspring of this old Styrian aristocratic family, which was, however, heavily in debt. Anna acquired a large fortune from the death of her family and became the main creditor of the Liechtenstein family. Since the five brothers of Christoph were unable to pay, the RULE MURAU was sold to Anna in 1574. Her husband Christoph died in 1580.

Two years later, in 1582, the 46-year-old widow married the 56-year-old nobleman Freiherr Ludwig Ungnad von Weissenwolf, a leader of the Protestants. The motives for marriage were certainly not property and money, but probably pleasure in the person and the same belief. Anna's previous two husbands had both been Catholics.

From 1586 until his death in 1610 she was married to Baron Karl von Teuffenbach, whose ancestral castle is located near Murau. Karl took a lively interest in his wife's business, bought land in Kraków, for example, and had the Etrachsee lake built there. Because of her increasing wealth, she was called a witch by ill-willed people. However, there was no conviction because there was no clear evidence and credible statements.

The reason for these witch trials was mostly the talk of the people, among other things a "white liver" was given to her and that she had instigated wizards and witches to make the weather - and this despite the fact that her subjects could deposit their savings with the government and received interest for it.

A modern business woman of our time. When Carl Freiherr von Teuffenbach died, Anna was all alone at the age of 75, without heirs and without descendants.

No wonder that the old lady found a client again - the thirty-year-old Count Ferdinand von Ortenburg from Salamanca. This marriage was actually intended instead of an adoption. Unfortunately, the young count of Ortenburg suffered from constant "physical weakness", which also caused his early death after five years of marriage. Anna was once again at a husband's coffin.

In 1617, at the age of 81, she married the Imperial Count Georg Ludwig von Schwarzenberg. The sixth marriage can also be seen as an adoption.

With the donation certificate of October 20 of the same year, she transferred to him the city and the rule of Murau.

Anna-Neumann died on December 18, 1623 at the age of 88 as a Protestant. For this reason, she was denied a burial site in the parish church. The Archbishop of Salzburg permitted an ecclesiastical burial, but the body was buried in the Elisabethkirche (today the Evangelical Church) so that the head came to rest outside the church. It was not until 1873 that she was finally put to rest in the church of the Capuchin monastery.

Anna-Neumann managed one of the largest properties in Styria during her lifetime. In the year of her death, among other things, Emperor Ferdinand was also in Anna's debt (according to today's value it was around S 620 million = € 45.05 million).

The city of Murau owes the "Mistress of Murau" the re-establishment of the community hospital.
Furthermore, it regulated the wood and wicker servicing for the 101 existing town houses, as well as the financial situation of the parish church.

Some of these servitute still exist today. The former "Lange Gasse" in Murau was named "Anna Neumann Strasse" in memory of the lady of Murau. 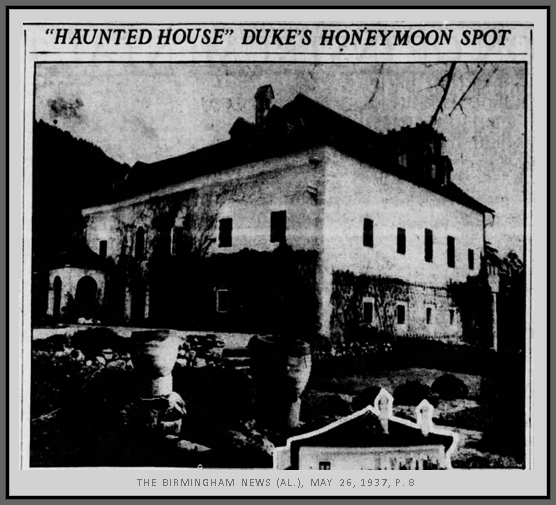 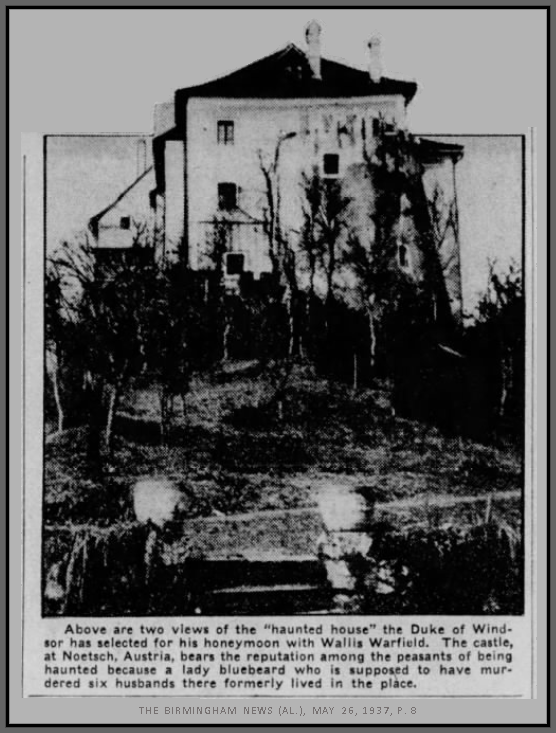