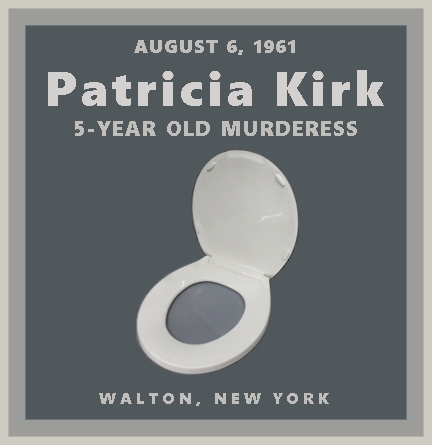 FULL TEXT: WALTON, N. Y. – A 5-year- old girl clubbed her younger sister to death with a toilet-seat cover less than a month after the younger child had been found crammed in an earthenware crock, a district attorney says.

Dist. Atty. Richard Farley said Patricia Kirk may have been jealous of her 2 ½ -year-old sister, Lois, or have held a grievance against her. Lois' crying often annoyed Patricia, he said.

Lois died in a hospital Sunday, nine hours after her parents found her unconscious in a bed she shared with Patricia and a brother, Wesley 3 ½, in the family’s trailer home in this Catskills mountain community.

Patricia admitted hitting Lois on the head with a toilet-seat covers he called it "a pretty stick" sometime between 11 p.m. Saturday and 8 a.m. Sunday, Farley said.

On July 18, he said, Patricia apparently took Lois from the trailer to a nearby shed and either placed or helped her into a 20-gallon crock. When Lois was found by a neighbor about two hours later, her head was covered with blankets and a suitcase. The district attorney said Patricia had a "wild imagination," and was "very mixed up emotionally."

The child seldom talked to her parents. Mr. and Mrs. Wesley Kirk, and would confide only in her maternal grandmother, Mrs. Ezra Burgher of Oneonta. with whom she now is staying, Farley said.