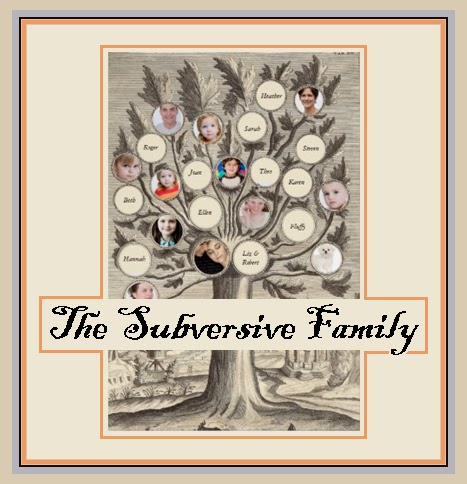 Everybody with an interest in understanding institutional misandry, anti-fatherhood, anti-family ideologies, and “broken family values,” has a short list of favorite books on these subjects. For those whose short list does not include it, I take this opportunity to pitch a truly indispensable bit of brilliant and broadly learned writing that is guaranteed to cast an interpretive light on everything else one might read.

When it was published in England in 1982, The Subversive Family ruffled not a few British establishment feathers. It was a history book on the family – and anti-family ideologies – set in Europe and England, with little mention of the American experience. So perhaps the ten year lapse between the first publication and the American issue might be explained by this fact. But more a likely explanation for the blindness of the American intelligencia to Mount’s explosive counter-revisionist history was that for those who decide what gets published and what does not the books message was just a bit too ...“subversive.” The Subversive Family's arguments and the facts presented therein challenged everything that leftism, progressivism, big government, global big business, radical feminism and social engineering of every shade and color stand for. Better to pretend it was never written.

Although The Subversive Family was indeed published in the United States in 1992 and at that time was recognized as important within the non-leftist intellectual community. Yet it has never gained anything like the wide readership it deserves. The time has now come for the book to be taken up by all those who are reeducating themselves in self governance, liberty and resistance to totalitarianism.

The history of the American family that today available to us in academic and popular publications is a fake one: one which through distortion, omission and frequently outright misrepresentation succeeds not in enlightening us to the true “genealogy of everyday life” in America, but rather offers an elaborately Orwellian narrative that promotes the cultural constructivist ideology of its tenured authors. Mount himself implicitly refereed to the fake American history when he blithely suggested that the American publication of The Subversive Family “might even serve as a prologue to that great history of the American Family which has yet to be written.” (“Preface to the American Edition,” p. ix). 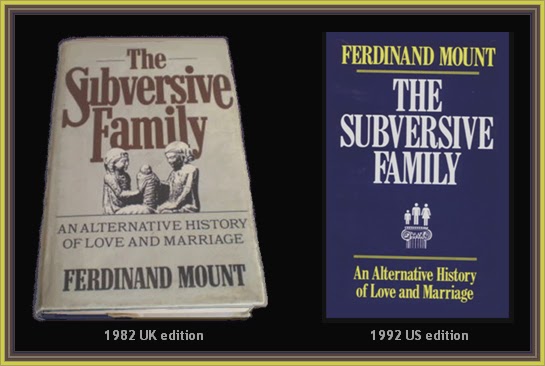 “The Subversive Family was published in England ten years ago but has only recently made its appearance in this country; even so, it is ahead of its time. Ferdinand Mount's thesis is that we have been living through a period of ideologically-inspired attack, meant to persuade us that there is nothing “natural” about love, marriage, the family, or, for that matter, human nature. All these, we are to believe, are constructed by the social system.”  [Commentary Magazine, Oct. 1993, Joseph Adelson, professor of psychology at the University of Michigan and the author of Inventing Adolescence.]

“Mount does a devastating – and highly entertaining – demolition job on fashionable myths about the family. He carries his astonishing erudition lightly and his wit is sharp. With ‘family values’ now a central issue in American politics, this book will be invaluable for those concerned to distinguish sense from plausible nonsense.” – Owen Harries, The National Interest, 1992

► From the 1992 American press release

“The family is a subversive organization.” With these words, Ferdinand Mount begins what has come to be regarded as one of the most influential works of social history in recent times. Published to acclaim in England and throughout Europe, The Subversive Family now makes its first appearance in America. At a time when public discussions of divorce, child support, gender inequality, adoption, care for the aged, and all manner of family issues are taking new and unexpected turns, Mount provides us with a history of the family that will pique the interest, and often the ire, of all parties in the debate.

Mount argues that our society has been shaped by a series of powerful revolutionary movements, the leaders of which, whether they be politicians, theologians, feudal lords, or feminist writers, have done their utmost – ultimately unsuccessfully – to render the family subordinate to their purpose.

He maintains that many widely held beliefs about the family are based on a willful misreading of the evidence promulgated by the Church, the sate, and various ideologues; included among these are that arranged marriages were the norm until this century; tat in earlier societies children were treated as expendable objects; that the nuclear family is a twentieth century invention; and that romantic love never existed before the troubadour poets glorified adultery. Divorce, Mount contends, is no great novelty either.

Irreverent and entertaining, The Subversive Family will jolt the reader into a fascinating reassessment of love and marriage and encourage greater consideration for policies today that support the family. [From the American publisher’s press release, Dec. 14, 1992, The Free Press, New York, NY]

► Selected Quotations from The Subversive Family

p. 7)  More lies are spoken and written about the family than any other subject.

p. 10)  For the history of the family [as written by the professors] is a future [oriented] affair, marked by manipulation, dishonesty and sophistry as well as by cruelty and indifference to individuals.

p. 164)  the family is in permanent rebellion against the public ideology of the Establishment.

p. 173)  The family’s most dangerous enemies may not turn out to be those who have openly declared war. It is so easy to muster resistance against the blatant cruelty of collectivist dictators, even if the resistance is only silent and inward. It is less easy to fight against the armies of those who are ‘only here to help’ – those who claim to come with the best intentions but come armed, all the same, with statutory powers and administrative instruments: education officers, children’s officers, housing officers, architects, planners, welfare workers, and all the other councils, agencies and task forces which claim to know best how to manage our private concerns, and which declare that they are only acting out the principle that ‘we are all members one of another.’

What is objectionable is not merely that these public officials are frequently wrong – though they are. Nor is it that for the most part we have no means of controlling or challenging their activities – though that is often true too. What is always affronting, offensive and distressing is the simple fact of their intrusion into our private space.

p. 213)  And it is this rival power centre which is the real abiding threat in the modern world to all ideologies, religions and patriotisms – namely the family.

p. 228)  But if we concede that traditional marriage, however flawed, could have some emotional life of its own – could indeed scarcely help having some emotional life and generating some kind of two-way relationship between husband and wife – then we ought surely to look at the connection between marriage and society from the inside out. Instead of marriage being a puppet show created by one huge, eternal, all-powerful masculine enemy, entirely for his own pleasure and convenience, we may begin to see marriage as an autonomous, natural and moral institution threatened and often oppressed from outside by a series of enemies thrown up by history. On this interpretation, it is not the family which represents a passing historical phase or sequence of phases – but rather its enemies.

p. 241)  In the medieval and Renaissance texts we have quoted, mutual forbearance and respect are regarded as inescapably connected with and consequent upon the equality of true marriage. The old ideals of marriage were not and are not opposed to women’s rights; indeed, it is in them that we first find those rights asserted. What the old ideals were and are opposed to is egotism, whether male or female. They assume a biologic ethic – a series of duties of nest-gathering, nursing, feeding, protecting and teaching, all involving the sacrifice of self.

A note on cultural misandry: This blog was written in Word 2003, a program which does not recognize the existence of the word “misandry.” The three alternate words offered by Microsoft are “masonry,” “milady,” and “missionary.”

***
For a decidedly Statist anti-family progressive ideological point of view, see:
“The International Child of the Future” – Charles M.Pierce 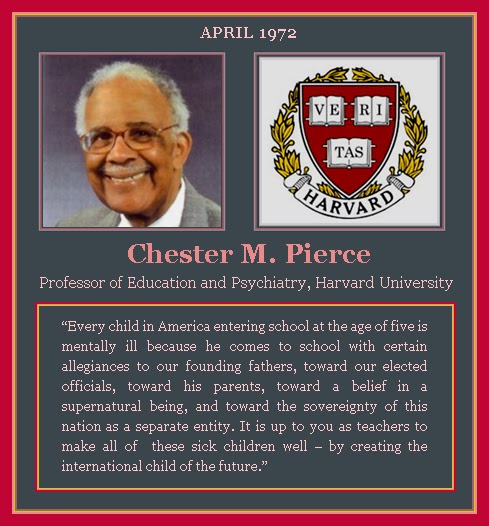 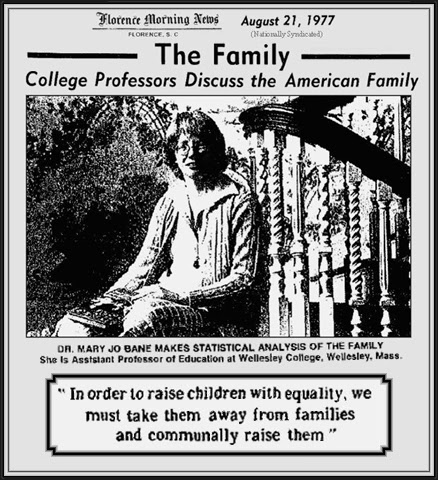