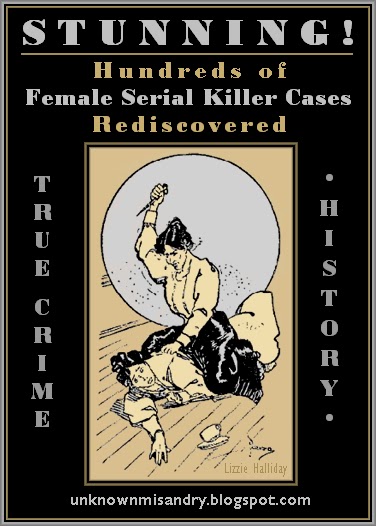 •► Myths about Female Serial Killers ◄•
“I don't think there’s much different between male and female serial killers. I think women have got away with it for a lot longer. ” – Martina Cole, Britain’s most popular crime writer, presenter of BBC series on female serial killers in 2008.

“It is only recently that we have acknowledged that female serial killers, for example, exist. The FBI still thinks of women who kill as reluctant sidekicks.” [Katharine Quarmby, “The women that kill, abuse and torture,” Mosaic, May 31, 2016]

***
Wikipedia currently (Dec. 2011) asserts that “Female serial killers are rare.” “Rare” is a vague term and its use here is not explained. In contradiction to this claim two points should be noted: 1) the vast majority of female serial killers (of victims other than babies, whose corpses were often secretly discarded or destroyed) leave corpses which are believed by others to be the result of non-homicidal causes, thus making serial-killer victims and perpetrators much more difficult to estimate than in cases of male serial killers, where victims are usually easily identified as murder victims. 2) Very little historical research has been done on female serial killers. A study by the editor of The Unknown History of MISANDRY, using only fragmentary English-language newspapers and google as sources, has turned up hundreds of cases beyond the 140 collected in the longest published list of female serial killer cases, that in Peter Vronsky’s 2007 book. A more ambitious research effort should be expected to increase the number substantially above the current count of more than 1,000.
Wikipedia’s assertion that “most female serial killers murder for money or other such material gain” is not a very useful generalization. “Most” can mean 51%, thus “most” can mean little more than “about half.” Cases of prolific serial killers Bathory, Jager, Popov, Souliakotis, Toppan, demonstrate motives which are sadistic or ideological (in the case of Popov). The case of Martí can be classed as profit-motivated yet the child sexual abuse and cannibalism involved suggests the sadistic motive was paramount, or at least equal to the financial. Tann, who is likely to have murdered thousands of babies was also a sexual pervert who employed other perverts to molest the children she sold for profit. She was also ideologically motivated, holding eugenics beliefs about who was worthy and who was not. Tann, like Bathory, another homicidal sadistic sexual pervert, was one of the most prolific serial killers of either sex. Soulakiotis, murderess of 177 young women engaged, as did Bathory, in ritualized torture of her victims. Child-strangler Weber killed for pleasure. Renczi killed sex partners with a motive that is clearly a proprietary; victims were her “possessions” which she refused to share with the world and whose corpses were fetishistically collected. Popov and Foedi each professed misandric motives, with Popov claiming, implausibly, that each of her 300 victims were determined by her investigations to be of the “abusive” sort, thus justifying their murders, while Foedi similarly expressed a hatred of men in general and offered women assistance in murdering any husband they wished to be rid of. Although Foedi was on at least one occasion well-compensated for the crime, on other occasions was willing to murder for a pittance. Popov charged very little for her services, seeing herself as offering a valuable social service to the community. Gaetana Stimoli murdered 23 children in order to exact “revenge” according to her viewpoint and the “Dahr-al-Ahmur Serial Killer” murdered 8 children with a similar motive. Even in cases where profit motive is clear-cut (insurance scams, property inheritances) there needs to be additional severely pathologically antisocial mental factors before there can be a series of  premeditated carefully orchestrated crimes of homicide.

TEMPORARY NOTE: The list is being updated to include all cases (over 860 at this point), regardless of whether the case is included on UHoM, and will include city identifications.