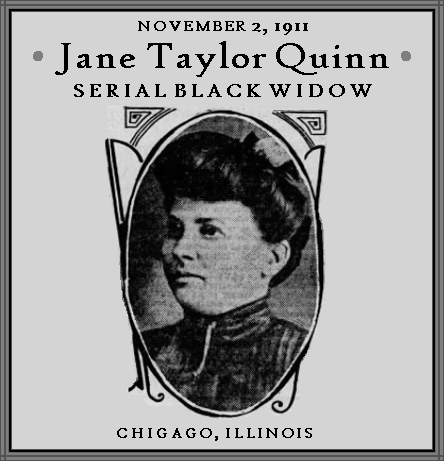 She married John M. Quinn at Kalamazoo, Mich., not longer after Thorpe’s death. Quinn was shot dead by “a burglar” at Chicago Nov. 2, 1911.

FULL TEXT: The deaths of the three husbands of Mrs. Jane Taylor Quinn are being investigated by the Chicago police while she is in a cell. Her first husband died of alcoholism. Her second husband was shot dead and she accused a burglar. Charles E. Thorpe, her step-son, testified that she was alone with Thorpe when he was killed, a few hours before he was to have transferred his property to his son. Her third husband was shot in his Chicago home Nov. 2. She accused a burglar of the deed. A revolver was found later hidden in her bathroom. Two of her husbands were insured in her favor. 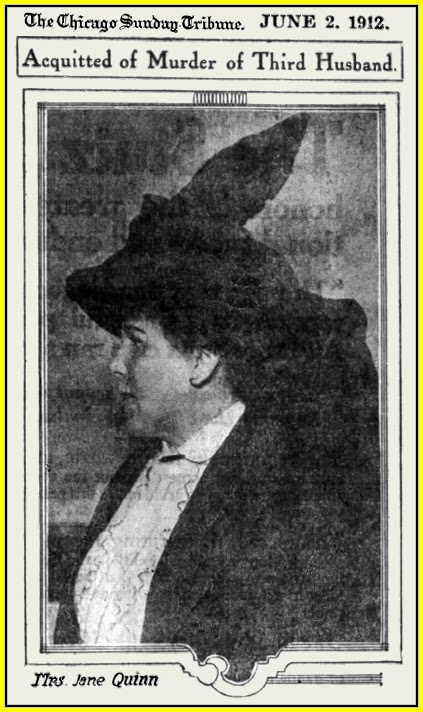 FULL TEXT (Article 2 of 5): Chicago, June 1.—As soon as she recovered from a fainting spell which overcame her when the verdict of not guilty was read, Mrs. Jane Taylor Quinn, acquitted of the murder of her husband, .John Quinn this evening personally thanked each of the jurors who had given her life and liberty.

“I want to thank as much  on behalf of my daughter who is dying, as on my own behalf,” she said several tunes, and tears coursed down her cheeks. “Your judgment has enabled me to go and see her, and it will help her to die happily.”

The daughter, Mrs. Catherine Huber, who is dying in Omaha Neb., was not mentioned while the woman was facing the charge of murder. At times during the trial when Mrs. Quinn bent her head and sobbed, persons in the court room thought it was because the state was piling up irrefutable circumstantial evidence that would meet her death or imprisonment for life.

Today’s verdict proves that the widow’s confidence was not unfounded when she said repeatedly “they will not find me guilty.”

Mrs. Quinn tonight left for Ann Arbor, Mich., to visit Mrs. James Dowling, her sister, who has been with. her during the trial. She will leave there in a few days to visit the daughter in Omaha, who is rapidly losing the struggle against tuberculosis. Elmer Kirby, one of Mrs. Quinn’s attorneys, and the lawyer who defended her when she was accused of the murder of her second husband, Warren Thorpe, accompanied the sisters. Through Attorney Kirby, Mrs. Quinn tonight gave out the following, statement:

“The verdict proved that Mr. Quinn was killed as I said – by a robber. I would never have been charged with the crime had it not been that I was once before unjustly suspected. The first charge grew out of the enmity of the relative of Warren Thorpe. He committed suicide, as was proved at the trial. The second indictment was against me only because of this former unjust suspicion.”

“During his argument the prosecuting attorney spoke of the beauty of circumstantial evidence. I think it is the most diabolical thing in human invention, any innocent victims have been sent to the gallows with the brand of human hatred upon their memories, because of lying circumstances. If I were a state’s attorney, I would never convict any one on such evidence.”

The jury was out three hours today. During that time there was not a moment’s doubt in Mrs. Quinn’s mind but that she would be acquitted. She remarked when the jury was instructed, “they will not be out long. They will acquit me.”

The arrest of Mrs. Quinn after the death of her third husband was made by the police, who thought they had a strong circumstantial case against her. Her first husband, John McDonald died at London, Ont. in 1901, under mysterious circumstances. Her second spouse, Warren Thorpe, was found dead in bed on the morning of June 13, 1903, a bullet wound indicating murder. At that time Mrs. Quinn was charged with the murder, but was acquitted. John Quinn, the third husband, was shot to death as he lay in bed on the night of November 4, 1911. There were powder burns on his night shirt. The revolver from which the shot was fired was found later in the Quinn bathroom, which appeared in a towel which was identified as one Mrs. Quinn had been seen to carry into the bathroom. The revolver was identified as one belonging to a roomer in the house who had mislaid the weapon from his bureau drawer about a week before the tragedy.

[“Jurors - Return Verdict Of Not Guilty In Quinn Case - Acquitted Defendant Faint When She Learns Of Her Vindication - Has Lost Three Husbands In Mysterious Manner. - Declares She Will Now Go To Omaha, Nebraska To See Dying Daughter.” Syndicated (UP), The Lima News (Oh.), Jun. 2, 1912, p. 1] 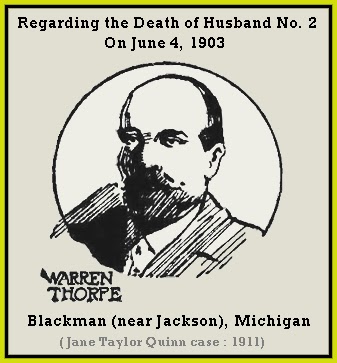 FULL TEXT (Article 3 of 5): The relatives of Warren Thorpe, a prominent Blackman farmer who was found last week in his bedroom, with a bullet through his bead, are not satisfied that he committed suicide, and a searching inquest was begun Saturday. Thorpe, who was upwards of 60 years of age had been married for the third time twenty mouths before his death, and testimony was introduced that the revolver with which he killed himself had disappeared at the time that Mrs. Thorpe had left temporarily last January and that she had been overheard to declare the night before tragedy that he would not swear and curse at her for long. Other testimony was positive that Mrs. Thorpe was out in the yard at the time of the shooting. There are seventeen witnesses subpoenaed.

FULL TEXT (Article 4 of 5): Jackson, Mich. – July 2. Mrs. Warren Thorpe and her daughter. Pearl McDonald, were arrested here to-day on warrants charging them with the murder of the formers’ husband. Warren Thorpe, on his farm, six miles from this city, on June 4, and their examination began this afternoon. Thorpe was found dead in his bedroom with a bullet in his head, and it was thought he committed suicide. His son, however, started an investigation that resulted in the arrest of Mrs. Thorpe and her daughter. From a mark made on the window casing by the bullet. It is reasoned that Thorpe must have been leaning over as if lacing his shoes, when the bullet tore through his head. It is also said that black powder was used in the revolver and the fact that there were no powder stains on Thorpe’s face is pointed out as a suspicious circumstance. Mrs. Thorpe says she was in the yard and that her daughter was at the kitchen door when the shot was fired. Her statements were corroborated by the hired man, who was working in the barn and saw the two women.

FULL TEXT (Article 5 of 5): Jackson, Mich., July 8. – Mrs. Jane Thorpe and Pearl McDonald, her daughter who were arrested last week on a complaint charging them with the murder of Warren Thorpe, the woman's husband to-day were permitted to leave the jail on their own recognizance. An examination failed to produce evidence to hold them. 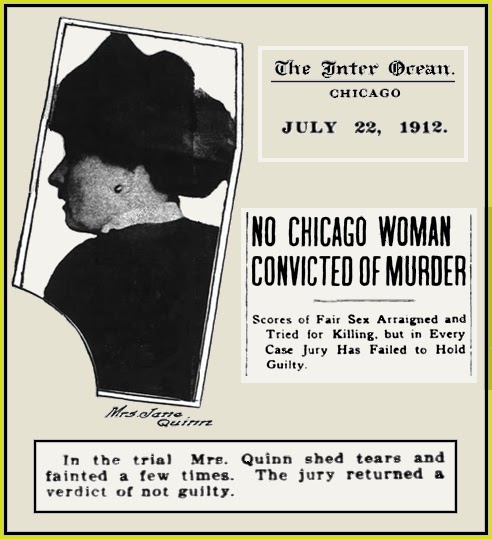 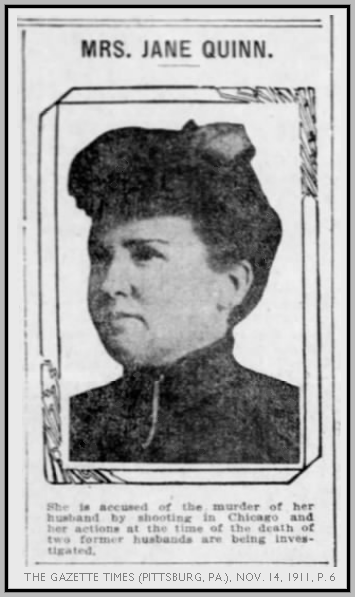 ***
Note: The case is included in the Michael Newton book, Bad Girls Do It (1993), and it erroneously states that "Jane Quinn was speedily convicted at her trial on murder charges, sentenced to a term of life imprisonment." (p. 146) 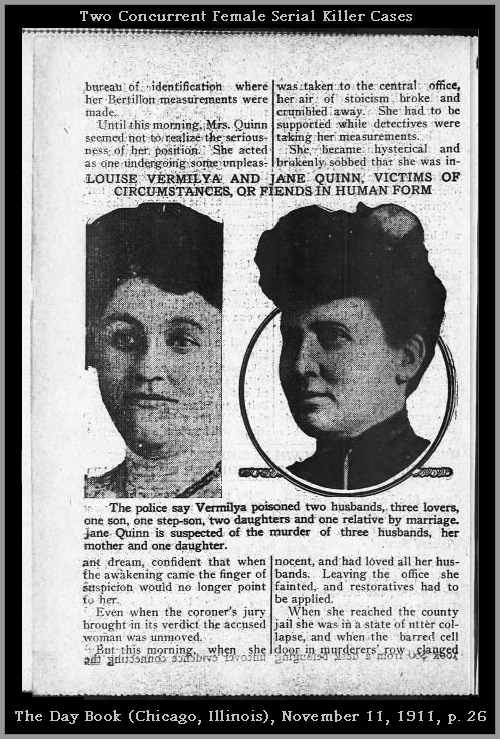 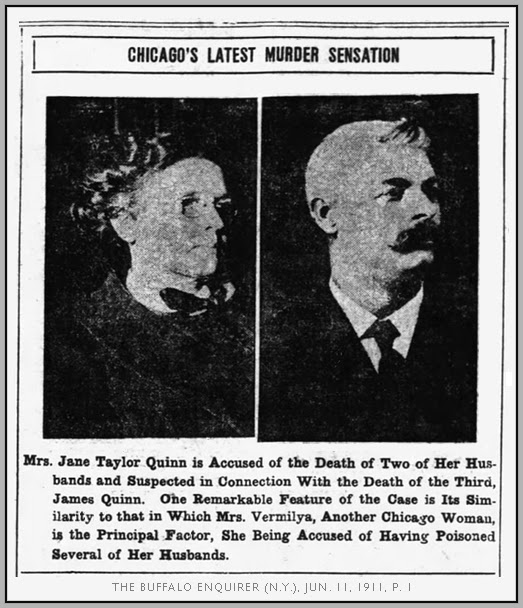 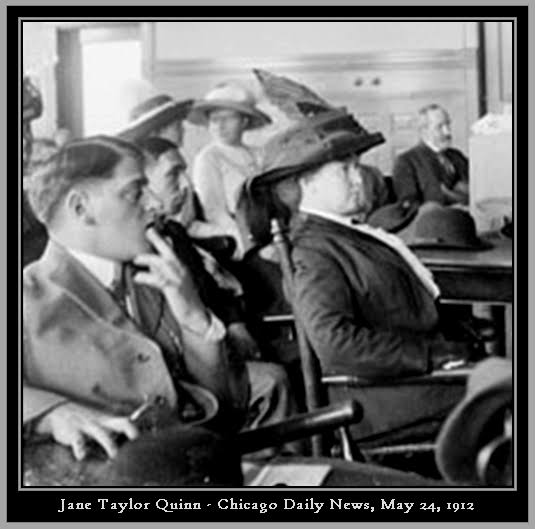 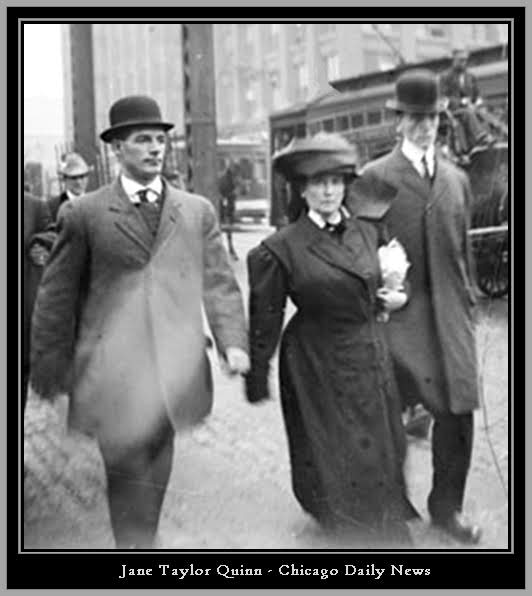 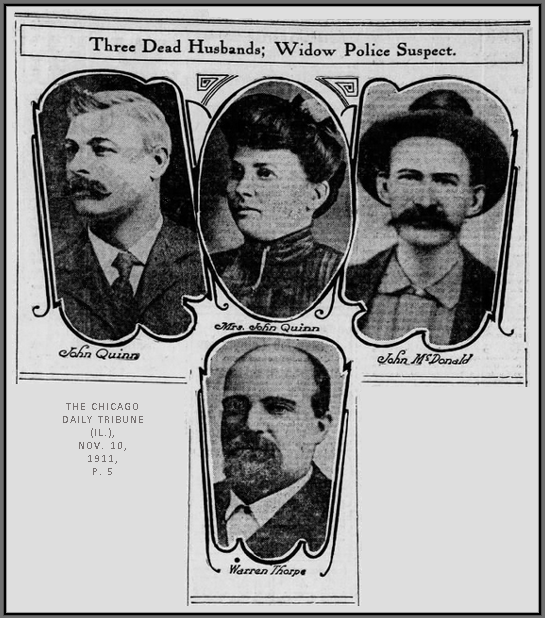 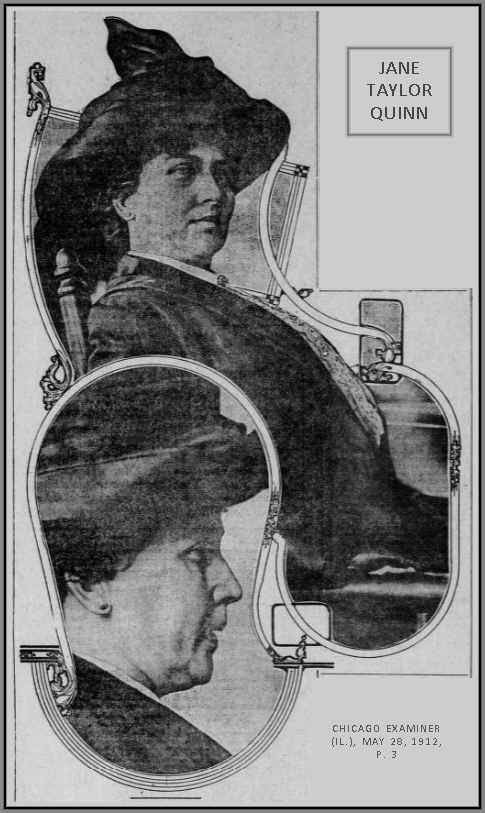 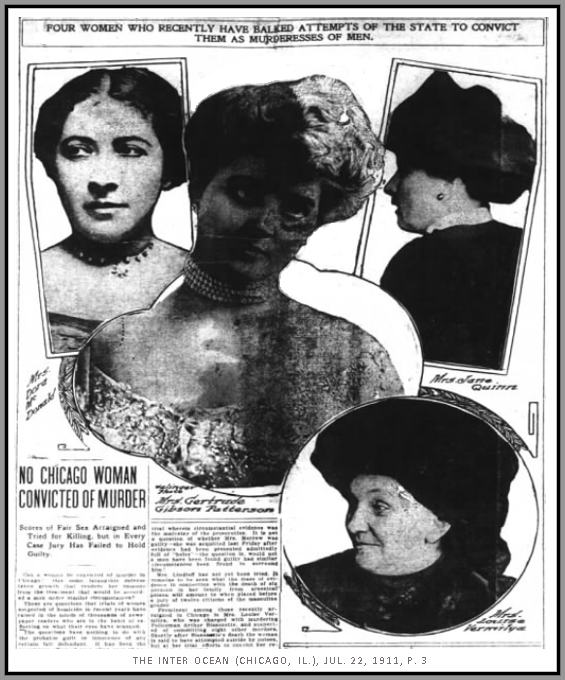 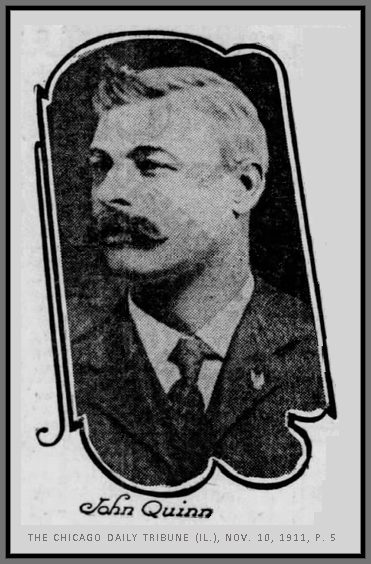 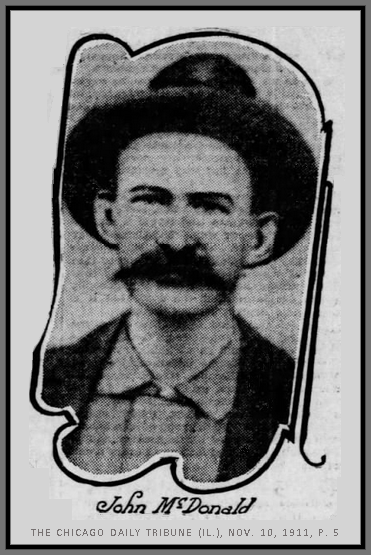 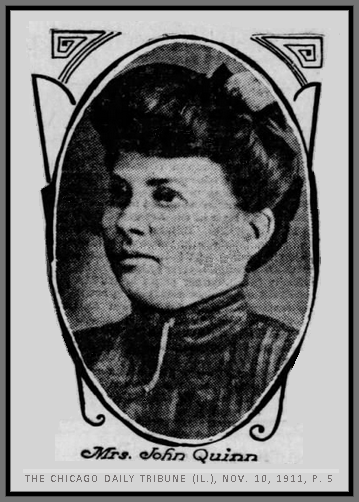 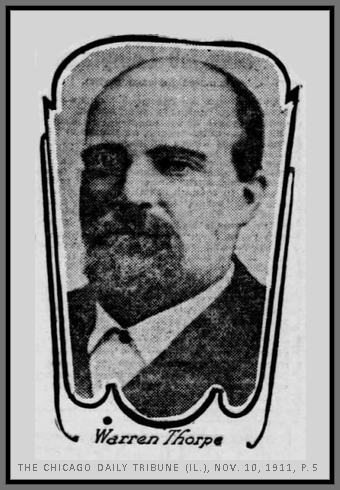 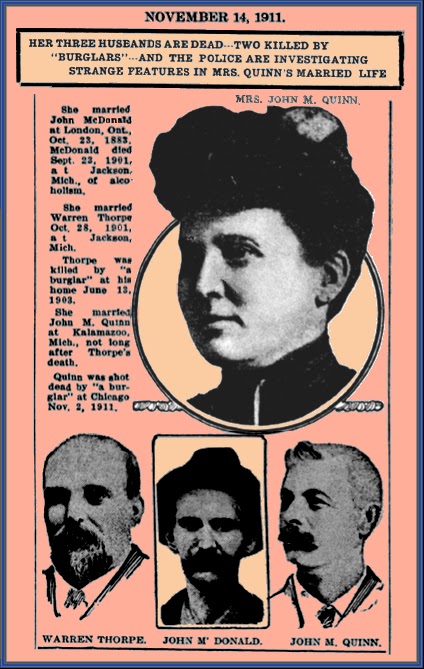