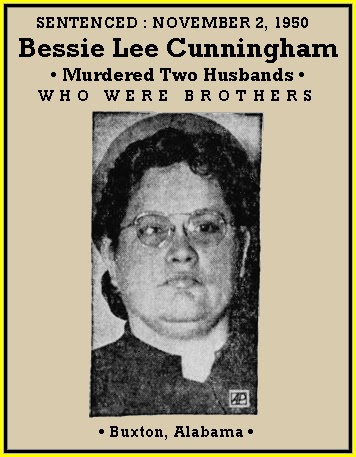 Defense attorneys announced they would appeal the verdict. She was sentenced immediately after the jury finding was announced.

She showed little emotion. Mrs. Cunningham had been charged with poisoning two of her four husbands to collect their insurance, but was tried only for the death of Arthur Cunningham, 44. The dead men were brothers.

The State had demanded the death penalty. The jury deliberated less than three hours.

The Stale charged Mrs. Cunningham killed both to collect life insurance policies—$2,200 on Willie and $5,000 on Arthur.

A State toxicologist told the jury autopsies showed both were given arsenic in quantities more than sufficient to cause death.