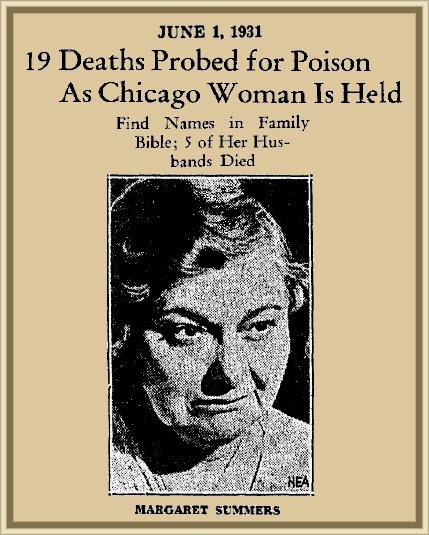 FULL TEXT (Article 1 of 5): Chicago, May 21 – Mrs. Margaret Summers, in whose North av. home five persons have died within the last three years, was questioned Thursday to determine why each one of the five left insurance policies naming her the beneficiary.

“I was just good to them,” she said, “and they expressed their appreciation by taking out the policies.” Later she said she had paid most of the premiums.

The inquiry was launched after relatives brought about the exhumation of the bodies of Thomas, her late husband, and Thomas Meyers, a nephew and last of the quartet to die. Doctors who examined the youth before he died and there were indications of of arsenic poisoning, although an autopsy was deemed necessary to establish this.

FULL TEXT (Article 2 of 5): Chicago. May 27.—While Mrs. Margaret Summers remained in the county jail today tearfully denying that she had poisoned four members of her household in order to collect their Insurance, police began an investigation into the death of a fifth possible victim.

A coroner’s jury yesterday recommended that the woman be held on murder charges as a result of the death of a nephew, her husband, and two roomers by arsenic poisoning.

It was said she collected a total of $6284 in insurance upon the death of these four: Thomas Meyers, 17-year-old nephew; Thomas Summers, her husband; Thomas Lanagan and William Reiman, both peddlers and roomers in her apartment. Their death occurred within the last three years.

The fifth person believed to have been a possible victim was Mrs. Summers’ brother, Louis Meyers, father of Thomas. He died August 1, 1928. His body was ordered exhumed and examined.

Testimony at yesterday’s inquest showed that Mrs. Summers was named beneficiary in 13 insurance policies held by 10 persons. She admitted that she had paid most of the premiums on the policies held by the four persons who died.

C. Wayland Brooks, assistant state's attorney who obtained the conviction of Leo Brothers in the Alfred J. Lingle slaying, is in charge of the prosecution.

FULL TEXT (Article 3 of 5): Chicago, May 27 – Living men whose life insurance policies make Mrs. Margaret Summers the beneficiary added their testimony Wednesday to the post mortem evidence given Tuesday against the woman, accused of poisoning four members of her household.

Her husband, her nephew, two brothers and two boarders all have died within three years – four of them victims of poisoning; the other two of a cause yet undetermined.Samuel Strauss, who drives a cab owned by Mrs. Summers and lodges at her home, was found ill Wednesday. He, too, has signed a policy that would bring her money at his death. He told the prosecutors he had lived with Mrs. Summers since October.

“I have been feeling ill,” said Strauss.” I went to two doctors. I was told I had poisoned tonsils and that I would have to have several teeth pulled. I was told to take soda and a mixture that I think contained pine tar honey. Mrs. Summers prepared the medicine for me.”

Police searched the neighborhood Wednesday in an effort to learn the source of the poison found in the four bodies.

Robert Barker, 50, another policy-holder, said he agreed to Mrs. Summers’ suggestion that he take out insurance after she promised to make the premium payments.

Others still living and insured in the widow’s favor are Mrs. Margaret Ritty, daughter of Mrs. Summers by adoption, and Mrs. Rittty’s three children, all insured for $500 each.

The 19 policies discovered by investigators totaled $9,028, of which Mrs. Summers has already realized $6,700. the woman has started that her husband was insured for $3,000 and as the insurance company records showed payments of only $684 after his death last August the records of other companies are being searched.

The undertaker who directed the funerals of all the men informed the authorities Wednesday of a sixth death, hitherto unreported – that of Mrs. Summers’ brother, John A. Meyers, who died last August.

The deaths were those of lodgers and relatives of the woman, who is already accused of four poison slayings.

The additional names were obtained in a canvass Sunday of five homes in which Mrs. Summers has lived since she came to Chicago from Eflingham, Ill.

Each death, officials said, was entered in the woman's family Bible, which was confiscated.

Further exhumations, the coroner said, may establish whether the deaths of these other persons were accomplished by poison.

Deaths of two of Mrs. Summers’ husbands, bringing the total of her fatal marriages to five, have been disclosed, the coroner said, and as a result the inquiry has been carried back to a period of 25 years ago.

They were Stanley Jones and James Lynch. The deaths of these two antedated those of three other known husbands of Mrs. Summers.

Information concerning Lynch and Jones was supplied by Mrs. Summer’s stepmother, Mrs. William Meyers, of Eflingham. She said her stepdaughter married Lynch almost 30 years ago. A daughter born to the couple died at the age of three and Lynch’s death occurred shortly afterward. Jones was the second husband of the woman.

The investigators are seeking to learn if Mrs. Summers insured these men as she had the others.

The three other husbands whose deaths had been established previously were James Fairfax, Stanley Korzen and Thomas Summers.

Mrs. Summers is formally charged with murder in connection with the deaths of Summers, Thomas Myers, 17, a nephew; Thomas Lanagan, 46, a roomer, and William Heenan, 72, a roomer. She held insurance policies in excess of $5,500 on the four. 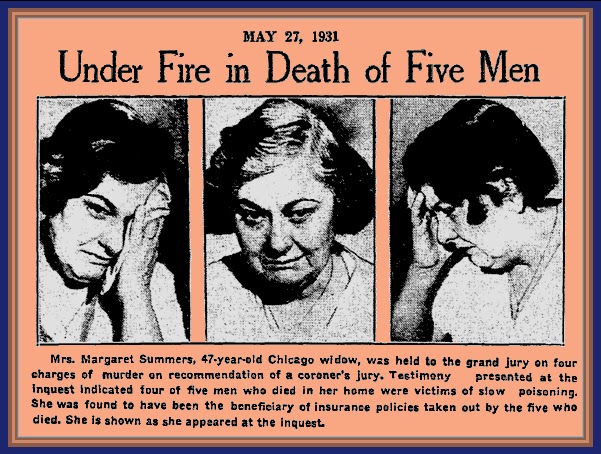 FULL TEXT (Article 5 of 5):  Chicago – Mrs. Margaret Summers, middle-aged widow, was convicted early today of the "flypaper" poison murder of her nephew, Thomas Meyer, 17, by a jury which deliberated less than four hours.

The jury set her punishment at 14 years in the penitentiary.

The case of the gray-haired stoical widow was unique in local annals in the method the state charged Mrs. Summers with employing in the poisoning of her nephew.

The state maintained the widow who has survived four husbands soaked flypaper sheets treated with arsenic to induce the chronic arsenic poisoning which physicians testified caused the boy’s death.

Prosecutor C. Wayland Brooks in his closing arguments charged the widow poisoned her orphan nephew who had given her his daily earnings in order to collect eight insurance policies she had taken out on his life.

The state did not ask the death penalty. The jury which received the case at 9 p. m. last night deliberated until after midnight.

Testifying in her own behalf Mrs. Summers admitted the purchase of flypaper as claimed by the state but said it was obtained last April because “it was pretty hot that month. We were making beer and there were a lot of little flies around.”

Her nephew died last May after a lengthy illness said by physicians to be chronic arsenic poisoning. Mrs. Summers’ attorneys moved for a new trial. 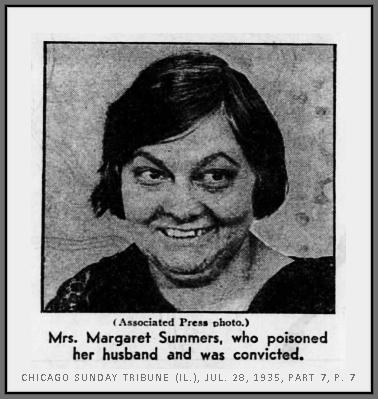 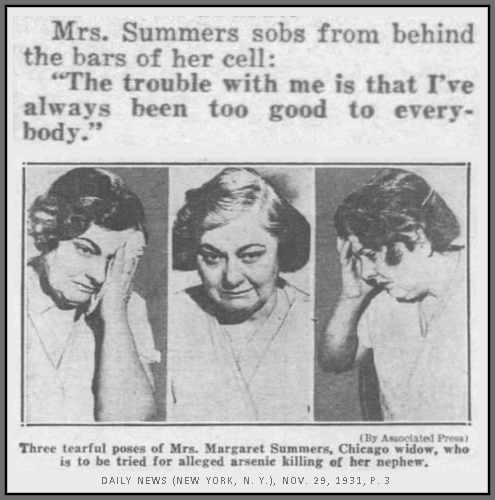 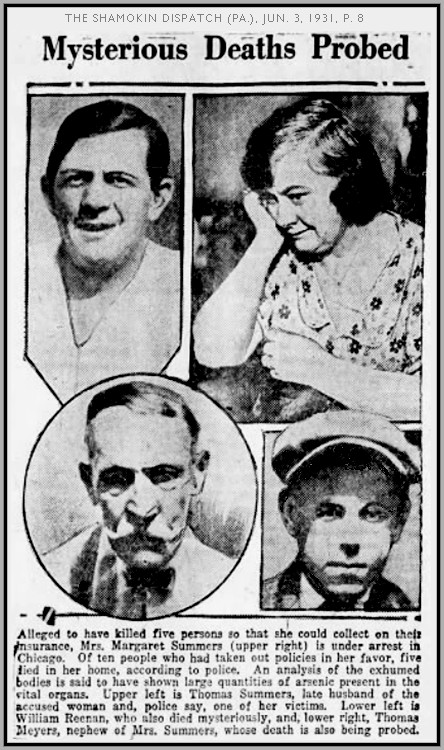 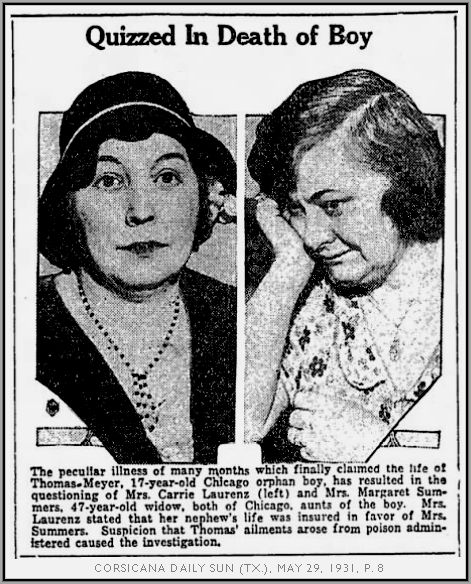 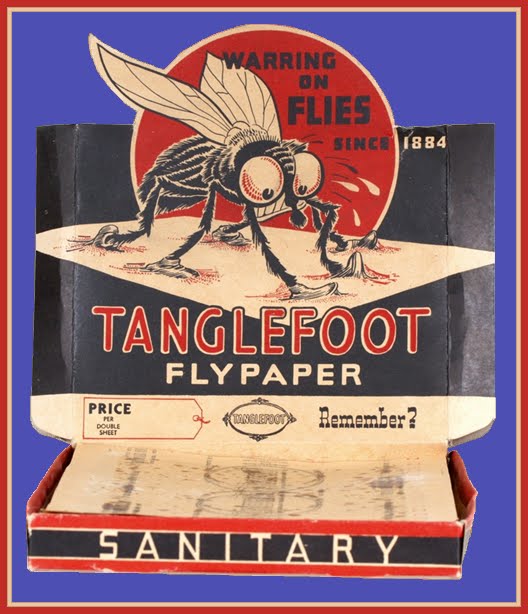