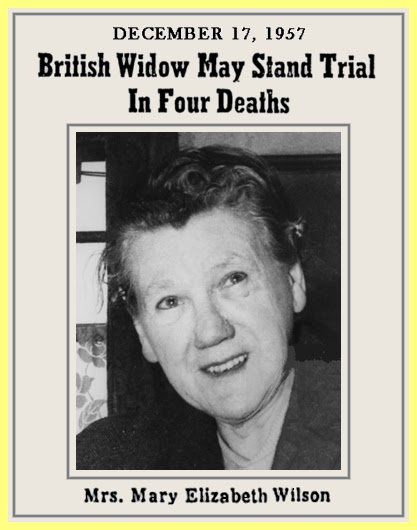 FULL TEXT (Article 1 of 3): Jarrow on Tyne, England – Police asked today for more time to prepare for a hearing to determine if Mrs. Mary Elizabeth Wilson should stand trial on a charge of murdering her third husband.

The mild-mannered 66-year-old widow was ordered held for a further hearing next Monday.

She was arrested after police exhumed the bodies of four men who died in her home within 26 months. The woman had been married to three of them in succession: the fourth was a lodger.

A formal plea has not been entered and police have not yet made public details in the case.

Mrs. Wilson, a stout little woman, has told newsmen she gave the four men “nothing but kindness.”

FULL TEXT (Article 2 of 3): Leeds, England, Apr. 3. – A 66-year-old widow probably wishes she had not joked about the deaths of her three husbands.

The condemned woman is stout Mrs. Mary Elizabeth Wilson, known as the merry widow of Windy Nook, who was convicted of poisoning two of her mates. Windy Nook is the community near here where she used to live and where four male inmates of her house died in just over two years.

The woman’s first husband lived with her 41 years before he expired in August, 1955, but the other two survived the ceremony only two weeks. The fourth man was a lodger who came between husbands No. 1 and No. 2.

One of her gruesome jests which led ultimately to police inquiries was voiced at a reception following her marriage last October to 76-year-old Ernest Wilson. A friend asked what she was going to do with a large number of cakes and sandwiches left over.

“Keep them for the funeral,” she replied.

Wilson laughed with the rest – and lived just 15 days more.

Then it was recalled the widow of Windy Nook made another of her jokes at the registrar’s office, where she had been married and had then returned to record her husbands’ deaths.

“There should be a discount for me,” she quipped.

A gossip flew in earnest, police finally took note. The bodies of Wilson and her second husband – Oliver Leonard, who died in 1956 at the age of 76 – were exhumed. Police pathologists found traces of phosphorous in both.

Then Mrs. Wilson became the subject of a twist in Britain’s new and somewhat complicated homicide law. Killing by poisoning is not a capital murder for which the death penalty is imposed any more.

But the death penalty can be imposed, no matter what the manner of killing, if the accused person is convicted of another murder done on another occasion. And Mrs. Wilson was found guilty of two murders. In the first case of its kind since the new homicide law went into effect a year ago, she was sentenced to death. Her attorneys have served notice of an appeal.

The prosecution made little headway trying to establish a profit motive. Leonard and Wilson left 200 pounds ($560), which the defense dismissed as “paltry benefits.”

“Men like me, and I like men,” the widow of Windy Nook explained in the course of her trial.

FULL TEXT (Article 3 of 3): London – The "Merry Widow of Windy Nook" escaped the gallows today. Mrs. Mary Elizabeth Wilson, sentenced to death for the murder of two of her three husbands by cockroach poison, was granted a reprieve by the Home Secretary.

The first woman to be sentenced to hang under Britain's new Homicide Act, Mrs. Wilson had already had one appeal turned down by the court of criminal appeal.

The reprieve meant that Mrs. Wilson would serve a life sentence, it was understood.

The murderess died aged 70 in Holloway Prison in London.