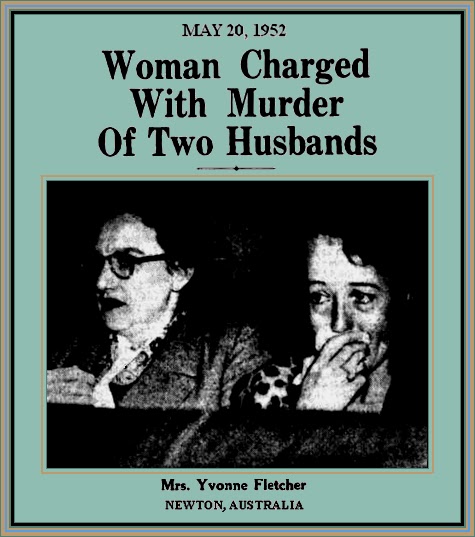 HEADLINE: Woman Charged With Murder Of Two Husbands: Mrs. Yvonne Fletcher, 30, a domestic, of Ferndale Street, Newtown, was charged at Central Court of Petty Sessions yesterday with murdering two men to whom she had been married.

FULL TEXT: The police allege that she poisoned them. Unkempt and red-eyed from crying, Mrs. Fletcher was remanded in custody until next Monday.

She wept while the charges were read in court.

The charges said that –

Asked for some details of the allegations, Sergeant Bush said: –

The allegation is that the first man died in 1948 as a result of poisoning. The defendant was his wife.

”We say the second man died in a similar manner in March this year when the defendant was his wife.”

The Magistrate, Mr. C. F. Denton, S. M., asked Mrs. Fletcher if she wanted to make an application for bail.

She did not seem to understand what he meant and a policeman explained to her.

He asked that if an application for bail was made later, the officer in charge of the inquiry. Detective Fergusson, should be communicated with.

The magistrate said he would have the police objection to bail and the request noted.

Mrs. Fletcher was arrested at her home early yesterday.

The charges against Mrs. Fletcher mark the climax of two months’ intensive investigation by Detectives D. Fergusson and F. Krahe.

Superintendent J. Wiley ordered the investigation when doctors at Royal Prince Allred Hospital refused to sign a death certificate for Fletcher on March 23 this year. The next day the Government Medical Officer, Dr. Percy, and Dr. Stratford Sheldon held a post-mortem.

The detectives were pre- sent, but the examination did not reveal the cause of Fletcher’s death.

The contents of the stomach and certain organs were then analysed by Mr. T. A. McDonald, at the request of the Government Analyst, Dr. Taylor.

On April 21, the detectives applied for and were granted permission by the City Coroner, Mr. Forrest, to exhume the body of Butler.

This was done at Rookwood Cemetery in drizzling rain at dusk on the same day.

Later, at the City Morgue, Dr. Percy and Dr. Sheldon examined the remains.