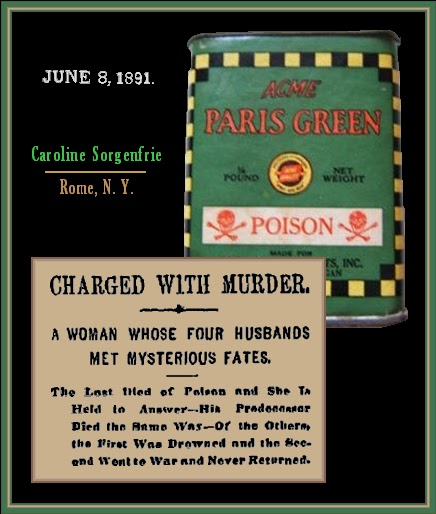 FULL TEXT: ROME, N. Y., June 7.—The authorities of Oneida County have a case on their hands that strongly points to murder. Early on the morning of May 26 John Sorgenfrie, a man over sixty years old, was found dead on his bed at his house on Laura street in Utica. At first sight is was very apparent that his death was caused by Paris green. Sorgenfrie had eaten a hearty supper the night previous, and there were indications that there was plenty of the poison around the house. At first it was thought that Sorgenfrie had committed suicide, but upon investigation Mrs. Sorgenfrie, her sons and others, told contradictory stories, and Mrs. Sorgenfrie was very nervous over the matter. The Coroner’s inquest was adjourned several times, and at each session evidence was presented pointing towards Mrs. Sorgenfrie as the person who administered the Paris green, and that from the conflicting testimony given by the widow of the deceased they hold her as the person who had administered it to him. Mrs. Sorgenfrie was immediately arrested and placed in jail as the murderer of her husband. The woman has had four husbands, two of them dying of poison.

Mrs. Caroline D. Sorgenfrie was born in Dearfield fifty years ago. Her maiden name was Wilsey. Her first husband was James Staley, by whom she had two children. He was drowned at Potter’s Bridge thirty years ago, whether by accident or otherwise was never determined, but it has been said he was pushed into the canal. The widow married Henry Way, who served in the civil war and never returned.

In 1881 the woman, as that time forty-three years old, married Ernest W. Schroeder, aged seventy-six. On the morning of May 11, 1883, Schroeder breakfasted on fresh pork, and became so ill that medical aid was summoned, but in spite of his treatment Schroeder died at 6 o’clock in the evening. An autopsy was held and the examination revealed the presence of arsenic in the stomach. The inquest, however, was a farce, no witnesses having been called except the physician. Neither Mrs. Schroeder nor her son were asked to testify, though the latter had been in conversation with the deceased.

Her last husband, John Sorgenfrie, boarded with her two years before they were married, which was about six years ago. They quarrelled frequently and once separated for a short time. Sorgonfrie said he would will her his property, worth about $2,000, when she married him.

About a week previous to her husband’s death the woman became very jealous of him. She found him in the company of a disreputable woman, who told Mrs. Sorgenfrie that she was going to have him live with her. Mrs. Sorgenfrie said that she had a quarrel with her husband the night before he died and that he threatened to kill her; that he came home drunk and would not eat any supper, and said to her, “I got full to kill you.”

[“Charged With Murder. - A Woman Whose Four Husbands Met Mysterious Fates. – The Last Died of Poison and She Is Held to Answer – His Predecessor Died the Same Way – Of the Others, the First Was Drowned and the Second Went to War and Never Returned.” The World (New York, N.Y.), Jun. 8, 1891, p. 5]

Other spellings of “Sorgenfrie” appear. Examples:

“Saukenfried” (“The Husbands Die Fast – A Suspicion That They Were Poisoned. – Three Dead, One Ran Away. – Now the Coroner Will Endeavor to Find Why the Woman Changed Partners so Often.” The Philadelphia Record (Pa.), May 27, 1891, p. 1)