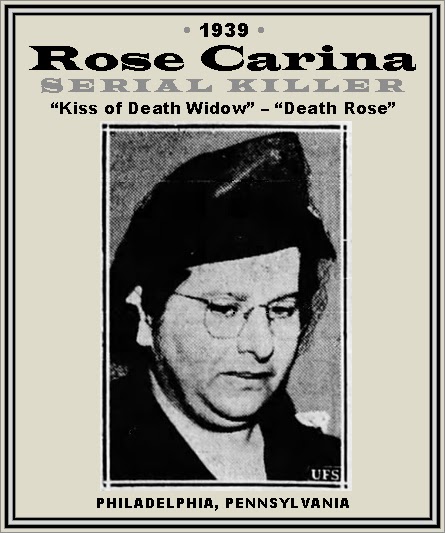 FULL TEXT (Article 1 of 2): New York, May 18 – The elusive “kiss of death” woman, Mrs. Rose Carina, known to have had at least five husbands, three of whom died under mysterious circumstances, was arrested today by federal agents in connection with the Philadelphia investigation into a mass murder syndicate.

Dwight Brantley, F. B. I. agent in charge of the New York area, declined to disclose where she was taken into custody nor where his agents picked up the trail of the woman sometimes known as the “rose of death.”

Philadelphia authorities have named her one of the principal actors in the bizarre crime drama. Police Captain James Kelly of Philadelphia described her as the “professional widow” used by the ring to trap prospective victims. She is wanted, he said, on a warrant charging conspiracy.

Twelve widows linked with the ring already are in custody. Some 59 deaths have been attributed to the “murder-for-insurance” conspirators and authorities conceded there might be many more, as almost unbelievable new ramifications are uncovered practically every day.

Besides scores of new leads developed through confessions of ring members in terror of the electric chair, the police have been greatly aided by anonymous letter writers. Police said checks have proved about 75 per cent of these tips to be accurate. 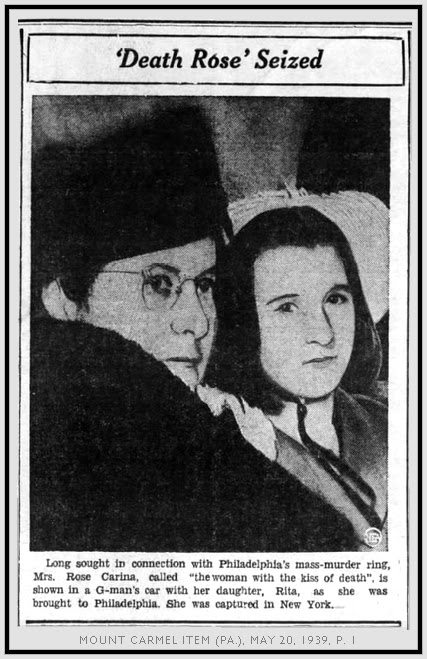 Rose Carina was sought specifically for questioning in the death of Pietro Stea, a grocer who died three years ago of what was then certified as “heart disease’’ and “diabetes.” Stea was her fourth husband.

Her first was Antonio Carbonaro, from whom she was divorced. Carbonaro now lives near New Sharon, N. J. Her second spouse was Dominick Carina, who died in 1931. Her third husband, prosper Antonio Lesi, died two years later. After Stea’s death in the fall of 1934, Rose married Isadore Tropea, now a semi-invalid, suffering from a stomach ailment. 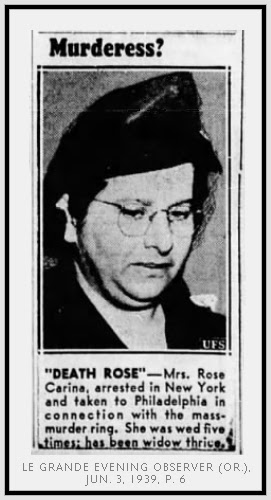 FULL TEXT (Article 2 of 2): Philadelphia, Dec. 4.— The second acquittal verdict in Philadelphia’s mass murder cases cleared Mrs. Rose Carina of one death but failed last night to give her freedom.

She still must stand trial in the killing of another man police say was among “scores” of victims of a ring that plotted deaths in eastern states for insurance.

Mrs. Carina cried “Oh, God bless them all” when a jury acquitted her last night of poisoning Pierto Stea, one of her five former husbands. Then she collapsed.

Another woman was freed by the first acquittal in the trials. Five of the other 23 defendants were convicted, eight pleaded guilty and eight await trial. Half of those to face a jury are women.

FULL TEXT (Article 3 of 3): The bizarre arsenic murder-for insurance ring which preyed on almost 100 victims in Philadelphia early seven years ago was back in the limelight today with the surrender of the last of the accused group.

The defendant, Mrs. Josephine Adla, 43 of South Philadelphia, voluntarily gave up it the district attorney's office after being a fugitive from justice since her indictment in 1939.

She is charged with being a participant in the arsenic slaying of Pietro Pirolli, 53, who died April 21, 1935. His body was exhumed four years later and chemists said it contained sufficient arsenic even then  kill two persons.

Mrs. Sadita, mother of five, said she had been working on a farm in Virginia since she fled jurisdiction. She was indicted in the Pirolli slayng along with Mrs. Grace Gioventta and Mrs. Rose Carina, known as “The Kiss of Death.”

Mrs. Giovanetta originally was convicted by a jury with the death penalty, but was granted a new trial and pleaded guilty to second degree murder. She was given a five to 10 year sentence and since as been released from prison. Mrs. Carina was acquitted.

Eleven men and 14 women were indicted as participants in the ring. 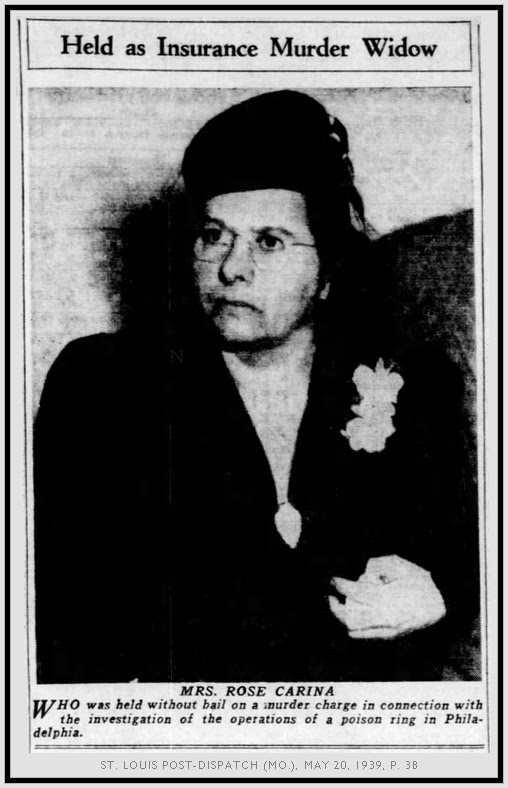 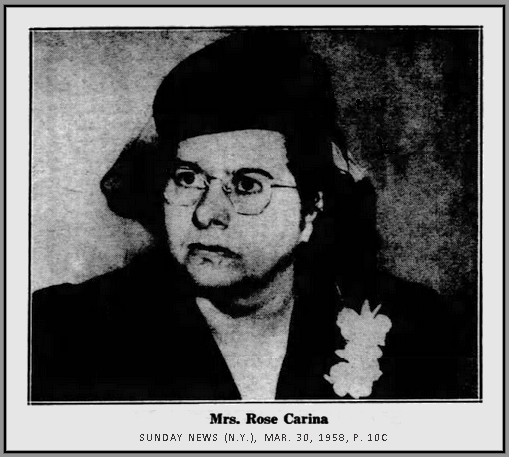 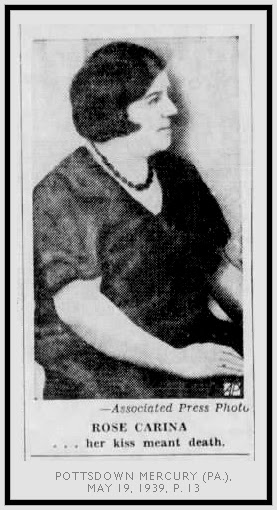 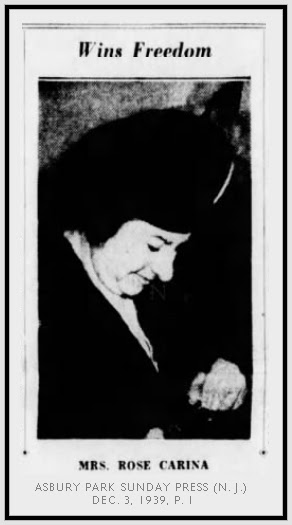 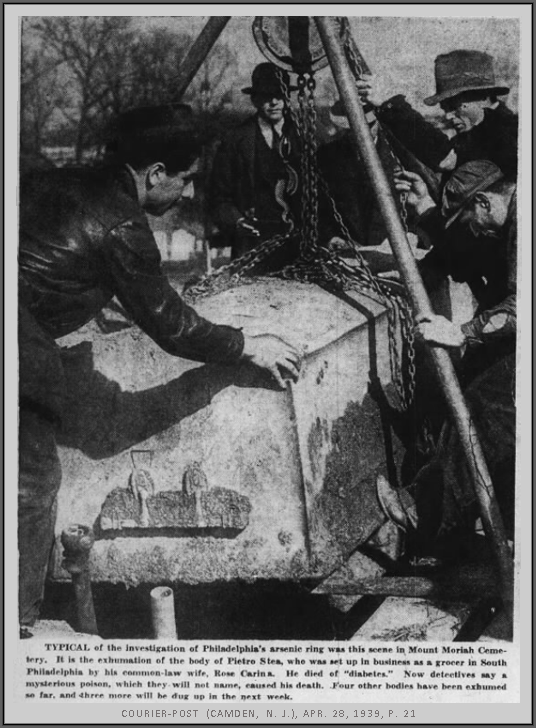 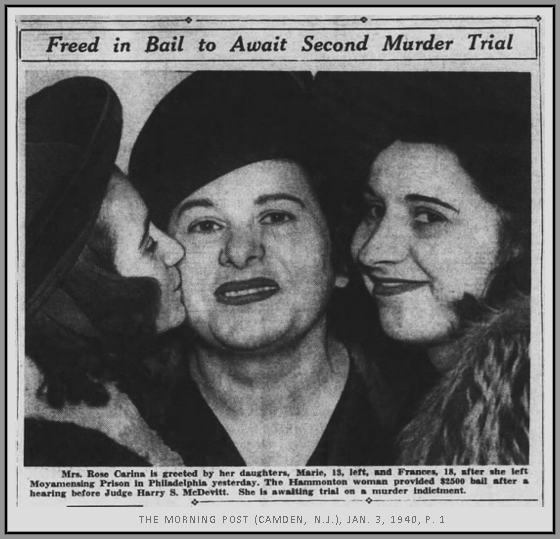 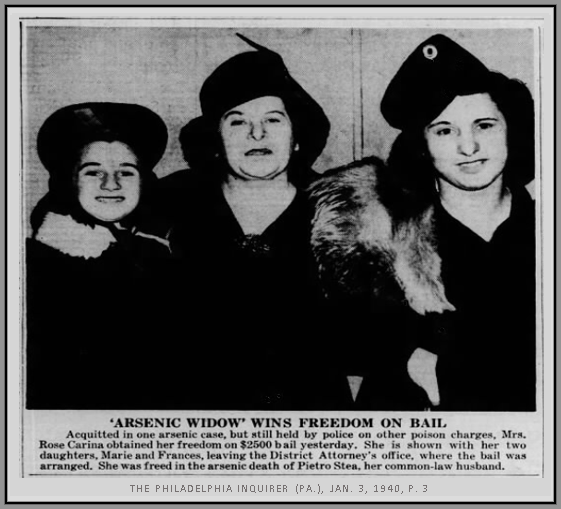 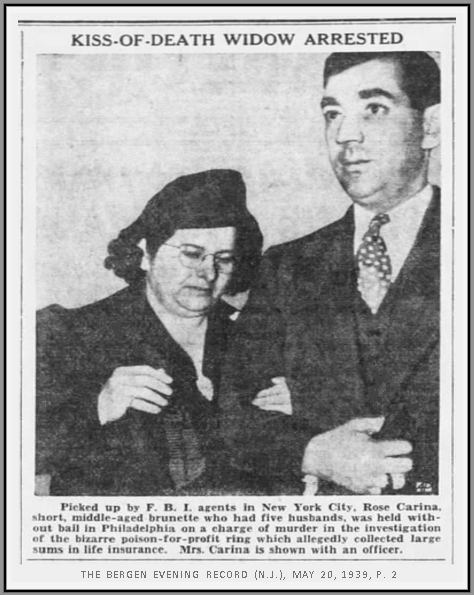 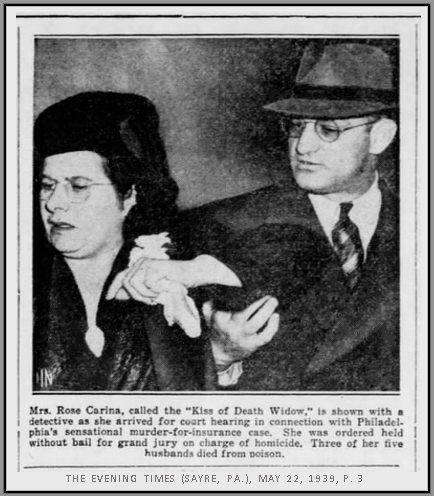 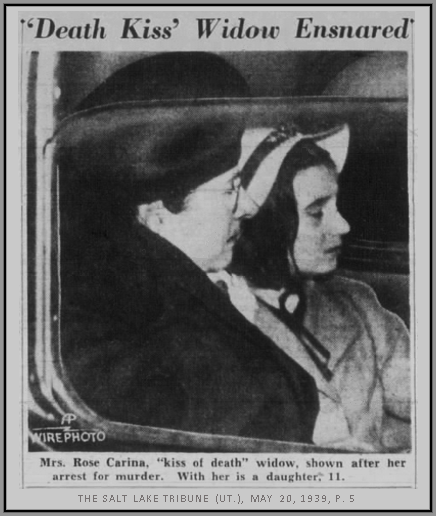 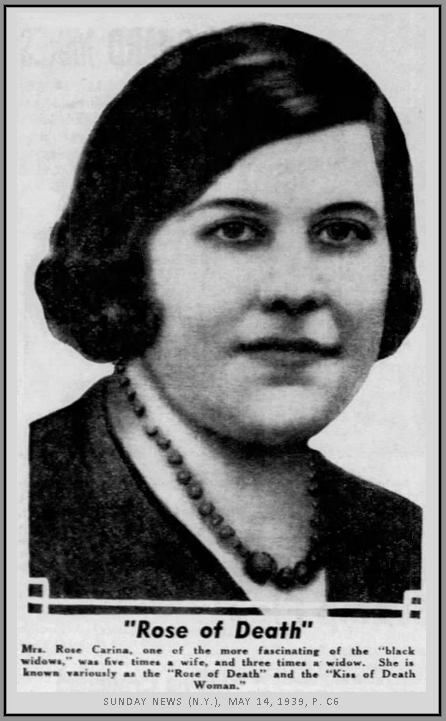