Helena, Montana - Domestic Violence Was Not Tolerated by Society in 19th Century America - 1883 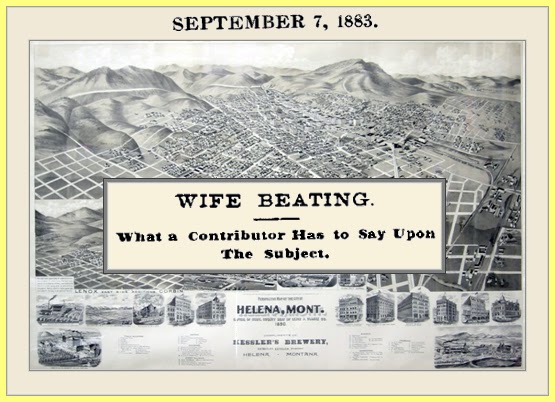 NOTE: Here is yet another piece of evidence, among countless others that disproves the incessantly repeated feminist lie that asserts that domestic violence was tolerated by society before the 20th century.

The truth is that, like other types of sociopathic behavior, perpetrators of domestic violence against women were part of a small minority, were considered criminals, And were loathed, like other criminals, in their communities.

To the Editor of the [Helena, Montana] Independent.

This article is not induced on account of any existing or threatening evidence of the loathsome crime of wife beating—for it is a recognized fact that, as a rule, the men who have wrested this Territory [Montana] from its normal wilderness state, and by their energy, daring, brains, and labor, have brought it to its present condition of culture, refinement, and prosperity, are brave, generous, honest, and chivalrous, everything in bold contrast with the idea of wife beaters; but it has become apparent that, as now and then a sneak thief insinuates himself upon an honest assemblage, as a leper is found amidst a wholesome community, as a neighborhood is sometimes startled by the appearance in its midst of small pox, so we are obliged to own the fact that occasionally stalking upon our streets, assuming the airs and manners of men, are wife beaters. The fact might and would be more humiliating to the men of this community, but that we know, and boldly assert, that this contemptible class of criminals are fewer in Montana than in any other land under the sun. Probably no class of men are so intimately acquainted with the extent and enormity of this character of crime than the doctors. It is they who dress the wounds of the poor victims; who hear the truth from the mouths of their weeping wives before their coward husbands have had an opportunity, by threats, and promises to close them against the officers of the law. No other class of men know better how difficult it is to bring a wife whipper to justice in our courts. In view of this fact, and with a sincere attempt to avoid this evil, one of our eminent physicians, who was also a member of the late Legislative Assembly, introduced a bill in the Council making wife beating a special offense and visiting upon that crime penalties proportionate to its enormity. The wife-beater was represented in the lobby, and Dr. Mitchell's bill was defeated. Other physicians there have been who, moved by the pitiful condition of their bruised, bleeding, and weeping patients, victims of this abnormal condition of manhood, have failed, after earnest and disinterested efforts, to bring the wife-beater to justice. Should any wife-beater doubt the assertion, the writer will cheerfully produce and publish the de tails of at least one recent case of the kind. It may be asked, why is it that this crime of wife beating should be classed as a crime peculiar to itself?

It is, first, because of the peculiar relations existing between the degraded wretch and his victim. Abler pencils than mine have portrayed their sweet, and bitter, and social, and legal relations, (as the case may be), so that I shall not attempt to enter into a discussion upon marital relations. Every reader knows how a wife-beater may craftily shut the mouth of his victim by prayers, supplications, appeals, and, above all, promises of a better future. For, my dear reader, the wife-beater is not an ordinary criminal. The ordinary criminal has, as a rule, been led by force of circumstances from a condition of integrity to bad, and worse, until au overt act of crime was committed and punishment followed. lie had, and still retains, many sterling elements of manhood in his nature; he is capable of reformation. Stained though he may be, yet he may regain civil and political rights. Society, in remembrance of the fact that he owned the birthright of manhood, may forgive his error and receive him as an erring and reformed brother. But that the man who raises his hand to beat his wife, who can strike down the mother of his children – the wife-beater – was, from the beginning of his history, utterly destitute of every element which the laws of the land, Executives exercising the pardoning power, and society at large, recognize as possible redeeming traits in other criminals.

Other criminals have some excuse for their crimes; the thief may profit by his gains; even the murderer expects some benefit from his crime—all have some, though little, excuse. The wife beater has no excuse, except that of total depravity; he was at heart a wife-beater from his cradle, and he knows it. No wife-beater is mistaken in himself. While these criminals dispense themselves among and seem a part of the mass of humanity, they are in fact a community by themselves. The wife-beater is sui generis; he conceals himself among the crowd for years and years, but at length the fact is disclosed. The wife-beater is cunning, crafty, often a successful business or professional man for a time, more often a politician; he prays upon the credulity of the populace. Wherever bombast, braggadocio or check will subserve his purpose he produces an unlimited supply, but let disaster overtake his schemes, let him meet men with whom he is unable to cope, and whom he cannot scare, be thrashes his wife—he revenges not himself on men.

This much has been said at this time upon the subject of wife-whipping because the law seems inadequate to correct the evil, and wife-whippers reach further into our political atmosphere than honest men imagine, so that the practicability of making this crime special on our statute is vain.

Public opinion must correct the evil. Let wife-whippers know that they will not be countenanced among any classes of society, social, business, political, or otherwise, and soon wife-whippers will find their level below the incorrigible wretches of all other classes of criminals. * *