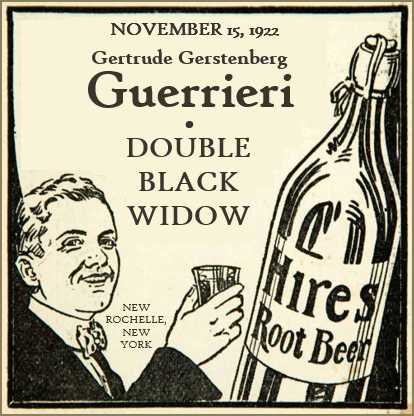 FULL TEXT (Article 1 of 4): An inquest into the death of Emil J. Gerstenberg, who died Thursday, August 8, on his farm near Coxsackie, under mysterious circumstances, after drinking a bottle of root beer, will be held by Dr. I.E. Van Hoesen, coroner for Greene County on Monday. Coroner Van Hoesen said last night that Gerstenberg's death was undoubtedly due to poisoning, the nature of which he did not know, under circumstances that seemed to him suspicious.

Mrs. Gertrude Gerstenberg, who separated from her husband about eight weeks ago, told of happenings around the home, saying that since she had left her husband that she had noticed the children were sickly while on the farm; that she herself was twice shot at by a mysterious assailant seven weeks before she finally left, and that insurance papers to which the children were entitled, as well as a note which she had signed, were missing from her husband's possessions and that when she tried to establish herself in her husband's home and look after her children on Thursday, the Gerstenberg brothers said that there was no room for her children or for her on the farm.

That she had received a letter in red ink commanding her to leave Coxsackie and when she failed to comply with the demand two shots were fired at her and she left him because she was afraid of her life. She owned half interest in the farm and sold it to her husband for $210 cash and a note for $90.

Her story of the shooting affray was substantiated by District Attorney Curtis, who said that for two weeks the authorities looked for the assailant without result.

FULL TEXT (Article 2 of 4): Emil J. Gerstenberg of Coxsackie, who died on his farm last Thursday after drinking poisoned home made root beer was an alien enemy, born in Germany, and bad failed to register as an alien, according to District Attorney Harry McK. Curtis of Coxsackie.

He said Gerstenberg had seven sticks of dynamite hidden on his farm, with which evidence has disclosed he intended to blow up the farm house and barns, which he believed A. Mitchell Palmer intended to seize because he was an alien enemy.

Mr. Curtis and a state trooper visited the farm yesterday and found the dynamite hidden under a barrel.

Lester Gerstenberg, thirteen years old, son of the dead man, told how his father had the dynamite on the farm and that when the child discovered it, his father promised him a bicycle if [he] would promise not to tell of it to anyone. Gerstenberg’s two brothers, Otto and Richard, are naturalized citizens. The coroner’s inquest will take place next week.

FULL TEXT (Article 3 of 4): New Baltimore. N Y, Nov 15 – Mrs. Gertrude Gerstenberg Guerrieri, formally charged with the murder of her first and second husbands, and her son, Lester, 17, charged with the murder of his stepfather, were today in jail at Catskill, awaiting action of the Greene County Grand Jury. Both pleaded not guilty when arraigned before Justice of the Peace Mansfield here yesterday.

Emil Gerstenberg. the first husband, died four years ago, when Lester and his sister, Gladys, put poison provided by their mother in a 'bottle of root beer which their rather carried with his lunch, according to confessions made and signed by the boy and his I sister.

Michael Guerrieri, the second husband, was shot while hunting near New Baltimore a few days ago. and Lester, according to his confession, accomplished this murder by shooting his father with a shotgun. Mrs. Gerstenberg Guerrieri, her children say, instigated and planned both deaths.

Emil Gerstenberg, the first husband, died four years ago when Lester and his sister, Gladys, put poison provided by their mother in a bottle of root beer which their father carried with his lunch, according to confessions made and signed by the boy and his sister. Michael Guerrieri, the second husband, was shot while hunting near New Rochelle a few days ago, according to his confession, accomplished this murder by shooting his father with a shotgun. Mrs. Gerstenberg Guerrieri, her children say, instigated and planned both deaths.