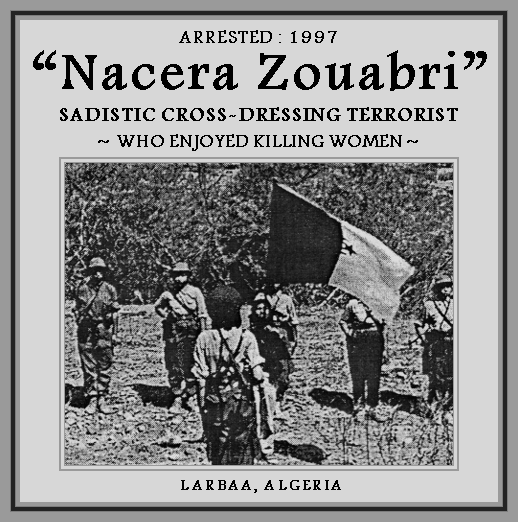 There is confusion over the true identity of the terrorist known as “Nacera Zouabri,” who has been described as sister of the leader of the Groupe Islamique Armé (GIA: Armed Islamic Group), Antar Zouabri, who was killed in 1997. In an interview with a confirmed sister of Antar Zouabri named Khalida reported that the Nacera in question “was a girl from Baraki who had no connection with us.” Official records confirm that there was no one named Nacera in the family of Antar Zouabri. An academic publication from 2014 gives the name as “Nacera ‘Khadidja’ Zouabri.”

EXCERPT: The sister who wasn’t – But Messaouda was not the sister who got the most media coverage. In 1997, following the massacres of Rais and Bentalha the television exhibited « Nacera Zouabri, throat cutter by trade ». Her cruelty was said to be legendary: her brother decapitated his victims or slit their throats and she was said to strip the bodies of their valuables.

There is hardly an Algerian who does not remember Nacera’s terrible deeds and her lack of remorse before the cameras.

Yet there is no record of a Nacera in the Zouabri family. Says Khalida: "She was a girl from Baraki who had no connection with us. They must have tortured her so badly that she admitted everything. I know how they torture. My mother and I have been through it."

FULL TEXT (Translated from Italian): Nacera Zouabri was an Algerian terrorist who, in the 1990s, killed an unknown number of women by shooting them with an automatic pistol. Over time she surrounded himself with some complicit women and began to torture and tear his victims to pieces. In an interview she gave, she said that she was instinctively more inclined to slaughter women and that "she liked to dress up as a man".

Her brother Antar, who made her a terrorist, was the head of the GIA (Armed Islamic Group), a cell made up of terrorists, criminals of various kinds and murderers who committed violence in the name of religion. Sometimes Nacera took part in acts of looting: he robbed the corpses of the victims killed by his brother through beheading or slitting of the throat. Zouabri was arrested in 1997.

EXCERPT: In a recent televised confession, a woman named Zohra Ould Hamrane claimed she was forced to accompany the killers to steal the jewels of the women they massacred at Bentalha.

Another woman, Nacera Zouabri, the sister of the GIA leader, Antar Zouabri, has also been captured. She allegedly made bets with male killers on the sex of unborn infants, then slit the bellies of their mothers. The Algerian public became so obsessed with the story of Nacera Zouabri that a general warned them not to "turn a cockroach into the Algerian Diana".

EXCERPT: Unlike the "Matin" of the day before, "El Watan" [Algiers], of Oct. 9 asserts that Antar Zouabri was dead and was shot during an army ambush in July, in the Blida region. His sister Nacéra, whom the daily describes as "the bloodiest woman in the history of terrorism", was reportedly captured in early October in Larba. She would have joined the GIA of her brother in 1995, and would have been placed by this one at the head of a unit of women which would have been notably guilty of a particularly horrible massacre in Larba. After the death of her brother, she allegedly claimed to succeed him. [“Chronique des groupes armés, 1996,” Perso.ch]

Wikipedia: The Rais massacre, of August 29, 1997, was one of Algeria's bloodiest massacres of the 1990s. It took place at the village of Rais, near Sidi Moussa and south of Algiers. The initial official death toll was 98 people killed and 120 wounded; CNN said that hospital workers and witnesses gave a toll of at least 200, and up to 400. The figure given by the Algerian government to the UN Commission on Human Rights (E/CN.4/2000/3/Add.1) was 238. The BBC later quoted the figure of 800 killed.

In 1997, Algeria was at the peak of a brutal civil conflict that had begun after the military's cancellation of 1992 elections set to be won by the Islamic Salvation Front (FIS). The poor farming village of Rais had mostly voted for FIS and had a history of supporting Islamist guerrillas in the region, but (according to a villager quoted by PBS) had recently stopped providing them with food and money.

The hooded attackers arrived about 1 am in trucks and cars, armed with shotguns, knives, axes, and bombs. They continued killing the village's men, women, children, and even animals until dawn (about 6 am), cutting throats and taking the time to burn corpses; young women, however, were abducted instead of being killed. In some cases, they left severed heads on doorsteps. They mutilated and stole from the dead, and committed atrocities against pregnant women. They burned and bombed some houses. The villagers tried to flee or hide. Army units stayed outside the village, shooting at fleeing villagers, but not attempting to enter the village until after the attackers, carrying away some 20 young women, left at dawn.

Responsibility was claimed for this, as for the Bentalha massacre, by the Armed Islamic Group (GIA). In An Inquiry into the Algerian Massacres (a book arguing that the GIA had become a tool of the state) two survivors are quoted as reporting that the killers were dressed like "Afghans", with turbans, covered faces, beards (some false), and uniforms, that the attackers were also cursing God throughout, and that among them were a few women, wearing hijab over a uniform. These accounts (which can be read below) appear not to be corroborated by major media outlets.

Rais massacre: "Some were shot, some had their throats cut, the heads of babies were severed. A group of extremists who claimed to be motivated by Islam carried out the killings." [Jeremy Bowen, Violent past haunts Algeria's fresh start, BBC News, Oct. 1, 2005]