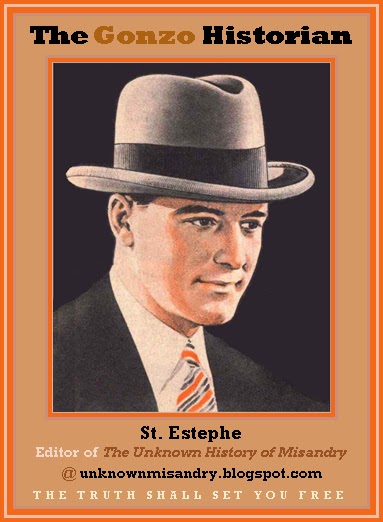 Gonzo Historian (definition) – The term “Gonzo Historian” is painfully ironic, and deliberately so. “Gonzo journalism” is characterized as tending “to favor style over fact to achieve accuracy.” Yet history – especially “social history” – is largely written by ideologues who distort and bury facts in order to achieve a social engineering agenda. “Gonzo” writing is seen as unorthodox and surprising. Yet, in the 21st century subjectivity, distortion and outright lying in non-fiction writing is the norm. Fraud is the new orthodoxy. Consequently, writing that presents facts, well-documented facts, which contradict the orthodox social history narrative is radical and surprising. Integrity is the new mode of “transgression.” Welcome to the disruptive world of facts, the world of Gonzo History.

►•  “Misandric fixation” is a term invented by The Gonzo Historian to describe the violent delusions of such sociopaths as Valerie Solanas. The inspiration for this neologism came from the discovery of a group of cases of sociopathic man-haters all which predate The Scum Manifesto by many, many decades. (GH: 5/20/12)


►•  Three terms from history are indispensable to present-day MRAs: “The Alimony Racket,” “The Badger Game,” “The Heart Balm Racket.” Learn their meaning and use them – mentioning their historical context – in your conversations and writing on current events, and use them frequently. (GH: 5/20/12)

►•  Gynomendacity is the technique used by authoritarian feminists to prevent others from learning the facts of history. This method is derived from cultural Marxism. “Critical theory” was developed by the “Frankfurt School” in order to undermine what they saw as a great evil – Western civilization – so they could replace it with a bureaucratic utopia based on their theories. Powerful capitalist foundations, controlled by the wealthiest families in the world, have financed the cultural Marxism project for the reason that social control through oppressive bureaucracy serves their interests. The goal is to re-institutionalize serfdom. Female supremacists are financially rewarded for imposing the brainwashing falsehoods of gynomendacity. (GH: 5/20/12)

►•   The Gonzo Historian would rather piss on the grave of Karl Marx or Leon Trotsky (the alias of Ukranian psychopath Lev Davidovich Bronshtein) than on the grave of Andrea Dworkin. Institutional gynomendacity, as evil as it is, is only a recently invented tool derived from varieties of utopian control-freakism that were invented by men. (GH: 5/20/12)

►•   If you want to become a well-rounded MRA (Men’s Rights Activist), then you must learn about the unknown history of misandry. If you do not know who Sigurd Hoeberth was – and what his historical significance is – then you have not yet begun your true MRA education. (GH: 5/20/12)

►•  The Gonzo Historian warns all MRAs and would-be MRAs to never underestimate the courage and wisdom of heteronormative women of good character. Throughout history decent women have always stood up for men’s rights. See the posts on UHoM classified under the label Female Anti-Misandrists. (GH: 5/20/12)


►•  If Louisa Strittmater, an obscure New Jersey woman suffering from a severe case misandric fixation who died in 1946, had been 75 years later, instead of dying in the shadows, she would have become a celebrated millionaire Marxist Ivy League professor with a golden pulpit with which to promote her genocidal misandric theories. (GH: 5/20/12)


►•  Most NGOs (non governmental organizations) and most “non-profits” are either profitable scams or profitable fronts for giant financial interests who are in the process of enslaving the world’s population. Cultural Marxists are dupes who love these bureaucracies because it gives them the financial security that allows them to impose their control-freak personalities on others, all the while showed by Orwellian euphemisms to hide their authoritarian aims (helping, social justice, equality, empowerment, wellness, health care). The Gonzo Historian recommends taking a look at the story of a Yugoslavian charity from the 1920s called “The Lucretia Club,” for a prime example of the sort historical censorship that has been promulgated by the today’s gynomendacious universities. (GH: 5/20/12) 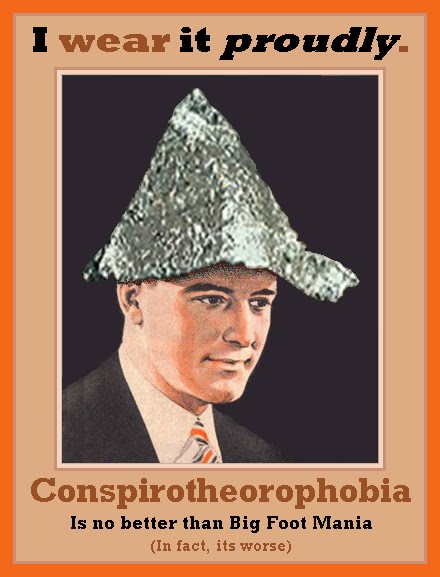 My response written to a superb article:

Re: the idea that “Krista Milburn poses no threat for men whatsoever.” —— In the USA there is a popular meme, cliche, talking point, whatever you want to call it. I used to repeat the set-phrase/formula to which I refer myself, long before I ever studied history (with a primary documents approach). The formulaic talking point is a vulgarism of Occam’s razor which hold that any examination, consideration of a problem that might imply intentionality which might involve more than one person ought to be immediately dismissed — without examining the evidence — in favor of an explanation that bad things in social contexts most likely must occur due strictly to human/social entropy (“stupidity”). Thus any discussion that asks one to consider intentionality (utopian schemes that are attempted in a practical sense, think-tank designed social engineering schemes, criminal intent, behind-the-scenes power-grabs, for example) is dismissed out of hand: presto, like magic!. It is now standard (pressed by an increasingly conformist discourse in elementary schools and corporate media) to cut off debates, discussions and display of information that might indicate such intentionality by evoking the magic words “conspiracy theory.” —- Ahhhhhhhhhh! TIN FOIL HAT!!!!!!!!! Cooties!

Most Americans, a people with not much national history (comparatively speaking) typically do not know much history, and worse, do not know how to sift through historical information and interpret it in a nuanced manner, are quite literally hypnotized by these scary magic words (“conspiracy theory”). Like the three monkeys, the trained response is: see no intentionality, hear no intentionality and speak no intentionality, or else one will be either socially ostracized or, worse, might end up tempted to engage in extensive time-consuming study of factual evidence.

One good thing about this superstition (“conspirotheorophobia”) — which holds that complex examination of facts with the suggestion of groups with intention to cause social change might be busy behind the scenes or right in front of your damned face, for that matter — is that is saves labor, scads of labor. There is no need to read extensively, struggle with difficult to resolve questions, ambiguities and twisted tendentious rhetoric that is found in documents to be studied.

Lucian’s non-American, historically informed, probing, non-superstitious (not afraid of being called the bad name (“CT”), approach is very welcome to this reader. 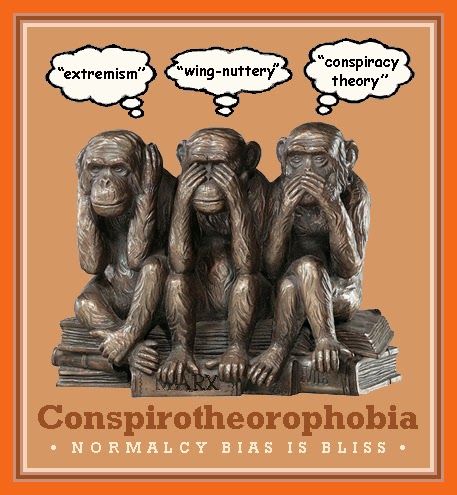 The study of the influence of ideology and ideology-driven political groups, and ideology-driven bureaucratic groups who sought positions in order to implement ideological aims is thought by far to many people — or perhaps, not really thought by, but feared by — to be what they picture simplistically as a “conspiracy theory.”

Here is a cogent little observation that shows that the study of policy documents and agendas published by international organizations is mis-characterized by those who confuse colorful tabloid big-foot myths with documented, well-researched, real-life long-range planning strategies and implementations by ideologues and social engineers and utopians. xxx“Linguist and public scholar Noam Chomsky contrasts conspiracy theory as more or less the opposite of institutional analysis, which focuses mostly on the public, long-term behavior of publicly known institutions, as recorded in, for example, scholarly documents or mainstream media reports, rather than secretive coalitions of individuals.”

“Institutional analysis” is a crucial part of understanding and resisting authoritarianism. And there is no governing system any more authoritarian than feminist governance (based on multiple and discredited ideological sources, marxism, in many of its variants, prominently included), which pushes further and further in its attempt to control every part of every individual’s existence.

PS: Also, here is a quote from the co-author of the Misandry studies book series: “Katherine K. Young: “The fact remains, however, that not all conspiracies are imagined by paranoids. Historians show that every real conspiracy has had at least four characteristic features: groups, not isolated individuals; illegal or sinister aims, not ones that would benefit society as a whole; orchestrated acts, not a series of spontaneous and haphazard ones; and secret planning, not public discussion”. Above all else a real conspiracy is evidenced by provable facts.”

With regard to the popular "stupidity theory" of world events that we hear cited so frequently, I ask:

Does anybody really think Henry Kissinger is stupid?

Does anybody really think that Henry Kissinger has not engaged in multiple behind-closed-doors conspiracies that have led to deliberately harmful results on an enormous scale to an enormous number  of people? 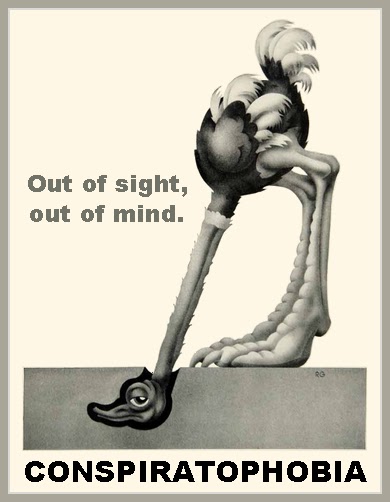 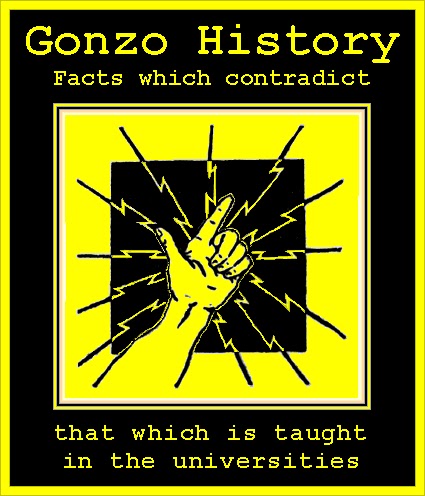 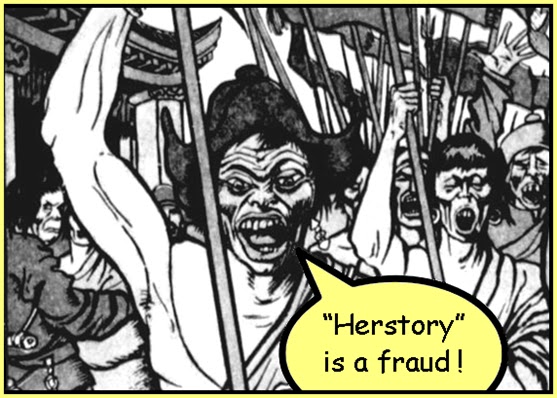 The source for this image is: MEN ON STRIKE – Early Men’s Rights Organization: Tibet 1928

Do not miss it. You will be amazed at what is in this post.