The Fiamengo File: A Return of True Liberal Education 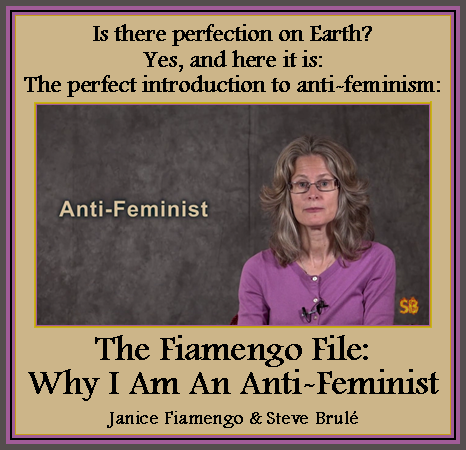 When I first learned of The Fiamengo File I had high hopes indeed. Then the first episode was issued. My hopes were surpassed. This is a truly great educational series of videos.

The Fiamengo File is the cutting edge of inquiry and exposure of authoritarianism and systematic academic fraud in The USA and Canada.

Professor Janice Fiamengo is, in my view, a stellar example of integrity personified.

In her courage and intellectual clarity serves as a role model for ever girl or boy who would strive to live a life of good character and creative bravery.

Following are some nuggets and gems culled from the videos:

►“The dishonesty and hypocrisy of the feminist movement deserve to be denounced every day.” (1:20)

► “It is a paranoid fantasy to pretend that our culture condones rape.” (3:04)

►”It is clear that the feminist agenda is incompatible with the academic ideal of truth and the social ideal of justice for all.” (11:02)

►“It is time people of good conscience took a stand against this corruption of our universities.” (11:40)

► “Feminist hatred is the Siamese twin of feminist victim ideology. Its about the power to silence those who dissent.” (5:16)

► “One of major effects of feminism has been to create a false narrative of history.” (0:17)

► “Feminists have rewritten history and we’ve bought the story.” (4:53)

► “Its time to get real about history and to stop justifying feminism’s exclusionary ideology.” (5:24)

► “This is the genius of feminism, that it took an already existing concern for women and exploited it to women’s advantage, all the while pretending feminism opposed everything traditional society meant for women.” (4:44)

► “The buzz phrase on university campuses used to shame and exclude heretics is ‘safe space.’” (0:28)

► “The fight over safe space isn’t really about safety at all but about power. The so-called marginalized are a bold and belligerent lot who have been spectacularly successful in terrorizing their opposition at no cost to themselves.” (2:46)

► “They are following a time-honored script, written by that guru of the Frankfurt School, Herbert Marcuse, whose essay 'Repressive Tolerance,' should be required reading for anyone attempting to understand campus politics today.” (3:42)

► “That Puritan longing to burn heretics has always been most evident in the young.” (6:07)

► “Herein lies the real source of our malaise: the widespread collapse of the commitment to the disinterested pursuit of knowledge.” (7:40)

► “How did we become a society in which a disciplinary tribunal is convened whenever a woman says she feels creepy?” (6:40)

► “That’s what the feminist regime wants to put in place for men, the feminist panopticon, an awareness by men that doing pretty much anything a woman doesn’t like can get them into serious life-altering trouble. Such a situation is bound to make men feel  wary, uncomfortable, uncertain, fearful, even paranoid, ad that is precisely how feminists want them to feel.” (11:06)

► “The feminist gaze sees the world through grotesquely distorted lens, and the more we allow it to determine law or policies the more repressive the impact will be.” (11:33)

► “When men, rather than women, are victims of violence, their gender isn’t news. And the only time femaleness is not news is when the woman is the perpetrator of violence.” (5:34)

► “It [feminism] makes you lie – to yourself and others.”

► “We do young women no favors in encouraging them to take no care for their own well-being and then to betray others and themselves with self-justifying lies and fabricated innocence.” (11:33)

► “The case of ‘Masculinity Studies,’as it currently exists, disproves the hope that  that so-called ‘moderate feminism’ is salvageable and can be made to accommodate men’s issues. The fact is that when you start with false premises – ‘women’s oppression under patriarchy,’ ‘gender as a social construct’ – you end up with a bad theory …” (0:48)


► “It seems that no matter how men express their heterosexual maleness there’s a feminist influence campaign to tell them its wrong.” (1:00)

► “It is a strange way to go about encouraging male tenderness to insist on their insensitivity and thugishness.” (2:51)

► “Frankly, I find these campaigns more than just annoying, irritating or just silly. They’re evidence of a deep cultural sickness, in my opinion. (8:12)

► “I myself am dumbfounded by the increasing inhumanity of feminist claims and by the seemingly widespread public acquiescence to them.” (13:00)

► “With no standard of comparison because most women don’t know, or don’t care to know, the experience of men many women perceieve any form of unpleasantness in their woirk lives as gender bias, whether its a critical boss – or a poor performance review. And this is understandable; most people given the chance will prefer to believe themselves unfairly treated rather than to admit inadequacy. Add to that the feminist world view that male prejudice is the the sea in which women are forced to swim and you’ve got a lot of women pumped up about injustice and keen for government to make more laws to combat it” (1:38)


► “Women in the military … Its one of the public conversations in which the flagrant hypocracy of mainstream feminist orthodoxy is starkly revealed.” (1:35)

► “The fact that ability isn’t the first thing everybody mentions when discussing women in the military forces demonstrates how deeply the rot of feminist egalitarianism has eaten into the fabric of our society. I, for one, do not want to live in an egalitarian society. I want to live in a merit-based society. I want exceptional women to succeed, to contribute their gifts. But I do not want a fake equality established by government dictate; and I’m tired of hearing from women and their feminist allies about how we have to do more to make sure women succeed. Men have always paid the bigger price and have contributed more as a class than women.  And in the tolerant, humane society we created in the West, men often allowed women to forget that fact. It is appropriate and just for women to remember it.” (8:38)


►”This ignorant animus against men starts in the public schools and spreads through higher education, the entertainment industry, the justice system and the mass media, widely colluded in by both men and women. I sometimes think we’re in the grip of a mass cultural neurosis, so binding and severe that only the complete destruction of our civilization will wake us to its dimensions. There could be no more certain way to guarantee our doom than, as that jackass Jack Stafford advocates, to, quote: ‘do away with manhood.’ On the contrary, we’d better start recognizing – and applauding it.” (12:02)


► “Those wishing to understand the theoretical source of the present outbreak may wish to conselt a book by Brazilian Paulo Friere, titled Pedagogy of the Oppressed, which was first published in Portuguese in 1968 and translated into English in 1970. Widely studied in teacher training programs in North America the book initiated what is has come to be called critical pedagogy, and has had an enormous malign influence on schools and universities across the West. (7:21)

►”What appear to be time-wasting antics that distract from learning, what appear to be counterproductive acts of insubordination and thuggishness on the part of students, misguided and willfuly distorting declarations by student leaders, and craven gestures of conciliation and anti-intellectual complicity on the part of teachers and administrators, all make sense in Freirian terms, as necessary resistance. What we are witnessing on university campuses across North America is not by accident, or incidentally about the rejection of reason and the rejection of the Western intellectual inheritance. Its central object is to destroy the past, and remake the present through the practice of the raised fist. Ceaseless disruption, unproveable claims of abuse, whimsical acts of repression, like the cancellation of yoga, grandstanding, incivility, threats, name-calling, persecution, white self-hatred and groupthink: and all of it applauded and catered to by the intellectual elite. Thanks to Paulo Friere, and his many followers, we have front row seats at the collapse of the Western university coming soon to a campus near you.” (9:44)

► “So with this so-called study, based on misleading questions and the manipulation of data, anyone reading it with an open mind would have to conclude that the sexual harassment crisis is pure invention.” (4:30)

► “What we see in these reports is a very disturbing willingness on the part of so-called experts to create a false picture of a supposedly widespread problem and to encourage women to disregard basic commonsense morality in order to launch complaints against their male colleagues even when their conscience tells them that what happened was at least partially their own doing or so trivial as to be not worth bothering about.” (8:48)

► “If I were a young man now I’d get myself a law degree specializing in labor and employment and prepare to take on this anti-sex, anti-human, anti-love Leviathan. Until we’ve got an army of anti-feminist lawyers  fighting in our corner things will only get worse. Its time to take back our offices, classrooms and boardrooms in the name of sanity and common sense. Let’s make the workplace safe for men.” (12:41)


► “What many of us hoped back in the 1980s might be a radical but temporary measure is being made into a permanent, never-to-be-questioned feature of our society. And this is, of course, how utopian movements like feminism always operate. No matter what is done for women, no matter how many special perks and rewards, there will always be some way to claim, it doesn’t have to be a logical way, that more is needed.” (13:19)

►"The money being spent on them -- on programs that miseducate our youth and that contribute to the rot that pervades our justice system, our social services and our media -- that's money that could be far better spent on real academic subjects that do not harm and actually benefit society." (14:32)


► “Reading news stories about our culture of rape, misogyny, objectification and sexual harassment, I often feel that I am crazy, or that some significant portion of society is. Is it possible that feminism is actually a form of mass hysteria?” (0:01)

► “Surely, this is far more than a rational movement that is occasionally taken too far, as some say. Surely, this movement is irrational to its core.” (2:37)


► “According to Justice Zucker have been so oppressed by patriarchy that they cannot actually say what they mean or act with integrity and the law can and should be warped by a judge to accommodate any woman’s story of victimhood.” (10:59) 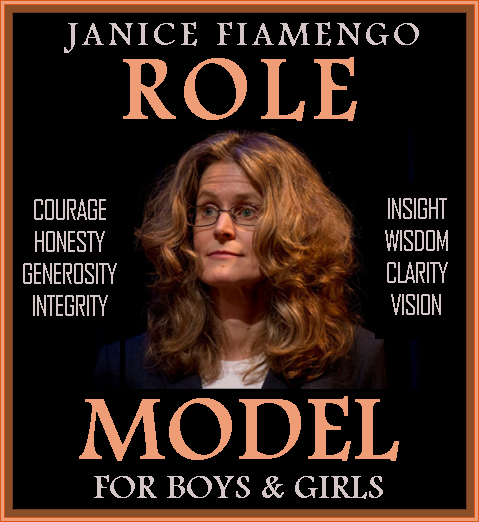 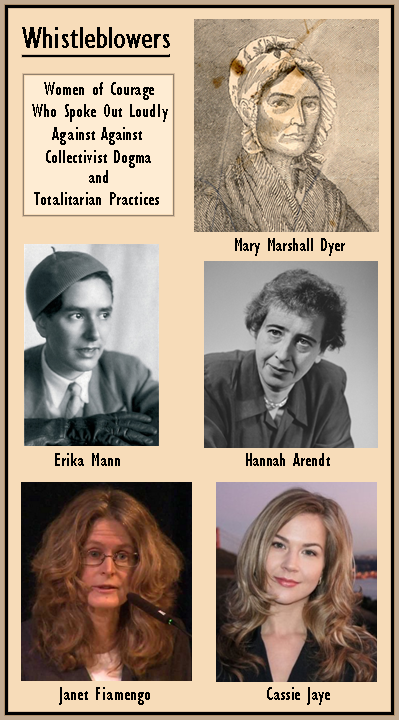