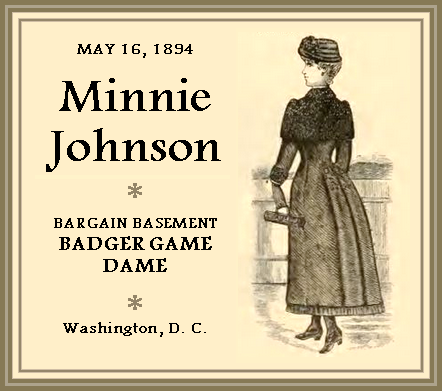 FULL TEXT: Minnie Johnson, a young woman who lives at the home of her mother. No. 239 Canal street, was standing last night at Louisiana avenue and 9th street, when Arthur Phillips, a boy who lives at 1:30 6th street southwest, came along. The woman called him, so he says, and he went home with her. What transpired In her room was told in the Police Court this morning. Phillips reported to the police that he had been badgered to the tune of $4, and Officers Barry and Flathers went to the house and made several arrests. Minnie Johnson and her cousin, Eva Travis, were taken in custody, as were two men, Charles Miller and Robert Lewis.

Miller and an unknown young man were charged to have figured in the badger game, when Eva Travis and Robert Lewis were arrested because they were found in the house.

According to the evidence of Phillips, he went home with the girl, and soon after he entered Minnie's room Miller and the unknown entered. The latter inquired of him what he was doing with his (the unknown's) wife.

"I didn't know she was your wife," said Phillips, who was badly frightened.

Some one said: "Why don't you square it?

"And she took it," said Phillips.

Minnie denied the charge. She said that there was no trouble in the room whatever, and she and Phillips parted friends.

Miller, who says he is an electric light worker, made a statement in his own behalf, denying the charge that he participated in the badger game. His mot her appeared in the case and told the Judge that her son was a good boy. "He isn't as good as you think he is," remarked the judge, who read the young man a severe lecture and released him. Eva Travis, who is a cousin of Minnie's, came here on an excursion from Richmond, and Judge Kimball released her upon a promise to return home. Minnie was sent down for thirty days, and the Lewis boy was discharged.