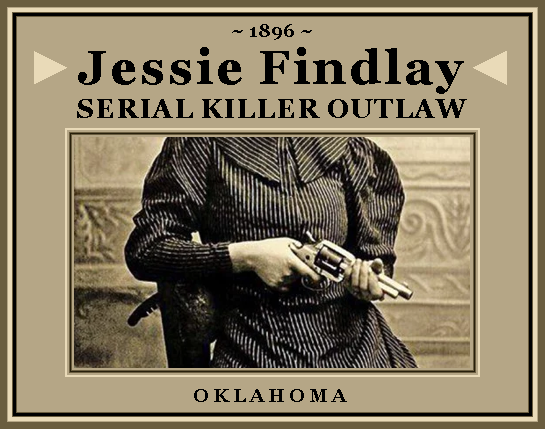 FULL TEXT: Jessie Findlay, the woman outlaw, has been released from the United States jail in $10,000 bail. She has killed four men and been the leader in a dozen hold-ups.

FULL TEXT: Jessie Findlay, the noted woman outlaw was released from the United States jail last week on $10,000 bail. This was probably done on the theory that an Oklahoma outlaw gets justice quicker on the outside of a prison. Bill Doolin had been in jail for months with prospects of many months more delay in his trial and possibly his final escape from the law. He escaped from prison and within six weeks was shot dead. Jessie Findlay has killed four men and been the leader of a half dozen hold-ups. Her next effort may be her last.

FULL TEXT: Jessie Findlay, the female bandit imprisoned at Oklahoma City, has captured the hearts of her captors, if reports are true. Coming as this report does, from the land of the bloody fake and the guilt-stained exaggeration, one is licensed to doubt it but for one thing.

In Oklahoma City, where the charming bandit is temporarily residing at the earnest solicitation of the authorities, lives Mrs. Alberts. Mrs. Alberts edits the Oklahoma City Star and the editorial page thereof is bright with many a turn of fantastic wit, and ponderous with many sagacious editorials.

And it is Mrs. Alberts who gives out the news in regard to the winsome characteristics of the Siren Jessie, who was brought in by the deputy marshals in her bare feet charged with effecting the escape of her lover from the Oklahoma City jail.

Mrs. Alberts says that Jessie not only reads novels and smokes cigarettes, but she goes "to the Saddle Hock restaurant chaperoned by some of the handsome under sheriffs and deputy marshals, and thoroughly enjoys herself. She is supplied with the sweetest dresses, a duck of a hat and everything she wants."

And then Mrs. Alberts, supposedly placing her hand on an editorial charging the government with treason because of the tariff schedule on wool, looks off in the distance, and with a sigh that is born of a dream, adds to the above, "It's a sweet thing to be a girl bandit"

This report of the divine Jessie Is certainly unique. The sight of the fair prisoner doing up her Lair, touching a piece of lace into unspeakable grace about her fair young throat, buttoning her glove around a wrist bursting with plumpness and whiteness, snugging that dainty foot into a boot of infinite fineness, tossing her pretty head coquettishly, and, then tripping lightly off to the Saddle Rock with a half dozen deputy marshals, dazzled into that comatose condition best productive of intense infatuation, following her with loving fear, and gazing on her buxom form with parched throats this is a sight that every citizen of Oklahoma City should look upon now while all the fleeting opportunity is at hand. This for the citizen of Oklahoma.

As regards the sheriff, it is another matter. Caution, discretion and official foresight on ids part should suggest a change of jailors once a week, or even at briefer intervals, guaged to sweet little Jessie's capacity to throw the violet-light of her dancing eyes around the average deputy, ensnare, entangle and trip him completely. 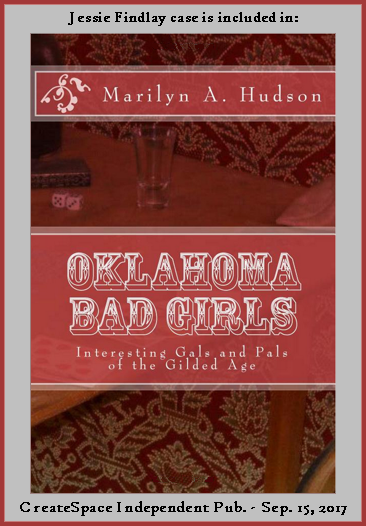