Ruedell Harrison: Claimed to be a Serial Killer – Missouri, 1947 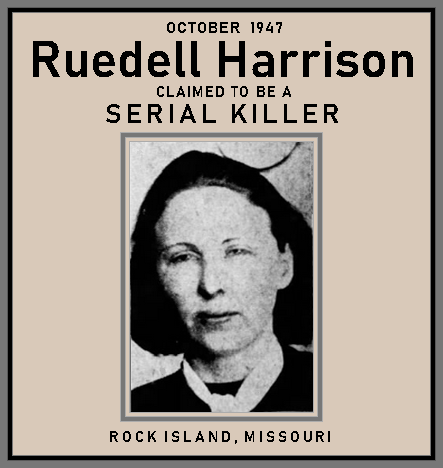 NOTE: Here’s a “who the Hell knows” case. Picked up as suspect in a murder and released, Ruedell Harrison took credit for three separate, but unidentified murders. . . . Who knows ?

FULL TEXT: Rock Island – The photograph of Ruedell, above [full-figure photo], taken yesterday in a St. Louis jail, was being shown today to witnesses who saw a woman with James R. Anderson, 25, of 1700 Twenty-ninth street, Rock Island, early September 28 before Anderson’s body was found lying in the back seat of a taxicab, the victim of knockout drops.

The woman, who is 35, was arrested Tuesday at the Hotel Statler, St. Louis, after she allegedly attempted to rob a traveling salesman after giving him knockout drops.

In a letter addressed to Chief of Police William J. Wilkins of Rock Island. Jeremiah O’Connell, St. Louis police chief, said the woman has stated she has killed three men and expects to kill more. However, the St. Louis official said, she would not elaborate on the slayings or admit the Rock Island murder.

According to the letter from St. Louis, the woman did admit shootings and killer her husband in Dallas, Tex., in March, 1947, and that she now is at liberty on bond on the murder charge. The information received this morning also was sent to the Dallas police department. Chief O’Donnell stated the woman demands extradition papers if she is taken either to Rock Island or Dallas to face murder charges.

The St. Louis officer indicated the woman might have similar physical aspects as the one being sought by Rock Island police for the cab slaying. She gave five different names to the St. Louis police, including Harrison, Murdock, Virginia Heath, Ruth Simmons and R. B. Jackson.

She previously was arrested in St. Louis on charges of attempt to commit murder, burglary, forgery, robbery and carrying concealed weapons.

An inquest into the Anderson death was held this morning in the office of Coroner Leslie H. Banning. The jury, headed by Oscar Carlmark, Moline, found that Anderson died as a result of an overdose of choral hydrate administered by a person or persons unknown. 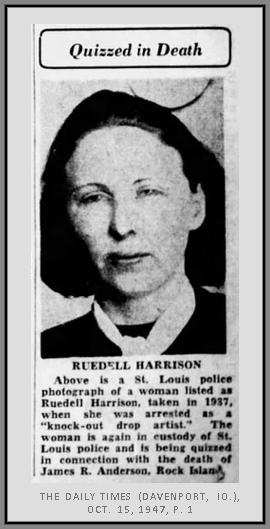 NOTE: An alternate suspect in the same crime:

Seven witnesses brought forward by Rock Island police yesterday afternoon failed  to identify the woman as the companion of Anderson the night his body was found in the rear seat of a taxicab in Rock Island.

After the last witness had failed to place her in the puzzling murder case, Mrs. elder declared:

“Well, I’ve proved myself innocent and can return to my husband.”

Mrs. Elder had maintained her innocence during questioning by Dayton police and later to Rock Island authorities, stating she agreed to come to Rock Island simply to clear himself of charges in the man’s death. She told police here she had proof of purchasing three birthday cards in Dayton September 27, the day before Anderson was slain.

She said she had never been in Rock Island before, but admitted, when first queried by Dayton police, she may have driven through Rock Island on a trip to St. Louis in August. “I often fall asleep when my husband is driving,” she explained.

One other suspect, Ruedell Harrison, St. Louis, had been questioned previously, but when witnesses failed to identify her, she also was released. 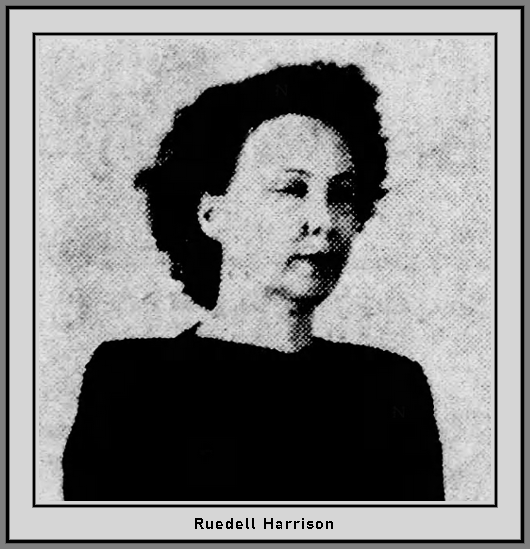