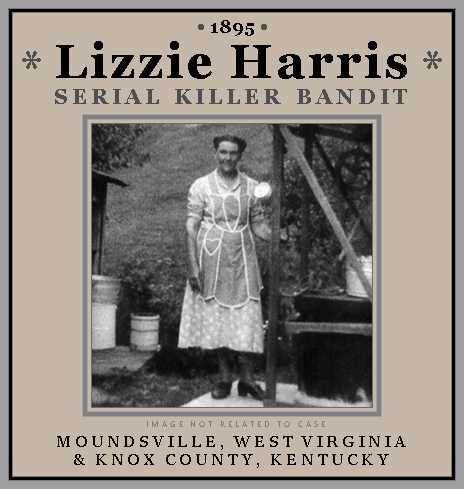 FULL TEXT: Frankfort, Ky., Sept. 21 – A recent arrival in the penitentiary here is Lizzie Harris. She is from Knox county and was brought down by Sheriff Jarvis to do two years’ time for cutting a woman.

In a talk the Harris woman said she had spent three years in the Moundsville, W. Va., penitentiary. She admitted she had killed four men, three in one night. The fourth was her sweetheart, who kissed another girl. An attorney named Black cleared her. She was in Moundsville for arson.

Her husband deserted her and she cut the sister of the woman he went with for revenge. She says she likes it here and has met several very nice men.

FULL TEXT: Sheriff Jarvis, of Knox county, passed through the city late yesterday afternoon having In charge five or six prisoners on the way to Frankfort. The prisoners were placed in the watch house until the six o'clock train left. "

Among the prisoners was a young woman from Knox county, apparently about 25 years old, and a typical Eastern Kentucky mountain girl. Her hair Vos cut short and hex dress was of calico, made in mountain style. She was going to Frankfort for housebreaking. She was placed in a cell by herself at the station house.

She was quite talkative, and when asked her age and home said: “I am jus’ 34 and live in Knox county. My name is Lizzie Harris. Used to live in Wes' Virginny, but got in trouble and left there. Ise going to Frankfort now for a couple of years, but I don't care."

"Did you ever kill a man?" was asked.

"Yes, Lord, killed four. I waylaid the highway 0110 night in Wes'  Virginny and propped three men. I stayed in the pen in that state three years. I shot my sweetheart, too, and killed him, but a lawyer named Black pleaded me out of it."

"Did you ever commit any other crime?"

"Guess I have. Broke into one or two houses, but have had luck and got out. I think I will have a nice time at Frankfort. Some nice men there, I hear. My husband left me some time ago, and I am grieving over it.”