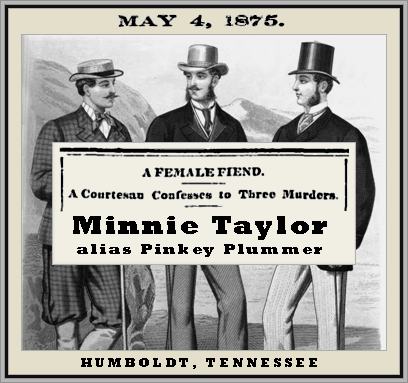 FULL TEXT: On the 9th day of February, 1874, L. R. Lane, a citizen of this county, living at Woodruff station, on the L., P. & S. W. Railroad, left his home and went to Paducah with a considerable sum of money about his clothes. He was seen in a house of ill-fame in that city about 11 o’clock at night, and was never seen again. This item was published in the Times of February 25, and fears were then expressed by us that he had met a tragic end. Now comes the information that clears up the mystery concerning his sudden disappearance and untimely tragic death. From the Paducah News we learn that Minnie Taylor, a notorious courtesan of that place, better known to our people as Pinkey Plummer, was recently tried and convicted before the Circuit Court at Humboldt, Tenn., for killing her paramour, and sentenced to the Tennessee Penitentiary for life. After her incarceration in Jail, finding her case a hopeless one, she confessed to the killing of three men, one of them being Lane. He visited her house as before stated, and they went out riding. She says she killed him and threw him in a river. Lane was a man of family. He married into a respectable family of the country. He came from Missouri to this State.

FULL TEXT: A desperate woman – is Minnie Taylor alias Pinkey Plummer, well-known both here and in Clarksville, near which latter place, at Dunbar’s Cave, a favorite summer resort, was a large pic-cic on Wednesday week last, and just as the party had ended the pleasure of the day preparatory to returning to the city, Minnie Taylor made her appearance. Some of the gentlemen told her to go away, as one of her character would not be allowed in the presence of respectable persons. At this she be came highly incensed, and, drawing a pistol, fired several times at one of the gentlemen, a bullet grazing his neck, but inflicting no serious wound. The gentlemen then pounced upon her and whipped her very badly, after which, not content with her preliminary revenge, she left for home, but halting at a doggery in the suburbs of the city, she halted a gentleman, who, refusing to “come in and drink,” was also fired at, but fortunately missed. She was forthwith arrested, and being held in $500 in each case, was kept from jail by a gentleman, who went on her bond. Considerable excitement was created, and the citizens demand that the city be freed from such desperate and infamous characters; and well may they ask the suppression of such crime, which so has preyed upon the vital and moral interests of society. If the law is not sufficient, then other means must be resorted to. Even murder is connected with those of this unfortunate class in Clarksville.

About eight or nine weeks ago, a gentleman with several hundred dollars on his person stopped in Clarksville on his way to Missouri. He deposited his valise in a saloon and then went out to one of the dens of infamy, since which time nothing has been seen or heard of him. On the porch of the house several bills were discovered early in the morning by a policeman, whose suspicions, as to foul play, had been aroused, several of the women and the proprietor, whose name is Wm. Rhen, of the house the missing man lodged at, left on the first train and have not returned. Diligent, yet futile search has been made for the missing man by the police officers, who say that he has been robbed and murdered. The Attorney-General has used every effort to get some clue to the mystery but has not succeeded.