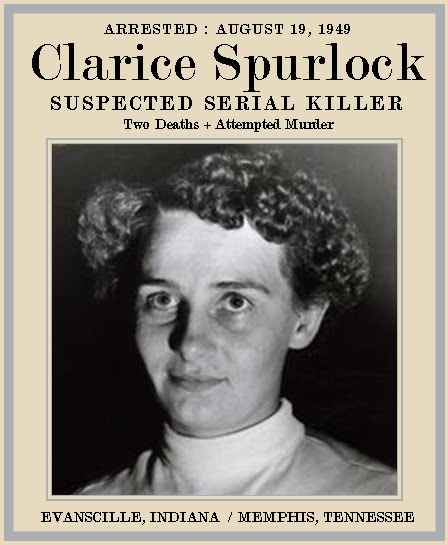 FULL TEXT (Article 1 of 4): Mrs. Arleigh Spurlock, 30, of Evansville was arrested last night at Memphis, Tenn., and is being returned to Evansville to face a first-degree murder charge in connection with the death of her mother, Mrs. Winter Dearing of Huntingburg. Her husband was with her in Memphis at the time.

An affidavit was issued at Evansville late yesterday charging that Mrs. Spurlock, the former Clarice Bearing of Huntingburg, administered lethal doses of arsenic to her 56-year old mother. Mrs. Dearing died last November 16 at the Welborn Memorial Hospital in Evansville after a brief illness at the home of her daughter in Evansville. Mr. Dearing died five months later, on April 5, at the Deaconess Hospital. Like Mrs. Dearing, he had also become ill while staying at his daughter’s home.

Police became suspicious due to the unusual circumstances of the two deaths, and started an investigation piled up with evidence that led Vandenburgh County Sheriff Frank McDonald yesterday to seek a murder warrant against Mrs. Spurlock.

Sheriff McDonald some time ago obtained an order for the exhumation of Mrs. Dearing’s body. Disinterment took place on August 3 at Huntingburg’s Fairmount cemetery, where both Mrs. Dearing and her husband were buried. The Vanderburgh county sheriff, State Police and an Evansville pathologist were present when the body was taken to the Finke Funeral Home in Huntingburg for examination. Later the body was re-buried in Fairmount cemetery.

Dr. Farney stated that he believes a fatal concentration of arsenic was administered to Mrs. Dearing within approximately ten days prior to her death, and that probably a second dose was given shortly before her death.

According to the Evansville police, Mrs. Dearing went to Evansville last September after her daughter had asked her to come to her home and help take care of her husband, Arleigh Spurlock. Dr. R. J. Rossow, who practiced medicine in Huntingburg before going to Evansville, was the attending physician. He has reported that Arleigh Spurlock complained of a numbness in his legs, and frequently vomited. Dr. Rossow was called to see Mrs. Dearing on November 8 after she complained of dizziness and nausea. During a call on November 10, he told Sheriff McDonald, he noted tenderness in the area of the gall bladder and Mrs. Dearing seemed to be suffering from gastritis. The doctor recommended that she be removed to a hospital. He called again on November 13 and asked that she be taken to a hospital. He called again on Nov. 15 and found Mrs. Dearing in such a serious condition that he threatened to quit the case unless the patient was hospitalized.

She was admitted to the hospital at noon on Nov. 16 and died at 4 o’clock that afternoon. She appeared to have suffered facial paralysis just prior to her death, hospital physicians said.

Cpl. Don Smiley of the State Police, who is assigned to the Jasper post, interviewed Dr. Rossow at great length on Mrs. Dearing’s death. Dr. Rossow told the officer he considered the death “most peculiar” and insisted upon an autopsy, but this was refused by Mrs. Spurlock. The doctor then signed the death certificate giving the cause of death as agranulocyto­sis leucopenia but admitted he was not positive beyond the question of a doubt.

Mr. Dearing came to the Spurlock home last February and a few days later, on February 17, he also became ill. Dr. Rossow was called to the Spurlock home on Feb. 17 and found Mr. Dearing with much the same symptoms that Mrs. Dearing complained of prior to her death which occurred less than two months later, on April 5. He failed to respond to the treatment and was admitted to the Deaconess Hospital on Feb 22.

Sheriff McDonald said he learned that five days before his death, Mr. Dearing made a will in which he left his entire estate to his daughter, Mrs. Clarice Spurlock. The will was witnessed by Dr. Rossow and Dolph Vandeveer. Mrs. Spurlock was made executrix of the estate with authority to dispose of the property as she saw fit. The value of of the estate is indicated at about $20,000, Sheriff McDonald said.

The will does not mention the dead couple’s son and only other child, Bernard Seaton Dearing, 31. He is now serving a two-to-fourteen year sentence in the Indiana State Prison for forgery. He was arrested in Huntingburg shortly after his father’s funeral and was convicted in the Dubois circuit court at Jasper. His wife and two small children live at Princeton.

Several peculiar incidents in which Mrs. Spurlock was involved set off investigations in Huntingburg. The garage at the Dearing house was burned on May 8, shortly after Mrs. Spurlock had been seen there by neighbors. This precipitated an investigation by State Police and the state fire marshall’s office.

Less than a week later, on May 13, another strange incident attracted police attention to the Dearing home. At 8 o’clock that evening, a next-door neighbor, William Kaetzel, received a phone call from Arleigh Spurlock in Evansville. Mr. Spurlock said his wife had gone to the Dearing home in Huntingburg that day and he was worried because she had not returned.

Mr. Kaetzel found the Spurlock auto in the driveway of the Dearing home, which was dark. He then phoned Chief of Police Gus Mayo. The police chief flashed a light through a window and found Mrs. Spurlock to be unconscious. He then called Dr. Fielding Williams, who ordered her removed to the to the Stork Hospital. The police chief reported that he found two books of matches on the floor. One of Mrs. Spurlock’s slippers was about three feet from the foot on which she had been wearing it. The door of a nearby closet was open, and Mrs. Spurlock was lying in such a manner that her feet were in the closet, the Huntington police chief said. He and Dr. Williams looked through the woman’s purse for dope. They found an empty pill box which Spurlock said later had contained “rest pills.” In the kitchen they also found a glass about half full of water. Mrs. Spurlock was released from the hospital the next day. She said that two men grabbed her after she entered the darkened house and that one of them had jabbed her with a needle.

Mr. and Mrs. Dearing were liked and respected by their fellow citizens in Huntingburg. Mr. Dearing, a native of Nebo, Ky., has been employed since 1920 as a railroader and was a jovial and pleasant person. He was a big man, nearly six feet tall and weighing close to 200 pounds. He was a deacon and elder in the Christian Church at Huntingburg, and belonged to the Masons, Odd Fellows and Brotherhood of Railroad Trainsmen. 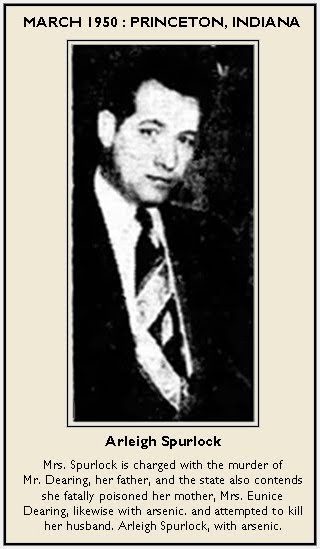 FULL TEXT (Article 2 of 4): EVANSVILLE, Ind. – Investigation of a Huntingburg, Ind., woman's arsenic death spread yesterday to the death of her husband and the illness of her son-in-law.

The sheriff said he will go to Memphis today to bring the attractive 27-year-old Mrs. Spurlock back to face the first degree murder charge filed in Mrs. Dearing's death.

Spurlock was held along with his wife Saturday after they were arrested by Memphis detectives." He was released later.

He told Memphis officers that he and his wife were on their way to Hot Springs, Ark., for a vacation. Their attorney added that Spurlock was to have been treated at Hot Springs for arthritis.

Spurlock is an instructor in an Evansville business college. He and his wife live in a new suburban section at the edge of Evansville. Both are natives of Huntingburg.

McDonald said he began investigating last May after, learning of the strange illnesses that led to the Dearing deaths. He declared Spurlock’s health had been growing worse until the investigation began and he accused Mrs. Spurlock of trying to block his inquiry.

FULL TEXT (Article 3 of 4): PRINCETON, Ind. —  Mrs. Clarice Spurlock was free today of charges she killed her father and mother with poison.

The 28-year-old Evansville housewife was acquitted last night of first degree murder in the death of her father, Winter Dearing of Huntingburg, Ind. A second charge then was dismissed for insufficient evidence on motion of the prosecution.

Mrs. Spurlock remained in custody overnight because of an arson charge against her in Dubois circuit court at Jasper. Her attorneys said they would try to have bond set so she might be released pending trial on that charge.

A 12-man jury deliberated only 35 minutes before returning a verdict yesterday.

Special .prosecutor Owen Williams of Evansville had asked for the death penalty in his closing argument.

The defense contended there Was no evidence Mrs. Spurlock ever possessed, any arsenic, the poison which killed her parents. They asked the jurors not to ''guess" her into the electric chair or life imprisonment and said the case had been built up for political reasons.

Dearing died in an Evansville hospital last spring after visiting his daughter. Mrs. Dearing died  in the fall of 1948 under similar circumstances.

The state presented 48 witnesses while the defense rested without presenting any evidence.

The arson charge involves burning of the Dearing's garage at Huntingburg in 1947. The state tried to bring the arson case into the murder trial but testimony along that line was ruled out.

Dr. A. W. Ratcliffe, pathologist at Deaconess hospital, Evansville, was a witness in the murder trial of Mrs. Clarice Spurlock, 28, of Evansville, in Gibson circuit court.

Mrs. Spurlock is charged with the murder of Mr. Dearing, her father, and the state also contends she fatally poisoned her mother, Mrs. Eunice Dearing, likewise with arsenic, and attempted to kill her husband, Arleigh Spurlock, with arsenic.

Dr. Ratcliffe participated in the examination of organs of Mr. Dearing after his body was exhumed from a cemetery at Huntingburg.

The witness said the internal organs ot the victim showed degeneration of tissues from a toxic similar to arsenic.

“The brain of Mr. Dearing showed traces of heavy metal poisoning similar to lead or arsenic.”

"The brain of Mr. Dearing showed traces of heavy metal poisoning similar to lead or arsenic.” James E. Lopp, of Evansville, defense attorney, slashed vigorously at the testimony of the Evansville pathologist and tried in vain to force him to admit that the poison might have entered the body through arsenic formerly used in embalming, from soil at the grave water seepage or from paint on the coffin.

“How could arsenic from any of these sources have entered the internal organs?” 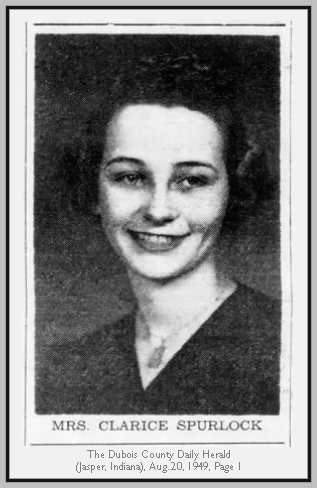 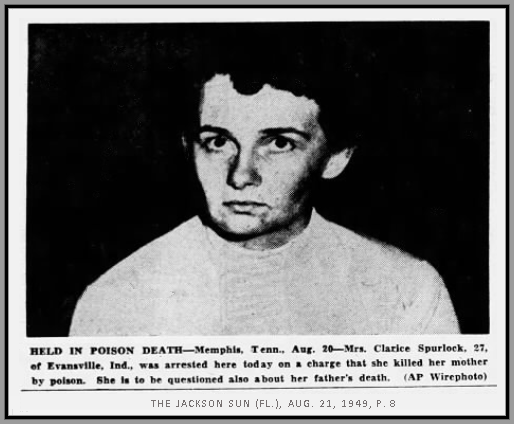 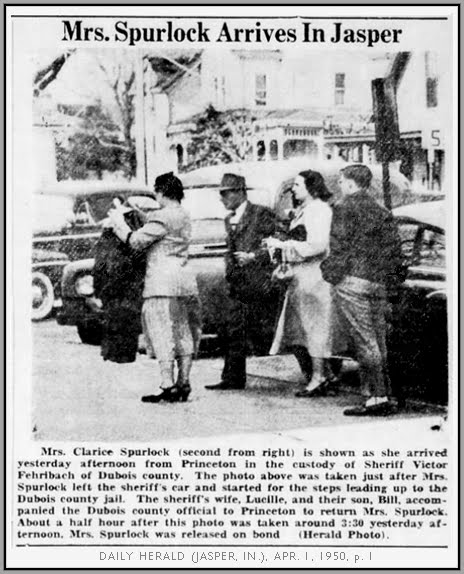 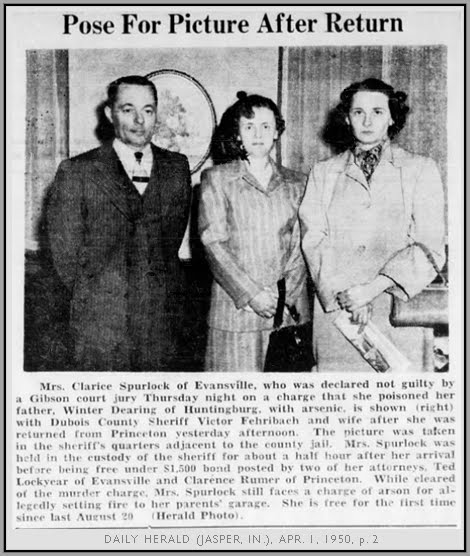 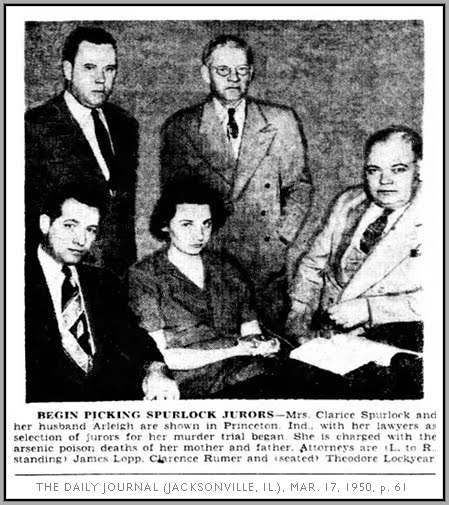 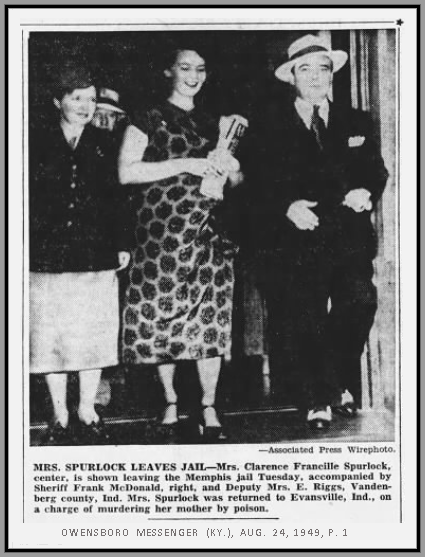 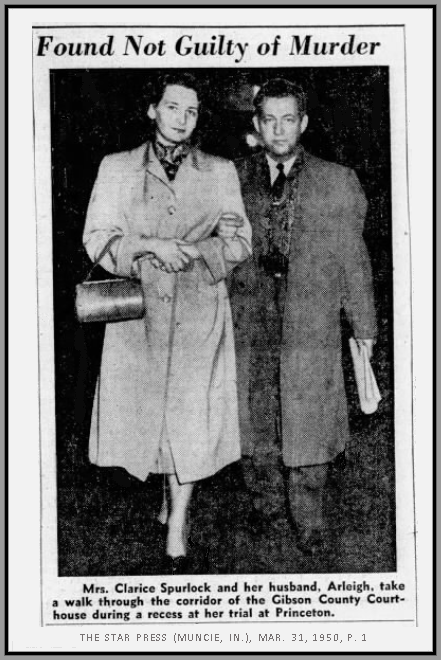 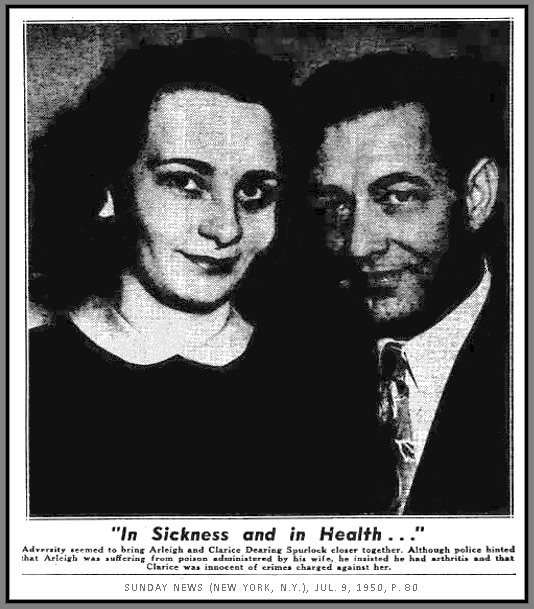 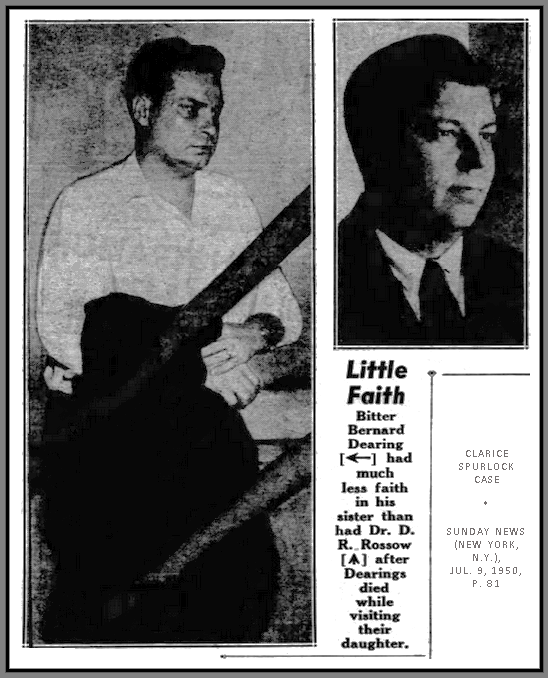 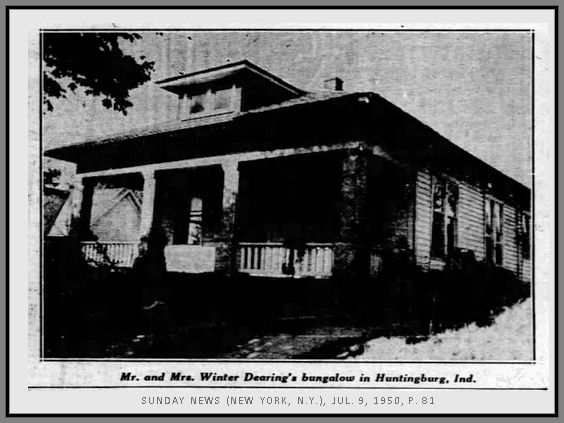 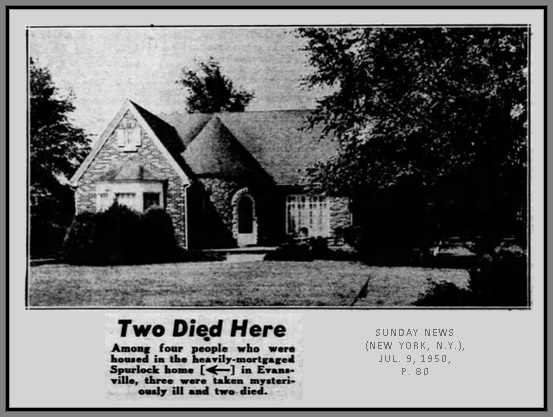 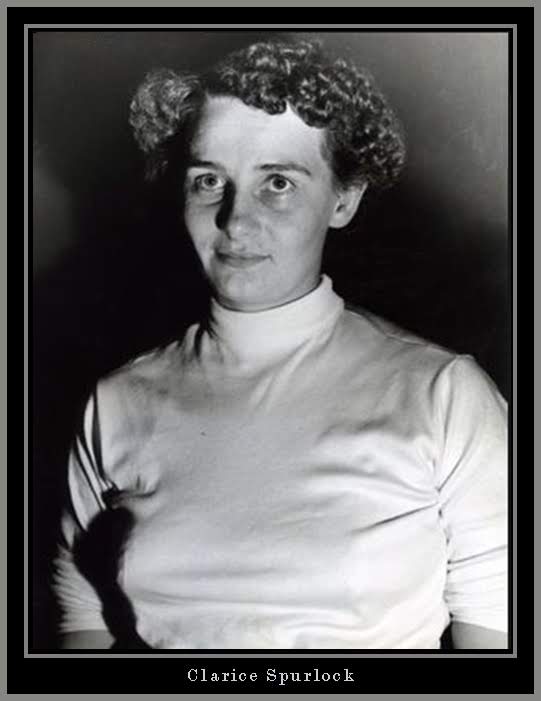