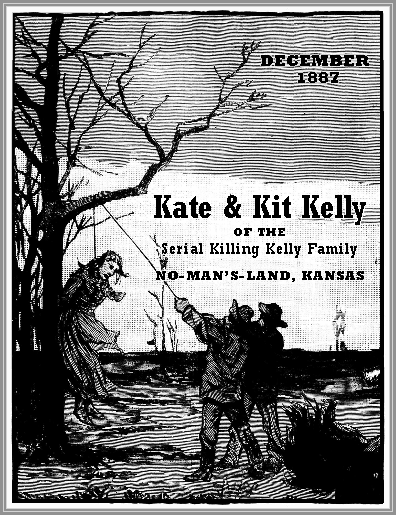 FULL TEXT: Wichita, Kan., Dec. 25 – A man who has arrived her from “No Man’s Land” confirms the reports of wholesale murders by the Kelly family, who have disappeared. The family lived in a one-story hut, with a barn a short distance away. An investigation showed that the house had a cellar, and in this was the decomposed body of a man. This body lay almost beneath a trap which had been built in the floor. In one corner of the cellar were found two other bodies, both so far decomposed as to be unrecognizable.

Beside these Mr. Gregg says four bodies were found buried beneath the stable, one of which was that of a woman. Lying alongside of the barn, buried at a depth of not over three feet, was unearthed the remains of a man. Almost two feet away was a second body. At the corner of the barn was buried the bodies of the bodies of a third man and woman.

The bodies were taken from their resting place and given burial. Nothing has been heard of the Kellys since they moved. There was a feeling. however, that with their ill-gotten gains they have gone to old Mexico.

[“Eleven Bodies Found. Work of the Kelly Family in Rivalry of the Benders – What Was Found at Their Deserted Homestead.”]


FULL TEXT: A special from Fort Elliott, Tex, Jan 2, says: The last act in one of the bloodiest of tragedies has closed, and the Kelly family have quickly met the vengeance they deserved. Two or three weeks ago the whole country was startled by a report of wholesale butchery and robbery near Oak City, in “No Mans Land Land,” said to have been committed by the Kelly family who lived in a dwelling frequented by travellers. The visitors at Kelly halfway house were cattlemen, drummers and other men who had money and it was this fact that led to the murders.

About the middle of December Kelly’s house was shut up, and no one could tell what had become of the inmates. Soon came inquiry from a Chicago firm for a missing drummer and he was traced to the Kelly house but no farther. A search of the premises led to the discovery of his body in the cellar. There were also five other bodies there, and four bodies were found buried beneath the stable, one of which was that of a woman about 50 years of age.

In the woodshed was found a blunt ax upon which were plainly visible particles of flesh and human hair.

When information of the ghastly find was brought to Beaver City. It was recollected that the Kelly family consisting of the old man William, aged 55 years; Bill, a son of 20; Kate, the old man’s wife, and “Kit,” the 18-year-old daughter, had a few days before passed through town en route as they said to New Mexico. They were driving a span of horses and leading four others and seemed to have plenty of money.

A posse of twenty citizens at once started in pursuit. The trail led along the north bank of Palo Duro Creek. It was found that the family had changed their course south toward Wheeler, Texas. About noon on Thursday they were seen far ahead. They at once left the wagon and mounted the horses which they had been leading. For two hours there was a hot chase and then the horse ridden by Mrs. Kelly stumbled and fell. No stop was made on account of this incident and about a half hour later the vigilante were near enough to the son and daughter to shoot. A cry of halt brought them to a stop but the old man who rode a better animal kept on his way.

Upon coming up with Bill and Kit, the girl began at once begging for mercy saying she “never killed anybody.” Bill said: “ Oh! Shut up; it isn’t any use Kit, you’ve got to go with me. You know you had just as much to do about it as I.” Ropes were speedily procured, and  the two were bound. One of the party climbed a tree and slipped two ropes over one of the outstretched branches at the ends of which two running nooses had been made. The murderers were then placed beneath them and the ropes adjusted about their necks. True hangman style they were told they could pray or make any statement they desired. There was no such thing as repentance in either of them.

“Shall I tell?” half whispered the girl to her brother.

In a moment the two bodies were hanging in mid air. The ropes were tied to an adjoining sapling and the bodies were left hanging while the posse rode on after old man, Kelly who by this time had disappeared from sight. His trail was easily followed as the horse he rode had been shod only in front. After three hours of terrific riding the party came near enough to the old men to order him to halt. This refused to do when a shot was fired the ball spinning past his head. Still he kept on when another shot was fired and the old man stopped his horse in an instant the band surrounded him and dismounted.

The leader of the vigilante told him that he had but a short time to live, and anything be had to say would be heard. The old man commenced talking in almost inaudible voice and made a brief statement about as follows:

“I moved to Kansas from the mountains Pennsylvania in 1869, and lived at different points along the southern border until I decided to move to No Man’s Land settled 25 miles from Beaver City, and went into the cattle business. Soon after I opened a sort of tavern. Several persons disappeared while passing along this trail but as to their death I have nothing to say. A good deal of talk of foul play was made and I determined to move on to south Texas. This is all I have to say.”

A few words were spoken by members of the band aside when preparations were at once made to hang him. In a few minutes his body was swinging in the air. He was then let down and asked to confess his crime. This he did.

He and all the members of his family were equally guilty. He said they had killed and robbed nine men and two women. He told where the money was hidden that had been taken and gave up what he had on his person. He professed not to know where the murdered persons came from. He was again swung up and left to hang. On his person was found a gold watch bearing the initials “T. A. T.” Taylor was the name of one of the missing men.

[“Foul Wretches. – An Extraordinary Family of Murderers and Thieves Wiped Out. – A Fearful Fate – A Party of Indignant Citizens of No Man’s Land Hands Them Over to the Devil. – Are They The Benders?” The National Police Gazette (New York, N. Y.), Jan. 21, 1888, p. 7] 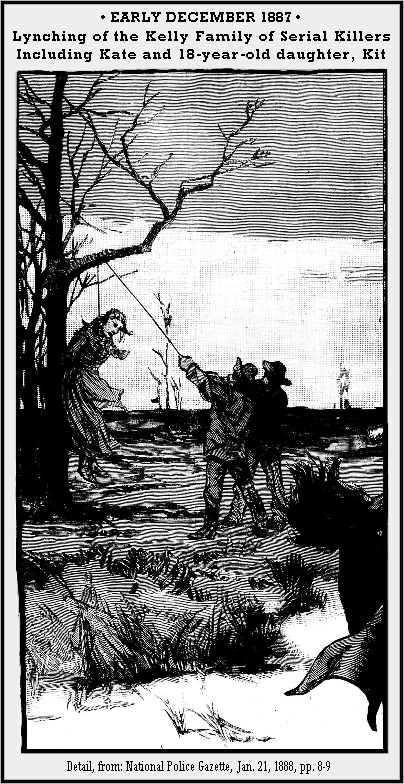 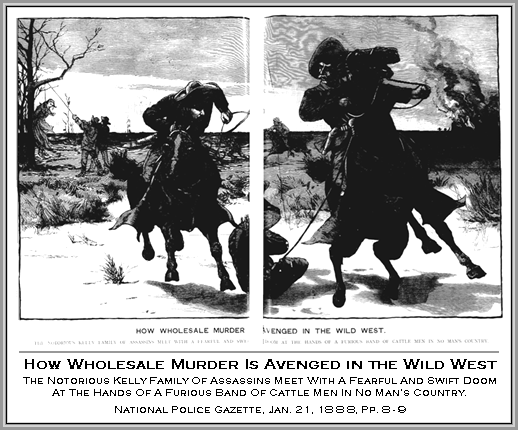 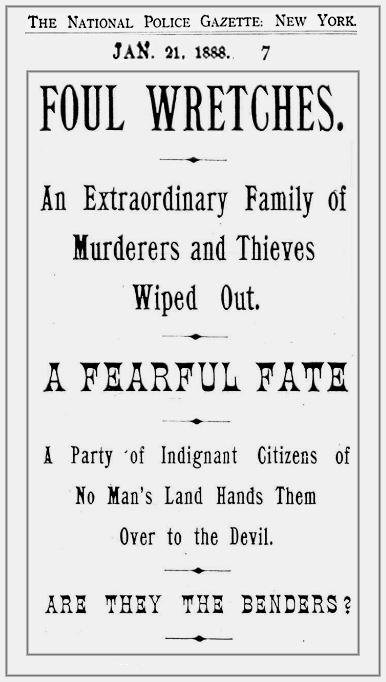 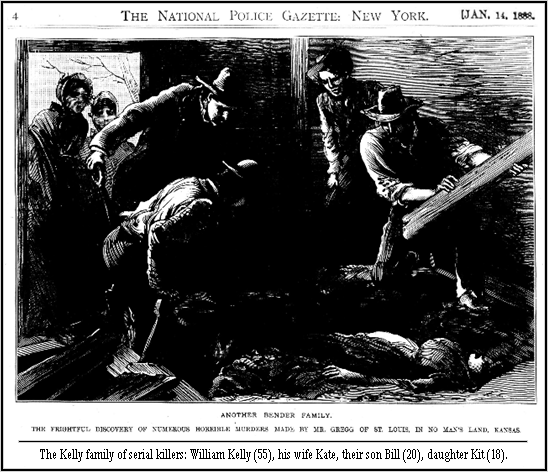 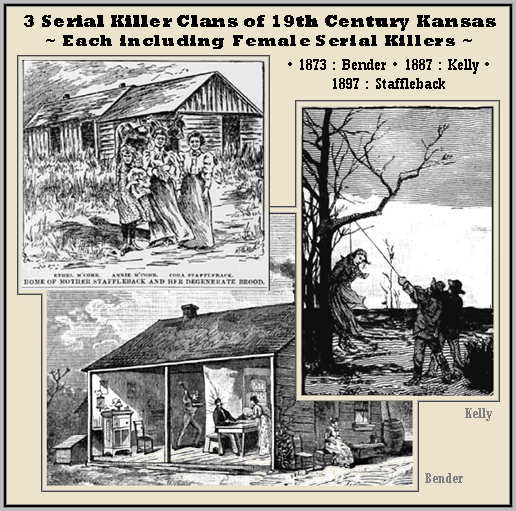