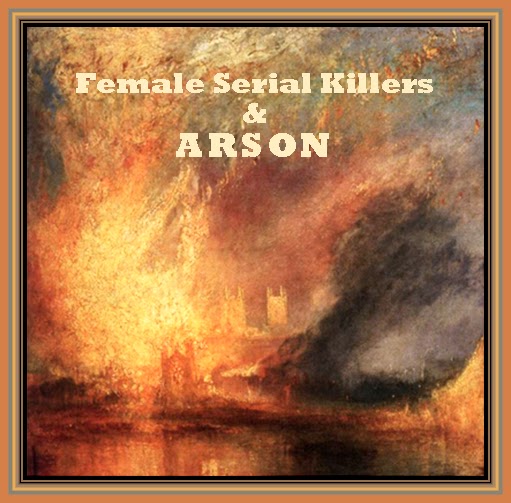 Minor crimes, such its the poisoning of juvenile animals and the burning of numerous houses, are also said to be among the number of her achievements.

Henrietta Weibel, aged 15, was arrested, on a charge of attempted murder and incendiarism, she having on Wednesday night, attempted to burn the infant child of Mrs. Franck, a boarder at the Leopold Palace Hotel, and afterwards made two endeavours to set fire to the house. The baby was lying asleep when the girl set fire to the bed clothes. Another servant extinguished the flames, but the little child was nearly suffocated.

“Sofie Johannesdotter was arrested following the burning down of the Stang house where Sofie was employed as a house servant.”

Neighbors of Mrs. Nason ascribe to her remarkable powers in the way of prophesying fires. Her house on Grove street, it is said, was burned in accordance with her prediction about three years age. Subsequently she had another fiery vision. This alarmed another family in the same block and a watchman was employed. But the second fire occurred on scheduled time, though not until Mrs. Nason had been notified by the owners of the property to vacate. The popular impression is that Mrs. Nason is afflicted with a most dangerous and insidious form of insanity and that all the results of her secret work are not yet known.

The evidence disclosed a strong circumstantial case that Mrs. Stevens first poisoned the deceased, and then after robbing him set fire to his house.

During the night of the 17th she set fire to her lodging, after having first murdered the children committed to her charge.

Then this inhuman woman went and stood in the yard of the house among the excited crowd and quietly waited to see what would happen. As the house was only built of wood, she evidently hoped it would be completely destroyed. But one of the inmates of the house suddenly remembered the woman in the garret and her charges, and called out to the firemen to save the children.

Then Skubliuski was for the first time soon standing in the yard, and when she was asked if the children were already saved, she answered that they were no longer with her. In the meanwhile, the firemen had so far succeeded in subduing the fire that one of them penetrated into Skublinski’s lodging, and, not knowing what she had said, immediately began to search for the children. He soon found one little corpse, and then two more.

It is alleged that Mrs. Shann poisoned her victims with a solution of bichloride of mercury, that she at the life of her daughter in the same manner, and that she burned three houses in Princeton. The motive for her arts was the recovery of insurance money.

It was an irresistible propensity which impelled her to kill her best friends, and to commit the four crimes of arson to which she also confessed.


She had a friend in the wife, of a navy Captain, a Mme. Larrieu. This woman was preparing to leave her house on a visit, and the amiable Mme. Galtie offered to help her pack up. The service was politely declined, but Mme. Galtié was not to be put off so easily, and was at her friend’s house when the trunks were about to be closed. At that moment an alarm of fire was raised, and the basement of the Larjie home was found to be in flames. The discovery of a straw mattress staked in petroleum and of a box of matches close by proved that the fire must have been the deliberate work of a criminal, Mme. Galtié, in a state bordering on hysterics, explained that she had seen a strange man enter the house, and then rush away a moment after the fire had declared itself.

In every case the murderess managed to escape unnoticed and her crimes remained mysteries for many months, until she was finally caught in the act when she strangled Mrs. Marie Wurish, a 70-year-old widow, and applied the torch to the house of the old woman to cover up the murder.

Mlle. Karl, characterized as “the most loathsome woman in France, was the leader of a band of fierce brigands. She beat the inn keeper to death with a wine bottle, and Clarisse  later aided her in burning the body with gasoline.

Clarice Spurlock was suspected of murdering her parents in two separate poisonings. She was formally charged with arson for setting fire to their garage. She was also suspected of slow-poisoning her husband.

The Lanning Murder & Supsequent Arson: Nannie murdered her third husband, Arlie J. Lanning in 1950, after two and a half years of marriage. Lanning's house was willed to his sister and within two months the house burned down before the dead man’s sister could take possession. The now homeless Nannie moved in temporarily with her mother-in law, saying until she received the fire insurance check.  Before she left, however, her mother-in-law died in her sleep. Nannie then stayed with her sister Dovie, who was dying of cancer and soon, she too perished. [RSE, adapted from: Charles Montaldo Nannie Doss “One of the most prolific female serial killers in U.S. history.” About.com]

“At 26, Mrs. Virginia Hill has lost six of her seven children. Two died of natural causes. She admitted killing one other and setting a fire in which three more died, officials said.”

As examples, the FBI agent noted two arson fires at the Hilley house, one when Frank Hilley was still alive, the second when Carol and her grandmother were in the house alone. Urine tests to detect any arsenic were also ordered for people known to have visited the Hilley residence, including police who investigated the fires. “One time some investigators went to that house and afterwards they became sick,” the agent said. “It’s possible they had been given some type of poison. “There was a family that lived next to her for years,” he added. “The children were sick all the time, but doctors could never find out why. ... ‘This family eventually moves and the kids get well in no time at all.” Investigators say they’ve determined the victims were given small doses of arsenic over an extended period.

On September 11, 1982, a Youth Development Center employee, Ken Dooley’s home was shot at four times. The following day, fellow employee Linda Adair’s home was firebombed with a Molotov cocktail. Phone calls were made to the victims following the attacks by a female who claimed to have been sexually abused at the Youth Development Center, but neither victim could identify the caller’s voice.

On January 23, 1985. a mysterious fire broke out at her Burlington home. Blanche blamed a pervert for the blaze, and firemen confirmed arson as the cause, accepting her tale of a nameless man seen loitering around the property. Blanche collected a little fire insurance, investing the cash in a new mobile home. When fire razed the trailer a month later, she blamed that pervert again and collected another insurance check. Someone better finally entered Blanches life on Easter Sunday, 1985. A handsome divorcée at age fifty-one, Rev. Dwight Moore was the pastor of the Carolina United Church of Christ.

Set fire to her house killing two of her children. When one escaped, she tried to avoid saving her. She had poisoned her husband who became disabled from the effects. She blamed her murdered son for the fire and the poisoning of his father.

One her victims was an elderly woman jeweler whom she sprayed with gasoline and set on fire.

After the third attack PK admitted to her therapist that she wanted to commit arson again and was committed to a mental hospital. It was there, when she began talking about stalking and killing women, that she became a suspect. She eventually confessed to all three attacks.

As a young woman, Credonia was obsessed by fire. She had torched the possessions of a man who had failed to acquiesce to her romantic desires. . In another instance, she led her followers to the banana plantation of a relative who refused to join the cult.

Sister Credonia Mwerinde, leader of Ugandan Marianist cult of the Movement for the Restoration of the Ten Comandments located in Kunungu murdered hundreds of her followers on March 17, 2000 by locking them in a worship facility called the ark that was pyrotechnically rigged. All door and windows were secured so that none could escape and then the building was set afire. The official death toll was set at 738. The fire was so intense that the many of the victims’ skulls exploded. Their corpses, many of them children, were buried in several mass graves. Sister Credonia disappeared and has not as of this date been apprehended.

November 16, 2001, staying with Dana’s mother in Slavošov, they robbed a neighbor Jaroslava Šanda (75). The retrieved 40,000 crowns but the victim managed to pull the nylon stocking from Jaroslav face. Jaroslav strangled him to death so he would not be identified. They put the body in bed and surrounded it with lighted candles as a way of burning the house in a delayed manner. The autopsy was faulty and missed signs of strangulation.

One of her victims, named “Countie, 24, met LaBarre through a personal ad in February 2006. He moved in with her soon after and was last seen alive that March, being pushed by LaBarre in a wheelchair at Wal-Mart, his face and hands covered with cuts. A few days later, when police went to LaBarre's home to check on him, they found her tending a burning pile of trash containing what later was identified as Countie's bones.”

Winters had been indicted previously in the death of Ron Winters after authorities exhumed the baby's remains. His death originally had been blamed on Sudden Infant Death Syndrome. But Judge Joseph Fahey dismissed that earlier indictment in June after concluding the grand jury presentation was tainted because the county medical examiner also testified about her belief that the deaths of two of Winters' other children in a 1979 Jefferson County house fire were also homicides.

Once drawn into her web of “love,” she victim would be murdered either through overdose of drugs, or by suffocating him using a plastic bag – in order to simulate a natural death. Another victim was burned to death in his own home. In one case, the murder duo arranged a fake robbery in order to created a cover story for a murder.

“She fastened her two year-old daughter to a post, and then having laid a fire set the child’s clothes ablaze. The helpless infant was burnt to death after having suffered terrible agony. The unnatural mother watched the whole affair. … Two other children of the prisoner died [the previous] year in suspicious circumstances.”

[I]t’s more than sheer malice that underlies the incendiary crimes of serial killers. According to specialists in the psychology of perversion, there is always an erotic motive at the root of pyromania. “There is but one instinct which generates the impulse to incendiarism,” writes William Stekel in his classic work on aberrant behavior. “That is the sexual instinct, and arson clearly shows its connecting points with sex.” True, there are often “secondary motives” behind a pyromaniac’s acts – anger, frustration, revenge. But above all (as Stekel writes). “the incendiary is sexually excited by the flames; he likes to watch them burn.” In short, serial murderers who enjoy starting fires do so for the same reason that they love to torture and kill.

It turns them on. 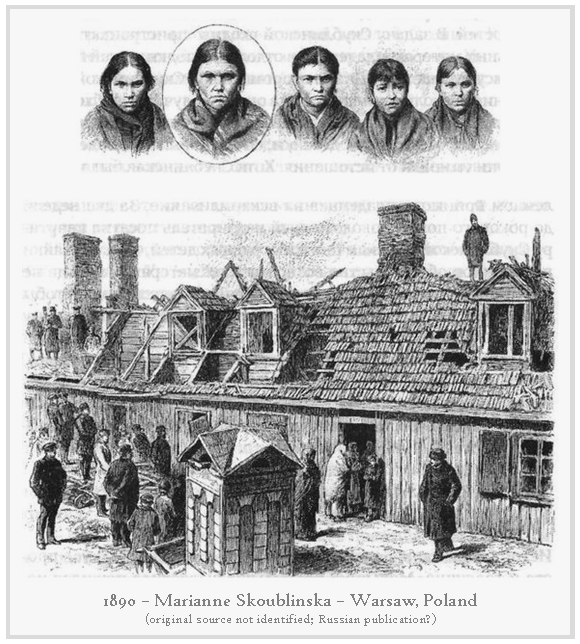 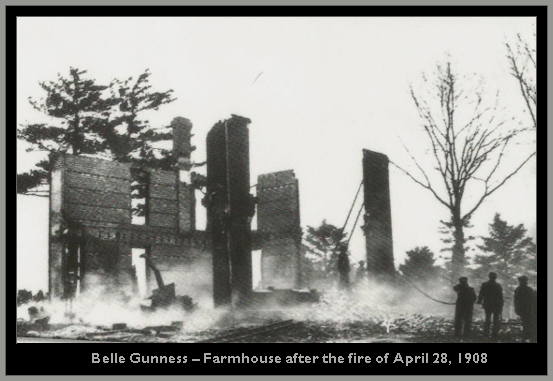 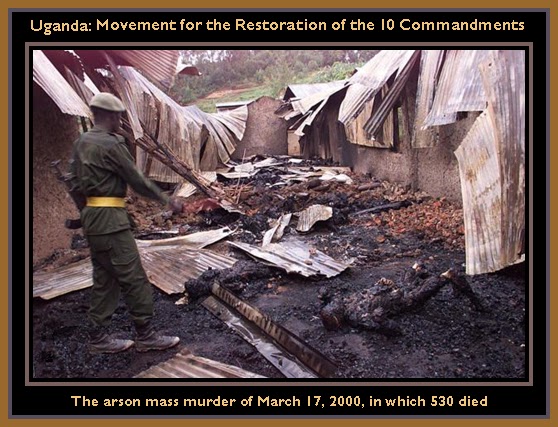