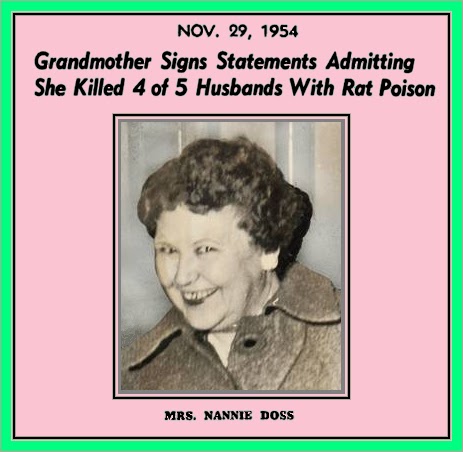 FULL TEXT: Tulsa, Okla. – Affable Grandmother Nannie Doss signed additional statements Sunday night that she used liquid rat poisoning to snuff out the lives of four of her five husbands. She calmly smoked a cigaret as she described in detail how she administered the poison into the food and drink of spouses from four states.

County Atty. J. Howard Edmondson said a murder charge will be filed today against the 49-year-old plumpish, jovial widow for the Oct. 6 death of Samuel Doss, 58, of Tulsa.

~ May Probe Other Deaths ~

The prosecutor, with city officers and Kansas and Oklahoma agents, has questioned the woman since her arrest Friday night and said investigations into the deaths of four of her relatives probably will be undertaken.

He identified the relatives, whom he said succumbed under strange circumstances, as Mrs. Doss’ mother, two sisters and a stepgrandson.

After making her confessions, Edmondson related, Mrs. Doss declared, “My conscience is clear.” He said it was a comment she uttered after each formal statement.

The only surviving husband, Charley Braggs, of Alabama City, Ala. Edmondson said Mrs. Doss told him the marriage to Braggs in 1921 produced four daughters, two now living. They were divorced in 1928.

She poisoned Lanning by doping his food. She said she poisoned him on a Tuesday or a Wednesday and that he died the following Friday.

She said she had been jealous of Lanning because he was popular with the women. That was the same reason she gave for placing the rodent killer in the coffee of Morton, a native of Okmulgee, Okla., and of Indian descent. She claimed Harrelson beat her so she poured liquid poison into his jug of com whisky.

Edmondson said she denied any connection with the deaths of her sisters, her mother or Harrelson’s 3-1/2-year-old grandson, who preceded Harrelson in death by two months.

Mrs. Doss permitted an interruption Sunday long enough to make an appearance for television cameramen. She sat through a filmed interview at which only questions from authorities were permitted.

Officers said before the filming, she insisted on prettying herself for the occasion. She smiled and seemed to enjoy herself during the brief questioning.

She was quoted as saying she poisoned Morton because “I lost my head and blew up when I found out he had been running around with another woman and had bought some rings.”

Edmondson said she told him she poisoned Doss twice because “he was so mean to me.” Once she poured “a lot of poison on his prunes.” After eating them he went to the hospital for 23 days. The day after he returned, she was quoted, she gave him a tablespoonful of poison in a cup of coffee.

Doss drank the coffee and died the next day at the hospital, she recalled.

“He sure did like prunes,” she said. “I fixed a whole box and he ate them all.”

The Lanning Murder & Supsequent Arson: Nannie murdered her third husband, Arlie J. Lanning in 1950, after two and a half years of marriage. Lanning's house was willed to his sister and within two months the house burned down before the dead man’s sister could take possession. The now homeless Nannie moved in temporarily with her mother-in law, saying until she received the fire insurance check.  Before she left, however, her mother-in-law died in her sleep. Nannie then stayed with her sister Dovie, who was dying of cancer and soon, she too perished.[RSE, adapted from: Charles Montaldo Nannie Doss “One of the most prolific female serial killers in U.S. history.” About.com]

Nannie Doss confessed to her crimes in stages: admitting some murders and later adding another to her admitted killings. Ultimately she confessed to killing four of her husbands, her mother, her sister Dovie, her grandson Robert (3-1/2-years old) and her mother-in-law, Arlie Lanning's mother. 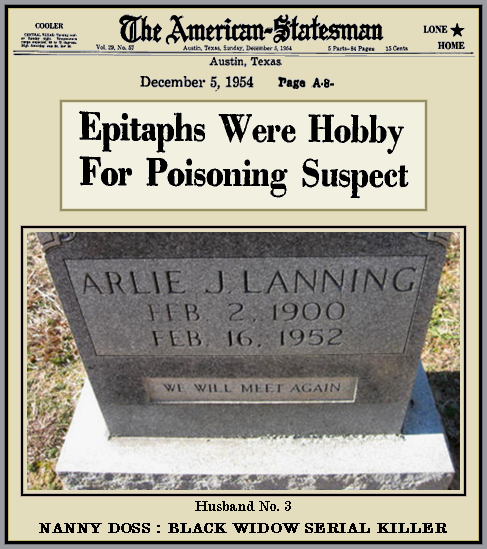 The confessed poisoner, being held in Tulsa fior the murders of at least five relatives including several of her six  husbands, chose the inscriptions and at least two expressed the wish to join her husbands in the hereafter.

The inscription she chose for the gravestone of Arlie J. Lanning of Lexington, husband No. 3, reads simply: “We will meet again.”

Lanning died in 1952 at the age of 52 and his death was believed to have been from natural causes until an autopsy this week showed he died of a heavy dose of arsenic. Mrs. Doss had admitted the poisoning.

She has denied poisoning her mother, Mrs. Lou E. Hazel, who died while visiting her. Mrs. Hazel’s body also was exhumed this week and was found to contain arsenic.

Warrants were issued charging Mrs. Doss with both murders have been issued here.

Special investigators Ray Page of Tulsa and Wayne Owens of Emporia, Kan., who came here after Mrs. Doss confessed killing husbands in both their cities, went to Alabama Saturday to look into mysterious deaths of other relatives in that state.

Mrs. Doss chose this inscription for the tombstone of her grandson, Robert Lee Higgins, at Jacksonville: “Darling how we miss thee.” For the grave of husband Frank Harrelson, also buried in Alabama, she selected a stone with the inscription “God be with you till we meet again.”

Page said he intends to exhume the body of Frank Harrelson and Doss’ step-grandson, Robert Lee Higgins, who died two months prior to Harrelson. The boy lived with Mrs. Doss at the time Harrelson died and was the grandson of her first husband, Charlie Braggs. 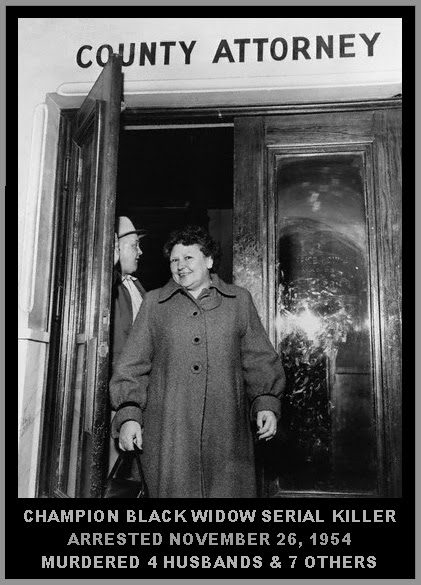 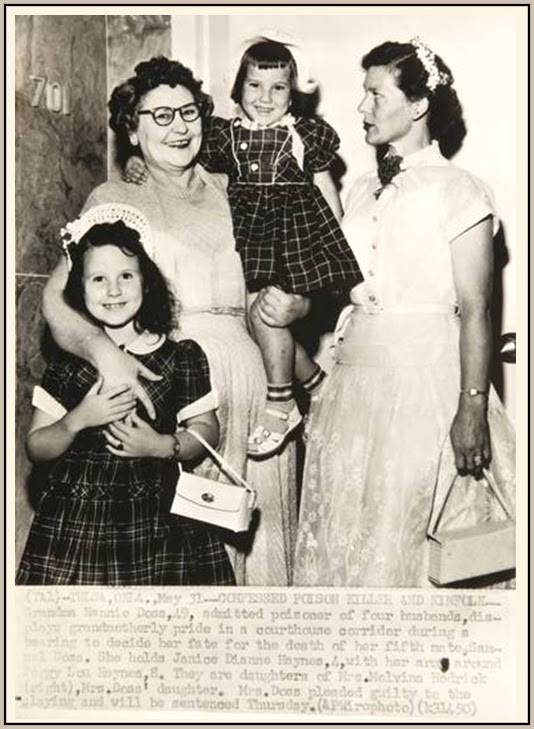 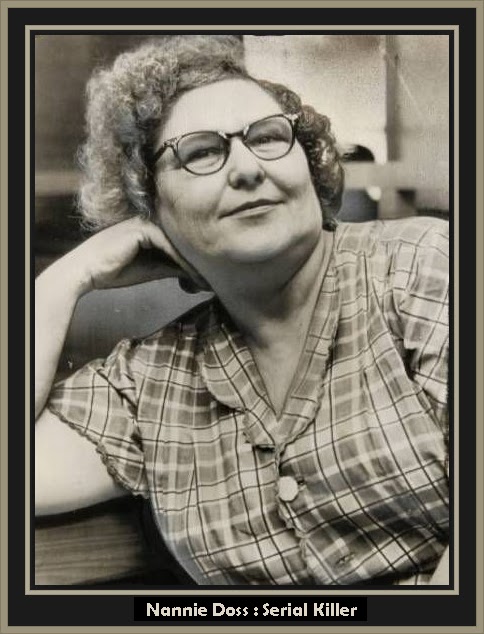 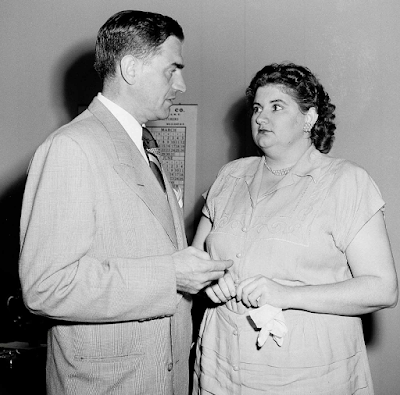 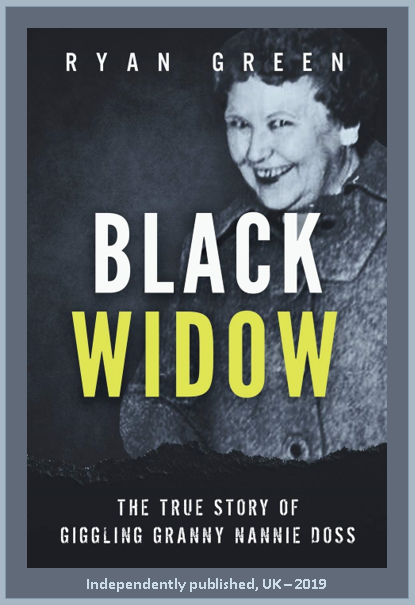