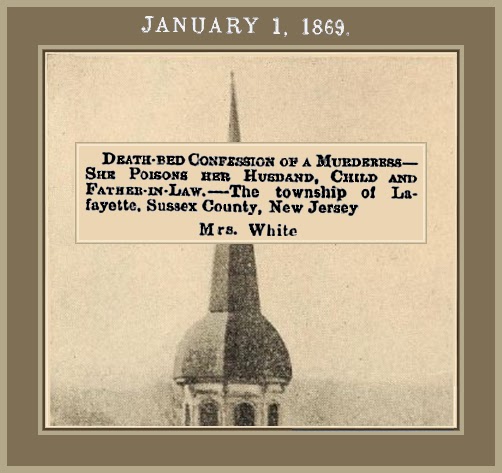 FULL TEXT: The township of Lafayette, Sussex County, New Jersey, is considerably excited at the present time over some revelations made by a woman named White, just previous to her dissolution, which took place last Saturday. The particulars of her confession are horrible in the extreme, and would indicate that the ferocious spirit of Lucretia Borgia has found another shocking parallel in these latter days. Our correspondent writes us that the woman White, who was a widow, fell a victim to consumption. Being a member of the Methodist Church, she sent for her fellow-members to attend her in her dying hours, and stated to them that about seven years ago she poisoned her infant child, so that it died. A year or so after, she administered poison to her husband’s father, and he died too. Later still, on the return of her husband from the army, she dealt to him also a fatal potion, and he too passed into the spirit land. The miserable woman has borne a good character, as also her relatives. They are poor people. The only reason assigned for making this dying declaration is that she desired to rid her conscience of this immense load of crime prior to her death.