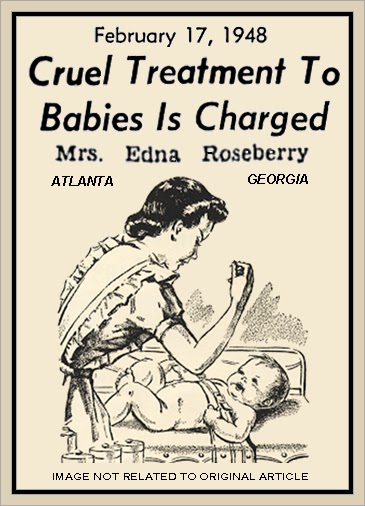 FULL TEXT (Article 1 of 2):  Atlanta, Ga. – A motherly-looking operator of a boarding house for babies was portrayed in criminal court today as a cruel woman who played the radio loud to drown out the screams of infants when she beat them.

A grim-faced jury heard testimony from the state’s witness that Mrs. Roseberry, 52 beat a nine-year-old senseless and left another with the outline of her open hand plainly outlined on its body.

Mrs. Pauline Burch, a neighbor, testified that she stayed at the boarding house for two weeks during which she said she saw one-year-old Charlene Stalling “beaten unmercifully” several times.

She said she called juvenile authorities after arriving at the house one night to find the Stalling child unconscious in its crib, naked and bleeding.

Mrs. Burch testified that Charlene and an older child were in the house at the time. She said she got a wet towel and was trying to wipe blood from the baby’s face when Mrs. Roseberry entered.

“I kept trying to get her to help me do something about the baby,” Mrs. Burch testified. “But she had lost her purse and all she would say was ‘help me look for my pocketbook and leave the damn baby alone.

“There’s nothing the matter, but I had to beat it.”

Mr. and Mrs. Roy Dempsey, who live nearby, testified they had seen Mrs. Rosenberry abuse children and said she always “turned the radio on real loud” before beating the babies.”

Mrs. Pauline Burch, a neighbor, testified that Mrs. Roseberry, in a drunken condition, beat the baby girl until blood ran from her mouth. She told the court that the boarding house keeper turned up the radio to drown out the cries of the baby.

“Mrs. Roseberry, have you any previous record?”

“Yes, sir, for hijacking, bootleg liquor in Kansas back in 1934,” she replied. She told the court she was given from 10 to 21 years on a charge of armed robbery and served six years of this term.