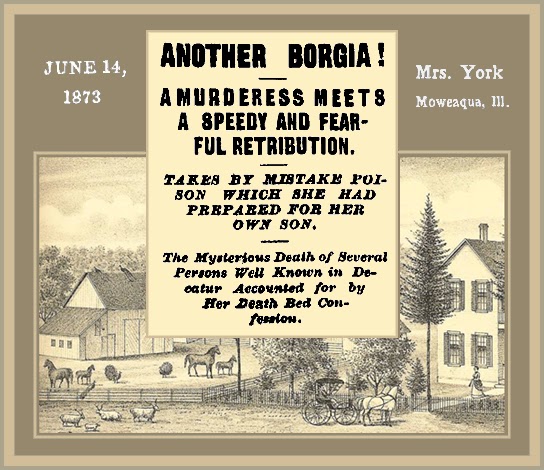 NOTE: Mrs. York’s confession was later shown to be the product of delusion. She had a history of mental illness. This post remains part of the collection for the sake of other researchers who may come across the case on their own and may not discover the reports that led to the discrediting of Mrs. York's confession.

FULL TEXT: Many of our people doubtless remember the sudden death, sometime in November last, of Mr. A. W. Drake, formerly of this city, but living for a year previous to his death on his farm, east of Moweaqua. At he time of his death his mother-in-law, Mrs. York, was keeping home for him, he having been a widower for several years. Soon after the death of A. W. Drake, Mrs. York went to Kansas to live with her own son. A few days ago she died suddenly and on her death bed made the astounding confession that she had committed several murders, all the victims being her own relatives.

The first victim was her own husband whom she poisoned in September, 1865. The other victims of her fiendish operations were Mrs. A. W. Drake, her own daughter, two children of A. W. Drake, the wife of B. R. Drake, formerly of this city, and lastly A. W. Drake, while in charge of his family as housekeeper; soon after whose death she went to Kansas to live with her son. Not satisfied with the terrible work of death already done, she prepared a dose of poison for her own son, who had offered her the hospitalities of his home for the balance of her life. Not having an opportunity to administer the dose for a day or two, she set it aside till a convenient opportunity should offer to carry out her hellish design. One morning soon after preparing the poisonous mixture, she was feeling slightly unwell, and went to the cup where she had placed the cup containing the poison, and where she had also placed a cup containing some simple preparation her ailment. By mistake she swallowed the fatal dose she had prepared for her son. Being taken terribly sick, a physician was summoned who at once discovered the presence of poison, and told her there was no help for her. Overwhelmed by the certainty that death stared her in the face, she proceeded to detail the terrible facts we have given above.

It will be remembered that there was considerable talk at the time Mr. A. W. Drake died, about the very sudden and mysterious manner of his death; and that the contents of the stomach were sent to St. Louis for analysis, but for some reason the process was never gone through with. We understand that the contents of the stomach are still in existence, together with a bottle of Vinegar Bitters which. Mr. Drake had been using for a few days previous to his death; all of which will probably be thoroughly analyzed.

This terrible affair rivals in enormity any thing of the kind that has transpired in a generation, and develops a depth of depravity and wickedness which we are glad to know is extremely rare.

[“Another Borgia! - Murderess Meets A Speedy And Fearful Retribution.  - Takes By Mistake Poison Which She Had Prepared For Her Own Son. - The Mysterious Death of Several Persons Well Known in Decatur Accounted for by Her Death Bed Confession.” The Daily Republican (Decatur, Ill.), Jun. 14, 1873, p. 3]


The following article reveals that Mrs./ York’s confession was untrue.

FULL TEXT (Article 2 of 2): A special dispatch from Decatur, Ill., published in yesterday’s Tribune, contained an account of the alleged poisonings of six persons by a Mrs. York, who admitted on her death-bed that she killed them. The telegram stated that in September last A. W. Drake, a farmer who lived near Monmequa, died very suddenly and under circumstances which indicated foul play; that the stomach of the deceased was sent to St. Louis for examination, but for some unexplained reason the contents were never analyzed. At the time of Mr. Drake’s death his mother-in-law, Mrs. York, was keeping house for him. The dispatch further stated that Mrs. York was taken violently ill at the residence of her son in Kansas, and, being assured that she could live but a few hours, made a confession, the substance of which was that she had poisoned her husband in 1865, Mrs. A. W. Drake, her daughter, two children of A. W. Drake, her grandchildren; the wife of E. B. Drake, and A. W. Drake, adding that she had mixed a dose of poison for her son, but had taken it herself by mistake.

The story is indeed sensational, and would make Mrs. York the peer of Mrs. Sherman if it were true. Mrs. E. R. Drake, whose wife is said to have been one of her victims, lives in Chicago, and is in the employ of Allen & Mackey, dealers in carpets. A reporter of The Tribune called on him yesterday morning for information regarding Mrs. York and the Drake family, and was told that je had heard nothing of Mrs. York’s death. He discredited the story the story, remarking that, even if she made the statement attributed to her, it was untrue, and could have been uttered only while her mind was in an abnormal condition. Mrs. York, he said, was insane in 1861 and 1862, and had to be watched, although she was not violent. She was very old – at least 72 – and childish. While on a visit to friends in Minnesota, in the year mentioned, it was discovered that her mind was unsound, and her son, who lives at Prescott, took such good care of her that she apparently recovered, and a few years afterwards went to live with A. W. Drake, at Moamequa, Ill., to having a large farm near the village, and requesting her to come. His wife had a child while she lived there, and was never well afterwards, being attacked with what is popularly called “milk leg,” and dying after being an invalid for four months. Last October Mr. Drake himself died, as the neighbors imagined, under suspicious circumstances. He was taken ill at 10 o’clock in the evening, and expired at 4 o’clock the next morning. He had been subject to cramps in his limbs for two years, and frequently remarked that he was afraid they would carry him off suddenly.

His death was supposed to have been caused by heart disease, but some physicians thinking poison had been administered, it was determined to send the stomach to St. Louis and have the contents analyzed. Mr. E. R. Drake, of Chicago, and Mr. P. J. Drake, of Indianapolis, brothers of the deceased, went to Moamequa to attend the funeral, and, having no suspicions of foul play, declined to pay the $500 demanded for an analysis, and accordingly it was not made. They heard talk of the supposed criminality of Mrs. York, but they placed no reliance on what was whispered. She loved Mr. Drake better than her own son, and showed her regret for his death by crying for several hours. She, too, heard the rumors afloat, and was grieved at them. After the interment of Mr. Drake, she went to live with her son, Jerome B. York, who has a farm near Ouichata, Kansas. In regard to his own wife, Mr. E. R. Drake told The Tribune reporter that she died June 5, 1864, in Chicago, of congestive chills, without ever having seen Mrs. York. How the latter could have poisoned her when hundreds of miles away he cannot understand. A. W. Drake’s two children died in Decatur. They were very young, and Mrs. York died very suddenly. He was found in the stable one morning dead, and, as he had two or three attacks of heart disease, that was believed to have caused his death. Mrs. York had three daughters, two of whom are dead. One of those was Mrs. A. W. Drake, and the other Mrs. Dr. Rosenberg, of Jackson, Ill.

The statement of Mr. Drake certainly shows that Mrs. York could not poisoned three of the persons she is said to have said to admitted killing, and hence it is very probable that the confession, if made, was uttered while suffering from mental aberration.