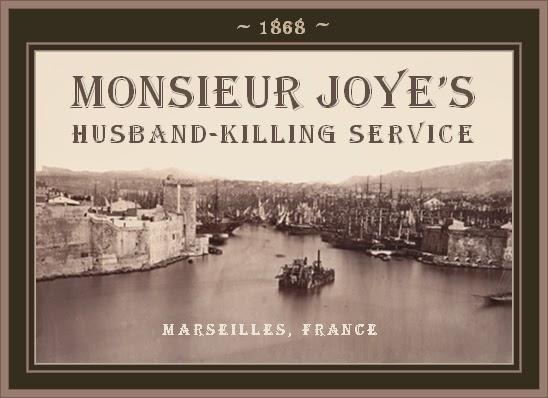 FULL TEXT: An extraordinary trial has just been brought to a close at the Assize Court of the Bouches-du-Rhône. The accused were seven in number, all residing at Marseilles – three were widows, named Ville, aged forty-one; Salvago, thirty; Gabriel, twenty, all of whom were charged with causing the death of their husbands by administering arsenic or other noxious substances. The others were a man named Joye, a herb-seller; Fanny Lambert, a fortune-teller; and two women named Dye and Flayol. The crimes were brought to light in a singular manner:—

A mason named Marino is married to a flower-seller of the Cours St. Louis; on the 20th of August last the woman Lambert wont to the wife and told her to be on her guard, as her husband had a mistress who had determined to poison her. “If you do not believe me,” she added, “go to the herbalist Joye; he it is who is to provide the stuff.” The woman Marino told this to her husband: the latter had, in fact, been on intimate terms with Ville, but, although guilty of deceiving his wife, he was far from desiring her death. Marino proceeded to the woman Ville and questioned her, but without obtaining any admission from her. Then going to the herb-seller, he said, “ I am the lover of Madame Ville, and know all that has been done; but you have only half accomplished your work; I wish to live freely with Madame Ville—can you not rid me of my-wife?” Joye, having closely examined the countenance of Marino, said – ”Are you a man?” The other, without losing his self-possession, replied, “If I were not, I should not be here; but I warn you that I will not have my wife suffer so long as Monsieur Ville did.” This latter remark reassured Joye, who then promised to furnish him the next day with a powder to be administered, adding that it was the fault of Fanny Lambert if the murdered man Ville had lasted so long. The scheme thus attempted had proved thus far so successful that Marino resolved to try it with the woman Ville; and, returning, he told her that he was resolved to kill his wife in order to live freely with his paramour. The woman, falling into the snare, acknowledged that she had poisoned her husband, and related that the women Salvago and Gabriel had got rid of their husbands in the same way. Armed with this evidence, the man proceeded straight to the police authorities, and related the whole affair, and the chief accused wore arrested.

The judicial inquiry which followed brought to light a series of facts of the grossest immorality, and involved the other prisoners as accessories. Each of the three women had murdered her husband in order to remove a restraint on her debauchery:—

The only one that showed any hesitation to commit a murder was the youngest accused, Gabriel, but her reluctance was said to have been overcome by her mother, the prisoner Dye, and the woman Fayol. The fortune-teller, Fanny Lambert, had aided the wives in procuring the poison, and was even charged by the woman Ville with having first instigated her to the crime. The man Joye added the profession of fortune-teller to his trade of herb-seller, and two witnesses who had consulted him as such declared that he had first suggested to them that they were unhappy in their married life, and then offered his services to rid them of their husbands. His method was first to propose supernatural means, and then gradually accustom them to the idea of employing poison. One woman he had instructed to procure a nail from a coffin in a certain cemetery, and to plant it in the ground while pronouncing the name of her husband; he then added, “After that come to me and I will give you something that will do the rest.” The substance which he usually employed was arsenic, of which a large quantity was found concealed in his shop.

The gross superstition which the evidence given on the trial showed to exist among the lower classes of Marseilles is almost incredible; one woman, after consulting Joye, had prayed every night from eleven to twelve to the moon and stars for success in a love affair; and on this fact being mentioned in court she was observed to make the sign of the cross; the accused Flayol had advised the woman Gabriel to burn a taper to the Virgin, so that her crime might not be discovered. Joye while in prison made three different attempts to commit suicide.

The three principal accused confessed their guilt, and after a trial which lasted six days the women Dye and Flayol were acquitted, and all the others found guilty, with extenuating circumstances. The woman Salvago was condemned to twenty years’ hard labour, and the four others to a similar punishment for life.

L'affaire des empoisonneuses de Marseille – The case of the poisoners of Marseilles is a criminal event having taken place in 1868 in the Panier district in Marseille. Three women were sentenced to life imprisonment for poisoning their husbands under the influence of Fanny Lambert, a card-maker, and a spiritualist herbalist, Jean-François Joye. The trial opened on December 4, 1868 and on the 8th sentences are pronounced. Jean-François Joye, Fanny Lambert, Marie Autran, and Josephine Duguet were sentenced to forced labor for life and Rosine Salvago for 20 years. Olive Marie, mother of Josephine Duguet and Flayol are acquitted. [Wikipedia] 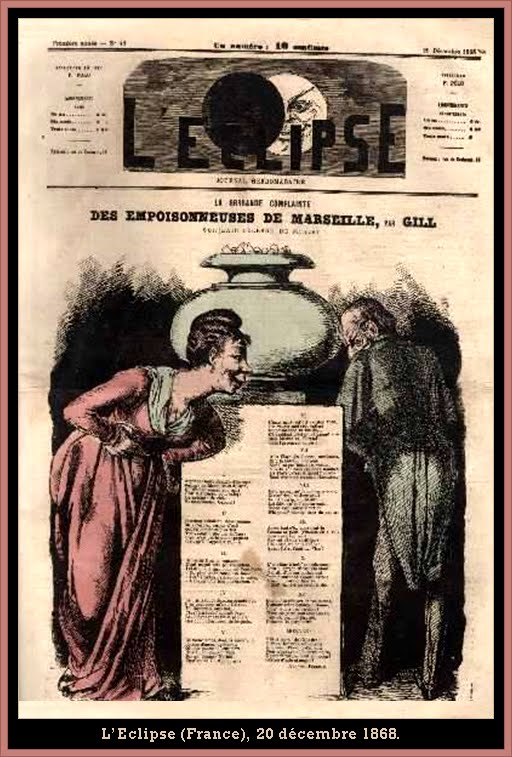