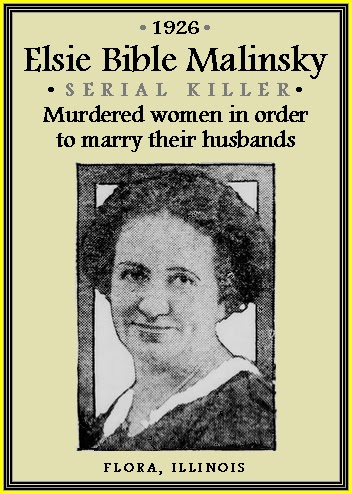 She is sometimes known as "Essie Bible."


FULL TEXT (Article 1 of 4): Flora, Ill., March 8. – Ernest L. Malinsky, locomotive engineer, and his wife, Elsie Bible Malinsky, were arrested at their home last night and lodged in the Clay County jail at Louisville, charged with the murder of his first wife, Mrs. Laura Malinsky, who died under mysterious circumstances Sept. 26, inst.

Malinsky’s attorneys were informed today that the arrests were based on the report of a St. Louis chemist, who had said he had found arsenic in the viscera of Malinsky’s first wife.

The first Mrs. Malinsky was said by an attending physical to have died ptomaine poison and cerebral hemorrhage. She becomes ill after eating watermelon. On the request of relatives at Iola, Ill., however, State’s Attorney Williams Dec. 11 the body was exhumed and the vital organs removed for examination.

After extensive texts Dr. Ralph Thompson of the National Pathological Laboratory of St. Louis reported to State’s Attorney Thompson that he found no traces of poison and expressed the opinion Mrs. Malinsky died of natural causes. His opinion had the concurrence of Dr. W. D. Collier of St. Louis University, who was retained by Smith & Smith of Flora, Malinsky attorneys.

Later, however, a biological chemist took took the organs for further examination and it was following receipt of his report that Sheriff Cogswell arrested Malinsky and his wife. 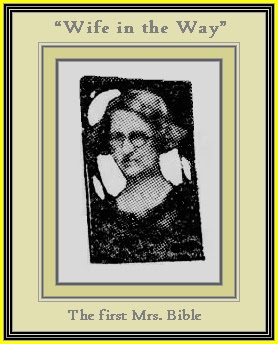 Mrs. Malinsky said she gave the poison to the woman in a glass of water.  She absolved her husband whom she married six weeks after the death of the first Mrs. Malinsky, of all blame.

In passing sentence on Mrs. Malinsky, Circuit Judge Thomas M. Jett unleashed a scathing denunciation of the woman and her crime.  “If you were a man I would hang you,” the judge told her. “The fact that you are a woman is all that saves you.”  He described the crime as “cowardly.”

Mrs. Malinsky was calm as she received the life sentence, and remained as unmoved during the period of several minutes the judge lectured her.  She made no comment.  She will be taken to the penitentiary Wednesday.

Malinsky, who accompanied his wife into the courtroom, cried when sentence was pronounced.  He declared he had no knowledge of Mrs. Malinsky having poisoned his first wife.

Malinsky was arraigned late Tuesday on the murder charge and held to circuit court in default of $15,000 bond.  The state’s attorney said Tuesday night the charges against Malinsky “probably will be dropped,” but added he has not definitely decided what action he will pursue.

The present Mrs. Malinsky has been married three times.  She was divorced by her first husband, Wilbur Cope, on the grounds of desertion after they had lived together two years.  Her second husband, Bible died December 11, 1923.  The attending physician said death was from pleuro-pneumonia and contributory tubercular meningitis. 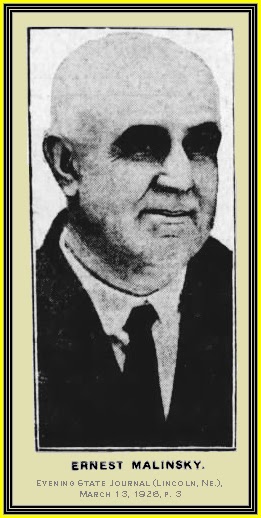 FULL TEXT (Article 3 of 4): Flora, Mar 11. – “I don’t know what to think of her. She has always been the best mother, the kindest woman imaginable. She took good care of my children when they were little and they were always considered her as one of the family. My wife liked her.”

In the foregoing manner did Ernest Malinsky, Baltimore and Ohio railroad engineer, characterize his wife, Mrs. Elsie Malinsky, who Tuesday pleaded guilty to poisoning Malinsky’s first wife, Mrs. Laura Malinsky. Sentenced to pass the remainder of her life in prison in Joliet, Mrs. Elsie Bible Malinsky will be taken there Friday to begin her term.

Wednesday afternoon for the first time since the ordeal in the circuit court room, Malinsky saw his wife. He visited her in the Clay county jail. Certain legal technicalities in the connection with Malinsky’s taking over the care of the second wife’s none-year-old son by another marriage had to be taken care of. She was the legal guardian of the son: now her husband is to be the guardian.

Although she has shown no signs of regret at the deed to which she so calmly confessed Tuesday, Mrs. Malinsky is rapidly breaking down. She cries a great portion of the time and her spirits are apparently drooping lower and lower as the hour for her journey to the penitentiary draws nearer.

While she exhibits not the slightest trace of remorse for the murder. Mrs. Malinsky is torn by thoughts of the separation from her husband. She may not realize the enormity of her crime; she does realize what the separation means.

Meanwhile her husband stolidly plans to resume his labors either Thursday or Friday. He is free on $15,000 furnished by business men here. His neighbors apparently accept the story told by Mrs. Malinsky, that she alone is guilty of the murder. 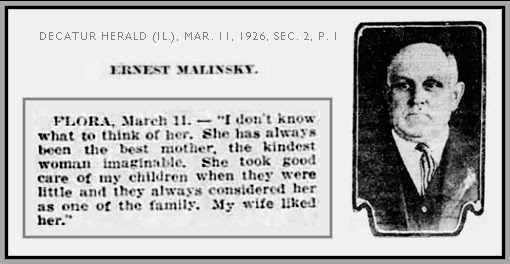 FULL TEXT (Article 4 of 4): Flora, Ill., March 11. – State’s Attorney Harold S. Williams told the Associated Press tonight that Mrs. Leslie Bible Malinsky, under life sentence for the poison murder of the former wife of her husband, has made a further confession substantially admitting having committed two other poison murders and attempting a fourth one.

Confronted with circumstantial evidence county authorities had obtained since her first confession to the poison murder of Mrs. Laura May Malinsky last fall, the woman broke down yesterday, the state’s attorney said, and made a further confession.

Williams said she did not make a complete confession but substantially admitted that about 15 years ago she poisoned and kills the wife of Havill Bible in order that she might marry him, and that about three years ago she fatally poisoned Bible when she became dissatisfied with him as a husband.

The woman is 44 years of age and has had three husbands. Her first husband Wilbur Cope, divorced her about 18 years ago after it was alleged she made an unsuccessful attempt to poison him, Williams said.

Later she was convicted in the Clay county court with living in adultery with Bible and it was after this that Bible’s first wife died. The then Mrs. Cope married Bible and his death occurred in December, 1923.

She later became the housekeeper for Ernest T. Malinsky, a locomotive engineer, and gave poison to his wife resulted in her death last September 26. She married Malinsky a few weeks later and her arrest recently followed exhuming of the first Mrs. Malinsky’s body and examination of the viscera.

Mrs. Malinsky was sentenced here Tuesday and Sheriff Cogswell left with her this morning for Joliet prison. The confession to the triple poison murders was made to the sheriff, authorities said. Cogswell was not reached for a comment.

State’s Attorney Williams said no additional charge would be filed against the woman because she is under sentence to serve a life term.

Her present husband is under bond on a murder charge in connection with the death of his first wife but the prosecutor has indicated he does not intend to push the case because Mrs. Malinsky absolved him of all blame. 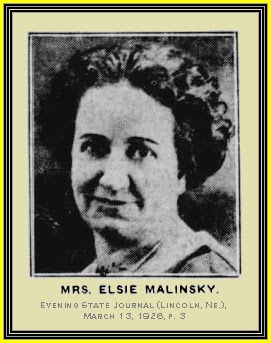 The woman is 44 years old. She has had three husbands. Her first husband, Swalbur Cope, divorced her about eighteen years ago after she had made an unsuccessful attempt to poison him, Williams said. [“Woman Admits Other Killings,” The Lincoln Star (Lincoln, Neb), Mar. 12, 1926, p. ?] 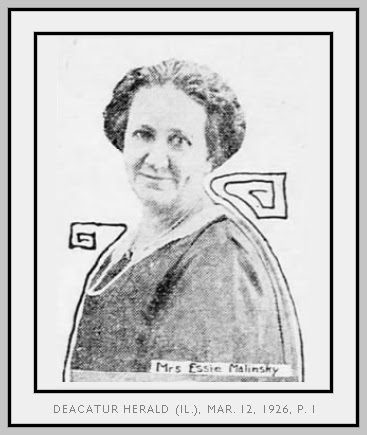 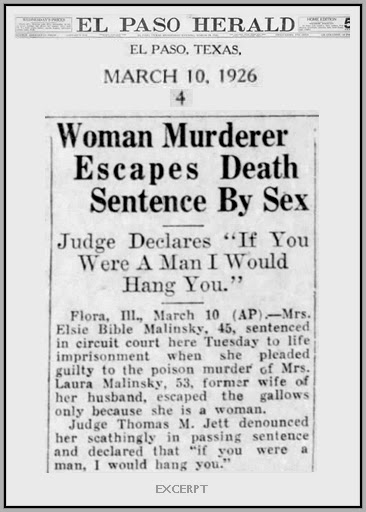 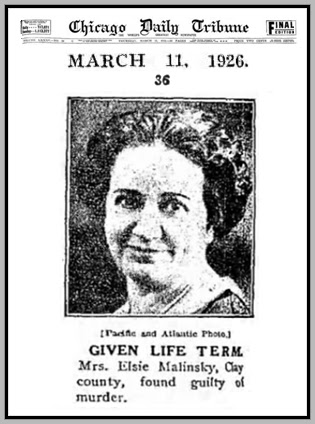