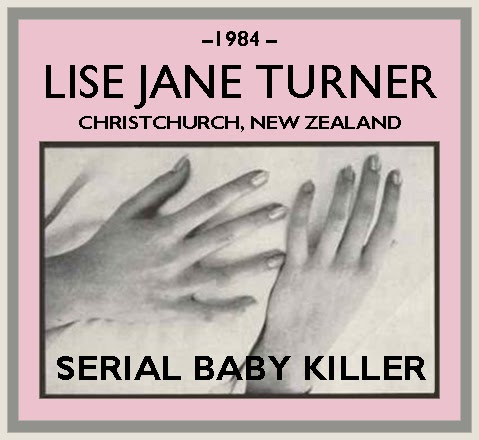 Note: Some news reports give the first name as “Lisa.” A 2011 report published by two psychiatrists do not name their subject, yet the details of the case make it obvious that their subject, who the authors call “M,” is Turner.

Lise Jane Turner, of Christchurch, New Zealand smothered three babies – including two daughters, Megan and Cheney Louise – between 1980 and 1984. She also tried to kill two others – girls aged five weeks and four months – she was babysitting. She tried to kill the four-month-old twice. The deaths were attributed to the vague, mysterious cause called by a baffled medical establishment who created the non-diagnosis diagnosis terms SIDS (Sudden Infant Death Syndrome) or “Cot death” for classification purposes.

She tells of 13 miscarriages before conceiving her daughter and was desperate for a baby. It was a difficult pregnancy but the little girl “was everything to me”.

But when the child developed breathing problems she became obsessed that her baby would die and carried out the “mercy killing” so she had some control over when her baby died. She then broke down and was admitted to a psychiatric institution.  She did not have a major psychiatric illness but was diagnosed with a severe personality disorder.

It was the death of an eight-month old boy Lise was babysitting that prompted the police investigation that led to the discovery of the woman’s homicidal career.

Following the mysterious deaths of her own two babies, Lise, apparently grief-stricken was able to engage trust and compassion that would have helped her gain access to her later victims and may have allayed suspicions.

She repeatedly looked for jobs in childcare, tried to smother two of the babies in her care for “revenge” and killed a 9-month-old child she was babysitting for a neighbor.

One of the babies Turner tried to kill was the daughter of one of the wife-swap partners, a woman with whom her husband wanted to run away.

She had a second daughter to try to keep her man, Dick Ashley, but had no interest in being a mother. Lise, explained herself to psychiatrists, Dr Josephine Stanton and Dr Sandy Simpson, who quoted the killer in a report published in 2011:

“This kid screamed from the day she was born to the day that she died.” M started drinking, did not clean the house and would not get dressed all day. She killed the baby in a fit of anger.

“I thought, okay. I never got caught for [the first baby’s] death, I don’t want this child, how am I gonna get rid of it, you know, so I smothered her the same way as I did with [the first baby].”

Lisa Jane Turner, 41, was released from Arohata Women’s Prison in August 1997 after serving 13 years for killing three babies and attempting to murder two others. The father of  Lise’s murdered babies reunited with her following her release.

At the time the baby-killer’s release, Lauree and Kelvin Tinnion, whose son Michael was suffocated by Lise, issued a news release saying they felt freeing her was “the end of justice” for their son, who by then, would have been a teenager.

According to the 2011 psychiatrists’ report, Lise’s “driving need to be with children led her to childcare but two further attempted murders and the third murder were motivated by revenge and retaliation.” [R. St. Estephe] 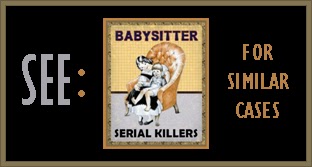