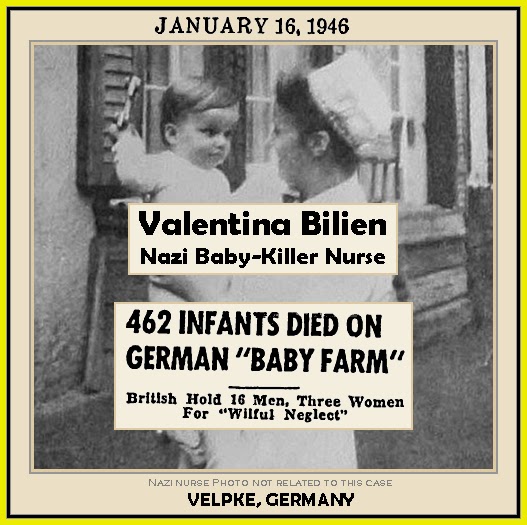 Valentina Bilien, nurse in the “children’s home” at Velpke, was one of many German medical professionals put on trial after WWW II for crimes against humanity. While the eugenics paradigm of the was an official (yet not publicized) policy it would be naïve to classify the serial killers of babies in these cases as mere instruments of democide (murder by government). Many of the free-lance serial killer nurses of recent decades are motivated by eugenics., euthanasia as well as more personalized varieties of a “playing God complex.” While some criminologists might prefer not to classify the physicians and nurses who murdered babies on behalf of their government, they will be included in our collection dues to their close parallel to non-government of serial killers: physicians, nurses, baby farmers, and baby-sitters.

The accused, Heinrich Gerike, Georg Hessling, Werner Noth, Hermann Muller, Gustav Claus, Doctor Richard Demmerich, Fritz Flint and Frau Valentina Bilien, were charged with committing a war crime " in that they at Velpke, Germany, between the months of May and December, 1944, in violation of the laws and usages of war, were concerned in the killing by wilful neglect of a number of children, Polish Nationals."

VALENTINA BILIEN was a German national, at one time married to a Russian and formally a teacher in Russia. In 1944, she was appointed to the post of matron at a newly established children's home in Velpke, a village near Helmstedt, Germany. She had no previous experience whatever in running a children's clinic. Assisted by four Polish and Russian girls, the health of the infants soon deteriorated to the extent that within months more than eighty children died through gross negligence. The infants had been forcibly removed from their Polish mothers (who were working on farms as slave labour) at four months old. At a British Military Court, held at Brunswick in March/April, 1946, Frau Valentina Bilien was found guilty of a war crime and sentenced to 15 years imprisonment.

Newspaper report on trials involving this and another German government baby farm:

The children were born to slave laborers working on farms and in a factory near Brunswick and were considered illegitimate by the Nazis, the investigators said.

Separated from their mothers at ages of 10 days to three months, the children were taken to two “farms” or “clinics” in the villages of Velpke and Ruehen. Out of 114 placed in wooden huts at Velpke, 92 died, and all of the 370 placed in corrugated iron sheds at Ruehen succumbed.

Their bodies were wrapped in toilet paper and stacked in the lavatory until cardboard boxes arrived in which the children were buried in unmarked graves, the British said. The bodies were packed three or four to the box.

Cause of the deaths, the report said, was willful neglect, incorrect feeding, premature separation from mothers and generally filthy conditions of the “clinics.” Diarrhea was given as a general cause, occasioned by improper diets.

The report said the babies were kept in crude cribs which were seldom if ever cleaned. Mattresses were described as so dirty many of them had rotted to pieces, and insects covered the ward walls as well as the babies themselves.

“The baby farms were staffed by civilians of the local Nazi party and labor organizations,” a British investigating officer said. “The person ultimately thought to be responsible is the notorious gauleiter of Hannover, Hartmann Lauterbacher, who has not been located.