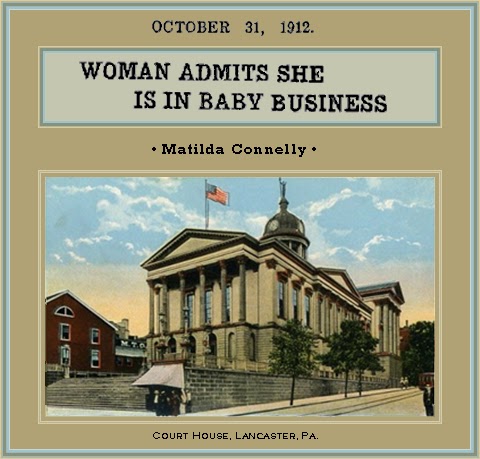 FULL TEXT: Lancaster, Il., Oct. 31.— Coroner Miller is making an investigation of information to the existence of a “baby farm” in this city. Mrs. Matilda Connelly, a middle-aged woman, has been arrested on a charge of concealing the deaths of infants and of causing them to buried without permits.

She has made a written confession in which she admits having harbored young women in her home and of burying four infants in her back yard.

***
FULL TEXT: Matilda Connelly, residing on Lafayette street [Lancaster, Pa.], has been arrested pending an investigation of the mysterious death of an infant child. It is claimed that some unknown girl gave birth to a baby at Mrs. Connelly’s house. Whether it was born dead or alive is not known, but on Friday the body of a child was dug up in Mrs. Connelly’s yard or garden by Constable Lollar and Sergeant Negley. The case is now being investigated by Dr. Frank G. Hartman, deputy coroner, and district attorney Griff. If it is shown that the child was born alive there may be more serious charges.
Monday afternoon a coroner’s jury, composed of Adolph Albert, George W. Miller, W. J. Brandt, John Grosh, S. W. Graham and G. W. Huber met at the office of District Attorney Groff to hear evidence in this case to ascertain whether the accused had done nothing to cause its death. The evidence of Constable Lollar and Officer Negley was that they found the body of a dead child in Mrs. Connelly’s yard last Hartman testified that from his examination he could not tell if the child had been born alive or dead. A statement made by Mrs. Connelly to Alderman Doebler was read. It allowed that she took a young woman to her house at the request of Dr. Kline, early in October. She was known as “Kitty” or “Miss Jenkins.” After being there eleven days she gave birth to a premature child which the witness buried.
Dr. Kline testified that the woman came to him her condition. She wanted to go some place and did not have sufficient money to go to a hospital to have her child. She afterward called at his office and said she had a child and she did not have any money to pay him but she would send it to him which she never did and he heard nothing more from her.
Samuel Reed, son-in-law of Mrs. Connelly testified that he saw a strange woman at the house and suspected something wrong, and informed the police.
The cornoer’s jury retired to agree upon a verdict.
~ Corner’s Jury Verdict ~
We found that on October 11, 1912, one reputed to be a Miss Jenkins went, at the request of Dr. B. Frank Kline, to board with Mrs. Matilda Connelly, No. 516 Lafayette street, Lancaster, Pa. That on October 18, 1912, a female child was born alive to Miss Jenkins. Said child was afterwards found buried by the said Mrs. Connelly. We also find that said received no assistance from Mrs. Connelly and died of neglect. – Geo. W. Huber, W. J. Brandt, Geo. B. Miller, Sam W. Gramm. A. Albert, John Grosh.
The case is now out of the hands of the coroner and district attorney Groff has charge of it. It is not known what charge will be made against Mrs. Connelly.
[“Mysterious Baby Case – Body Of A Child Found In A Yard On Lafayette Street.” The Lancaster Morning Journal (Pa.), Oct. 12, 1912, p. 2]
*** 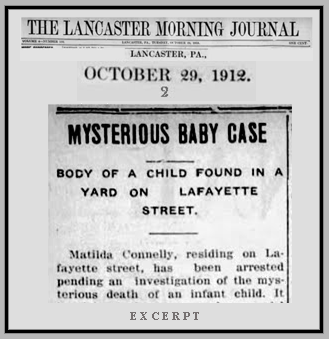