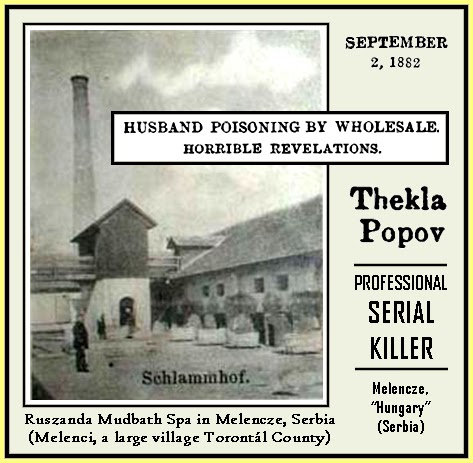 FULL TEXT (Article 1 of 5): A telegram from Vienna states that Thekla Popov, a peasant woman who is being tried on a charge of aiding and abetting upward of 100 women in poisoning their husbands, is a very remarkable character— destined to occupy a position at once unique and picturesque in the annals of crime. She is a gipsy, and is now some 70 years of age. She lived in a little village named Melencze, and it may almost be said that murder was her trade. People say she had her agents and emissaries, whose business it was to keep up her “connection,” and it must have been a horrid and gruesome spectacle to see the grizzly hag seated in her armchair every day, receiving her customers during business hours, and giving them the diabolical advice and aid they sought.

They were mostly married women from the neighbouring country side, eager, for some reason or another, to get rid of husbands who obstinately refused to die in the ordinary course of nature; but who by Thekla’s friendly offices might be made amenable to the resources of art. These wretches paid the old gipsy a fee of from 50 to 100 florins for each bottle of poison they bought, and were duly instructed by her in the safest methods of its “exhibition.”

Thekla Popov’s clients were, however, not always married women. Sometimes she had dealing with young girls who quarrelled with their sweethearts, and who, from jealousy or rage, had determined to kill them. This woman’s terrible trade prospered amazingly for two years. She excited no suspicion because the drugs she administered acted slowly, though surely, and in their effect simulated the symptoms of disease. Even now that the bodies of some of her victims have been exhumed they show no signs of poisoning, though the stomachs are eaten away.

The first case that set people on the alert was that of one Jocza Kukin [presumably the more correct spelling, rather than "Kudin"], a rich peasant, who died at Melencze two months ago. Ugly rumours about his death were spread, and the gossips whispered mysterious hints of foul play. There was in consequence an inquest; but the most careful post-mortem examination failed to reveal any traces of poisoning in his case. The whole story was slipping out of the memories of the villagers when suddenly a dreadful revelation was made. A gipsy girl, the daughter of old Thekla Popov, came before the court at Gross Bedskerek, and horrified it by the tale she had to tell. She confessed that she gave the wife of Jocza Kukin a bottle of some red liquid poison prepared by her mother. She did this by her mother’s instructions. Having had a quarrel with her respected parent over some property, she determined to betray her. Thekla Popov’s daughter further declared that she actually saw Kudin’s [sic] wife pour this poison into his coffee, and that she told her mother what she knew and had seen. To this the old gipsy replied, “ One day I will poison you also, unless you hold your tongue.”

Of course, this statement caused Thekla Popov and the widow of Kukin to be arrested. They, however, denied the charge brought against them. Oddly enough, the judge, by a clever ruse not quite in keeping with English, notions of fair play to accused prisoners,  managed to overhear the two women talking the affair over in gaol. Amongst other things he overheard was Kudin’s [sic] widow [Draga Kukin] saying to her accomplice, “Well, I am young and pretty. He was old and ugly. Why should he not die?” The judge after that had little doubt that the prisoners were guilty. They were therefore put on their trial, and the clue thus unexpectedly placed in the hands of the authorities was actively followed up. Strange discoveries were soon made, showing that from the woman Thekla Popov as a centre, a vast and complex ramification of crime extended far and wide throughout the community. The trial has been deferred for several weeks, so that the bodies of men supposed to have been murdered by their wives may be exhumed and subjected to post-mortem examination.

EXCERPT (Article 2 of 5; from long article on poisonings):

One would think that such horrible criminality as the wholesale poisoning of innocent people belonged wholly to Pagan times; but, unfortunately, the annals of toxicology, down to our days, are replete with histories of indiscriminate poisoning. The latest of these tragedies is reported to have occurred in Hungary, where the Assize Court of Grossbeckskerek is about to try a hideous, but, unfortunately, by no means unprecedented case of poisoning en masse. It is stated that no fewer than 80 women of the Servo-Magyar village of Melencie are accused of having poisoned their husbands and other near relatives, and that they procured the deleterious stuff from two professionals fortune-tellers, Sophia Ivanovitch and Anna Minity, who drove a regular trade in noxious drugs, and earned considerable sums of money thereby.

Suspicion was first directed toward them by the evidence of a beautiful young woman named Draga Kukin, who, so long ago as 1882, killed her husband by poison, but who, being overtaken by remorse, gave herself up to the judicial authorities. The two fortune-tellers were arrested, but they have since died in prison, and the difficulties of gathering a sufficient body of evidence have caused the examination of this shocking case to drag its slow length over a period of nearly seven years.

At Gross Bedskerek, South Hungary, the trial commenced of Thekla Popov, a peasant woman, and over a hundred accomplices, charged with poisoning their husbands. The guilt of the prisoners said to have been already proved in thirty-five cases, and in thirty more strongly suspected.

FULL TEXT (Article 4 of 5): Insurance companies, it is well known, as a rule will not insure wives for the benefit of their husbands, since wife-murder in various forms is so often resorted to, even in the absence of any such pecuniary stimulus. Not long since, however, we were startled by a despatch in our morning papers to the effect that over one hundred husbands in Hungary had been successfully, not to say happily, despatched by their enterprising wives. The Vienna correspondent of the London Standard (according to the Tribune) gives the details of this most remarkable of crimes.

In the little village of Melencze lived a certain old hag, Thekla Popov, who had reached the scriptural limit of three score and ten years, but who lacked the virtues pertaining either to her age or her sex. She figured as the "Married Woman's Best Friend," and justified her title to those who wished to complete the cycle of maid and wife by a speedy widowhood. She concocted her poisons and conducted her business so skilfully that for a long time no suspicion fell upon her in spite of the fact that her fame as a vendor of such elixirs must have been known to many a voluble woman, and the drugs must have been used again and again in most cases, lest a too sudden despatch of the unfortunate victims should betray her. Wronged maidens sometimes obtained her medicines, but wives, especially if young and comely, were her chief and most desired patrons. The cost, in view of the risk, was very moderate. Twenty-five to fifty dollars was the usual fee. On the average, husbands, even with an active market, only fetched thirty-five dollars. Her daughter, who was her only confederate, finally quarrelled with her and exposed her horrible practices, and the exhumation of the bodies of her victims confirmed the story. So far as we know, the practices of this Hungarian gypsy have been confined to her own village.


FULL TEXT (Article 5 of 5) (Translated from Gernan): From Gross-Beckskeret it is reported: The local court cases are currently being investigated in an affair in which about one hundred people are likely to be charged are being. In the village of Melencze there lived a quack called Thekla Popov, who used various animal substances and herbs to brew a poisonous liquid, which when imbibed several times, would slowly but surely kill. This Popov had traveled throughout the region and had emissaries everywhere who would seek out homes in which their was conflict between spouses.Where they found such houses, they nestled themselves there, and sold them the poisoned brew so that the wives could overcome their husbands, which in every case led to the death of the unfortunate spouse. Thirty-five women were convicted by the examining magistrate of homicide; against another thirty women is  reasonable suspicion of the same crime. The criminal activity was brought to attention by the poisoner's own daughter. 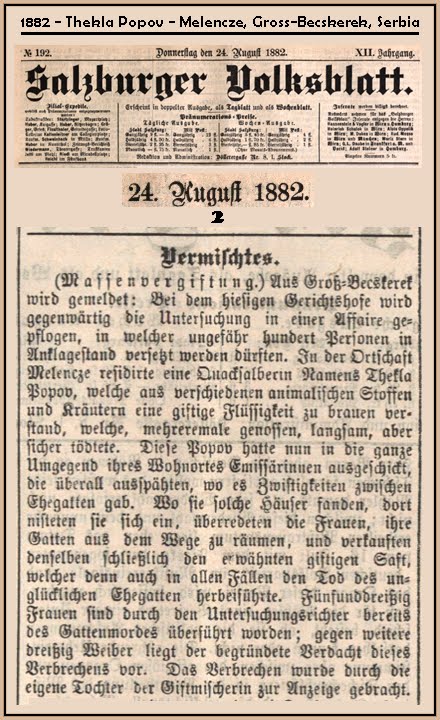 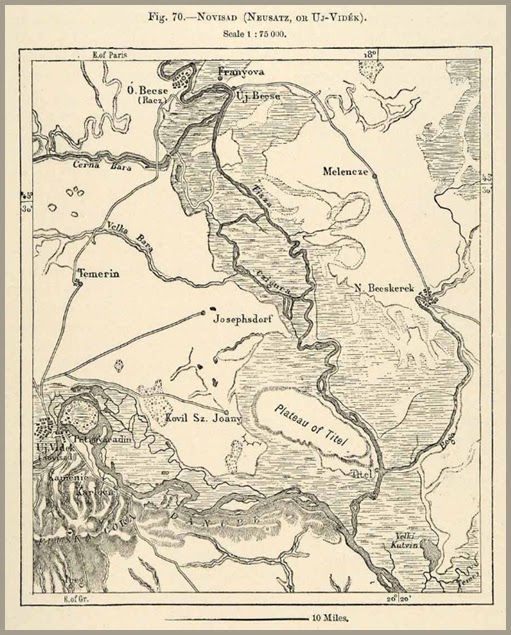 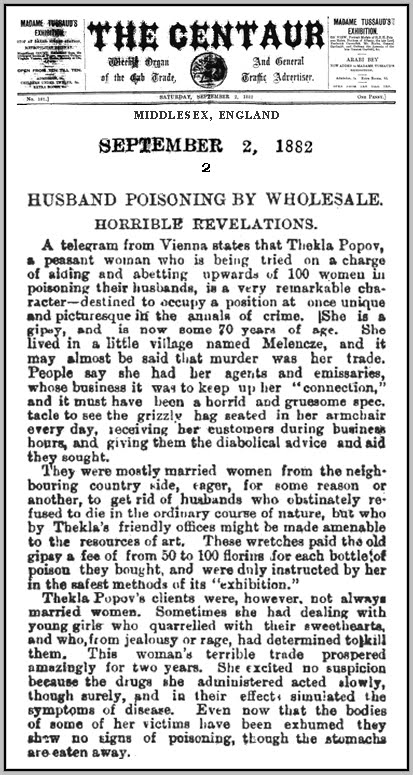