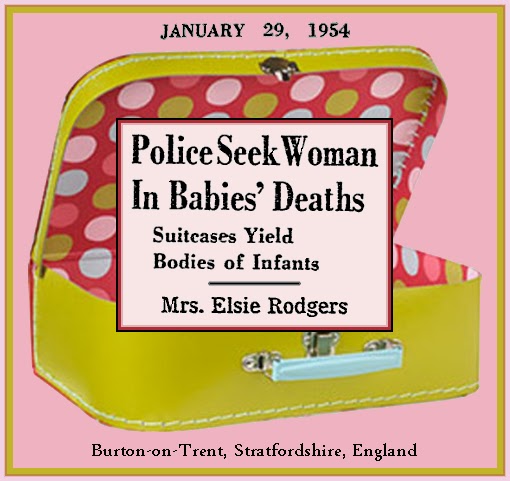 Mrs. Elsie Rodgers, 37, the missing wife of a Leeds street car motorman, was the object of a nation-wide hunt. Police gave no hint of her possible connection with the case.

The bodies of the babies, nylon knotted around their necks and each in a separate suitcase, were found in the store room of a pet shop at Burton-On-Trent.

A clerk said a woman left the suitcases several months ago for “safekeeping.”

Ages of the babies varied from a few weeks to almost a year. the mummified state of one indicated it had died more than two years ago. One was a boy and the other a girl. Sex of the third was not determined.

The thrice-wed estranged wife of a Leeds street car motorman was taken to a hospital. Police have said they think she may be able to help them in their inquiries into the infants’ deaths. The babies were in separate suitcases. Nylon stockings were tied around their necks. Each was several months old.

A girl clerk in a pet shop at Burton-on-Trent said a woman left the three suitcases in the shop several months ago “for safe-keeping.” A pathologist said one was a boy and another a girl. The sex of the third was not determined.