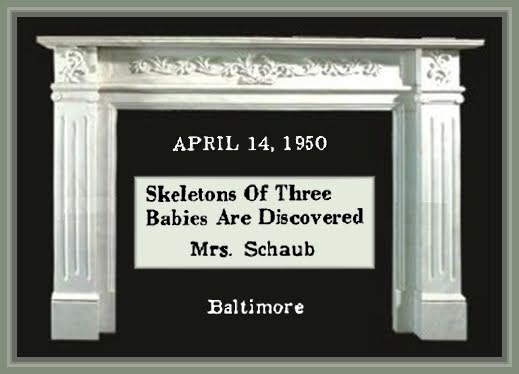 FULL TEXT: Baltimore, April 13 – Police today added a suicide to the grim story they are unfolding from the discovery of the skeleton remains of three babies, apparently sealed up some 25 years ago.

The skeletons were found wrapped in three bundles in the boarded-up fireplace of an old Baltimore row house last night. Two of the remains were wrapped in newspapers dated 1921 and 1923.

She had tried several times before that to commit suicide, he said.

She often complained of being in poor health, he said.

Schaub related that his real mother died when he was young and that his father, who died three years ago, remarried about 1915.

Three sons were born of this second marriage, he added.

The skeletons were found by the present occupants of the house, Mrs. Marie Plage, and her uncle, Fred Scheldergyer. She opened the sealed fireplace after her ring fell through a crack in the mantel.

Meanwhile, as police probed the past, state medical men examined the bones in an effort to learn what caused the death of the infants and their approximate age.