FULL TEXT (Article 2 of 3): St. Helens, Ore., Oct. 27 – A twice-married mother of two children, quietly but firmly defending her innocence, was held in jail at Portland without bail today while officers investigated three deaths – those of two stepdaughters and the woman’s first husband.

The prisoner, 35-year-old Agnes Joan Ledford, was arrested last night on an information filed by Sheriff M. R. Calhoun, accusing her of first-degree murder in the deaths of Dorothy, 15, and Ruth Ledford, 13, who had been all but forgotten publicly as the girls who died because they like berries.

No charge had been filed concerning the third death, that of John Matson, who died in 1932 as the husband of Mrs. Ledford, now the wife of George Ledford, a Columbia county grocer.

District Attorney David Bennett, claiming a purchase of poison on the alleged pretense of using it to kill earwigs had been traced to Mrs. Ledford, asserted the lethal mixture had been found in her home and that the equivalent of an amount missing was found in the children’s stomachs.

The prosecutor asserted that Mrs. Ledford was named beneficiary in an insurance policy for the children, who were by George Ledford and his first wife, now Mrs. Pearl Turner, Los Angeles.

“I didn’t do it: I couldn’t have done such a thing,” Mrs. Ledford told a reporter in Portland, where she was taken because there were no jail facilities here for women. Behind her she left two infant boys, one six months and the other 21 months, the children of herself and George Ledford.

Ruth and Dorothy died last month within two days of each other. At the time, sheriff’s officers expressed the belief the children had been poisoned by eating berries in a patch on to which a poisonous spray from a near-by orchard had been blown by wind.

In the investigation, Bennett disclosed that the body of Matson, whose death was ascribed to acute gastritis, had been exhumed sand the prosecutor asserted a trace of poison had been found.

Mrs. Ledford was accused of administering poison to her two step-daughters, Ruth, 13, and Dorothy, 15, last fall, but was tried only for Ruth's death.

The state charged that Mrs. Ledford believed the children's deaths would force payment of $1000 in insurance. The defense contended the children were poisoned by spray blown on berries from a nearby potato field. 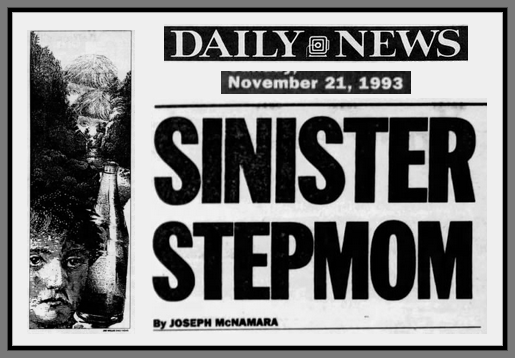 FULL TEXT: UNDER A SCORCHING sun Dorothy Ledford, 15, and her sister Ruth, 13, trudged a dusty ribbon of road from a shopping trip in Helens, Ore., to their stepmother's 40-acre bean ranch 5 miles out of town.

“Let's sit,” suggested Ruth as she dropped beside a blackberry patch, popping the ripe fruit into her mouth.

Dorothy did likewise, and the berries did help that hot afternoon of Aug. 27, 1937.

For a year the girls had lived with their father, George W. Ledford. an itinerant preacher turned clerk, and his second wife, slim brunette Agnes Jensen Matson. Three other children were with their mother in San Diego.

In fact, husky, blond Ruth and equally strong Dorothy had come north to Oregon after Ledford fell down on his support payments and the mother complained she could, not pay expenses for all five children.

The teens helped about the ranch, which was bought by Agnes with money left her by her first husband, John Matson. He died in 1932.

Ledford married the well-to-do widow from Brownsville, Ore., early in 1935, when she was 35. He lagged in his support payments alter Agnes had given birth to twin boys.

Ruth and Dorothy seemed fond of their stepmother, and she of them.

That evening the girls complained of illness and a doctor, unappreciative after being summoned at midnight, ordered a laxative. Three days later when the two again became ill. along with Agnes' mother, Mary Jansen, who lived with them, the doctor had the well water tested for typhoid. The test was negative.”

Several days after that all three seemed recovered. That evening they had a dinner guest, fellow church member Bessie Scovel. About midnight Dorothy and Ruth awoke writhing in pain. The doctor, summoned again, ordered both to a hospital. They died within hours.

An autopsy showed that some chemical had dried the tissues of the girls' vital organs. Pathologists ran tests that revealed the agent was arsenic.

M. R. Calhoun, sheriff of Columbia County, asked the Ledfords what the girls had done the first time they became sick. He was told they had shopped in St. Helens and stopped to eat blackberries alongside Clyde Watson's fence. Watson was asked by Capt. Clyde A. Warren, a Portland criminologist brought into the case, what he had been spraying on his fields.

“I wouldn't be using anything that would kill people,” the angered farmer told Warren. “Lime and sulphur . . . and they never killed anybody.”

In fact, tests on the berries showed them benign.

The mother of Dorothy and Ruth came from San Diego for the funeral. With her was her brother, Lloyd F. Dayton. After the service Dayton went to Sheriff Calhoun. He said the Ledfords worked the teens in the bean patch for a penny a pound and then took that back for their keep. He hinted darkly that the sheriff better investigate the deaths, but he declined to be specific.

Warren and District Attorney David Bennett went to the Ledford farm. The family was away. All the sleuths found of interest was a half-filled pound package of white powder on a shelf in the root cellar. It bore the imprint. Plaza Drugstore, St. Helens.

The lawmen realized the girls' first attack predated the Sept. 4 purchase date, but that the fatal seizure occurred that very day.

“Why, yes, I bought the stuff to kill earwigs that damaged my tulip bulbs last spring,” she said. “When the girls got sick 1 forgot about it.”

“You mean you didn't open the package?” Calhoun pressed.

“No, but mother went to the cellar for butter and knocked the package off the shelf and it broke open,” Agnes explained. “I swept it up and threw it down the drain.”

The sheriff did find the powder in cracks in the floorboards, and evidence of it also was found in the drains. But Calhoun played a trump card.

“We think someone in this house is responsible for the deaths of your stepchildren.” he said.

“That's impossible,” Agnes gasped. “Mother and George and I loved those kids as if they were our own.” she declared. She insisted that tests be run on samples of all food- proved negative.

The DA told his probers that the pathologists said bleeding spots were found in the girls' stomachs, which meant they died of one massive dose of the poison, rather than smaller doses over time.”

Let's find out what was eaten that night they got sick, Bennett said.

Scovel, the Ledfords' guest, said that everybody ate everything that night, the girls in lesser amounts since they did not feel well. Except for some soda pop. Only the girls drank the soda pop. They shared one bottle, Scovel said.

Now lawmen got an interesting report. Microscopic examination of the arsenic box showed not the slightest dent or scratch, as have been the case had it fallen onto the floor. Further, the box had not burst open in a fall it had been cut open with a knife, sleuths reported.

Calhoun told DA Bennett about rumors he had heard, gossip from Brownsville. John Matson had died after 16 years of pinchpenny unhappiness in marriage, it was said by the townsfolk. Apparently healthy he died suddenly of “acute gastritis.” Widow Agnes inherited all the pinched pennies.

One other piece of evidence appeared. A routine form of an insurance company” noted it was paying “Agnes Ledford $1,000 for the deaths of her daughters.”

All that remained was to implicate George Ledford or exonerate him in the slayings of his two daughters. Asked about working the girls so hard and insuring them against death, Ledford said. “Those were Agnes' ideas.”

Charged with two counts of murder. Agnes Ledford went on trial before Circuit Judge Howard K. Zimmerman and a jury on March 10, 1938.

Prosecutor Bennett ignored the early illnesses and zinged in on the agonies produced by the massive dose of arsenic, which he told the jury was administered in the soda pop at the victims' last meal.

The panel deliberated eight hours before convicting Agnes Ledford of murder in the first degree. But the panel tempered their finding with mercy, sparing the woman the death penalty.

Judge Zimmerman sentenced her to life in prison.

“I didn't do it.” the anguished woman shrieked as she was led by matrons out of the courtroom to the van taking her to the correctional facility.

According to the Oregon State Corrections Department, Agnes Ledford was released on parole in 1968. 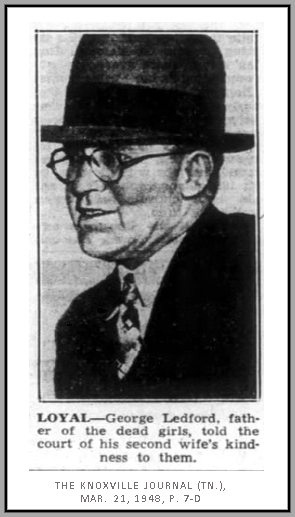 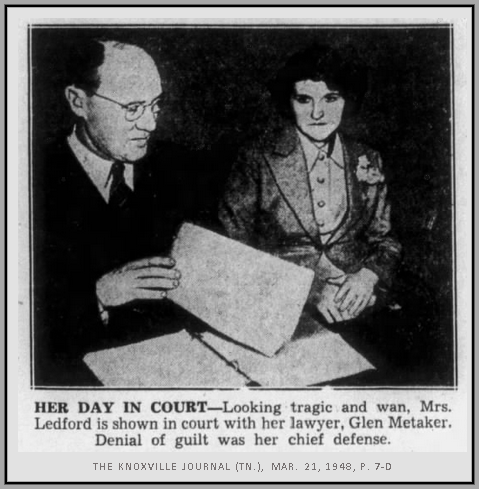 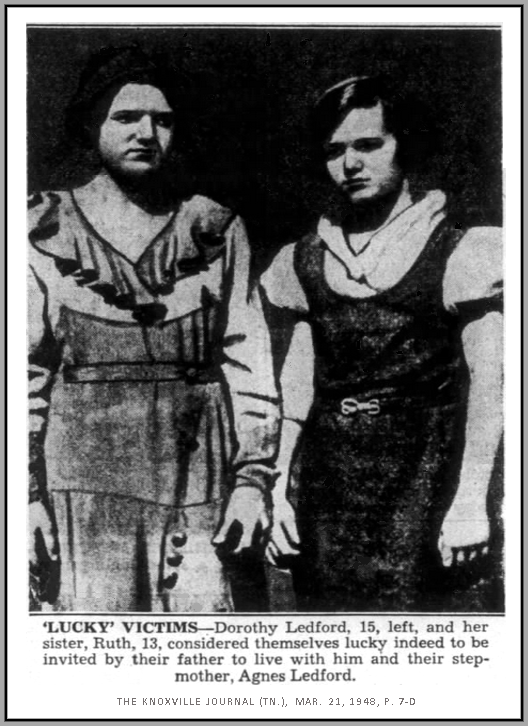 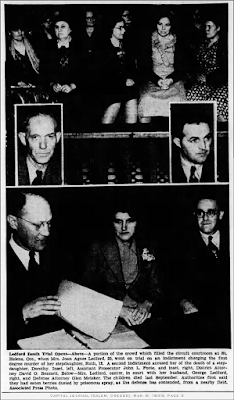 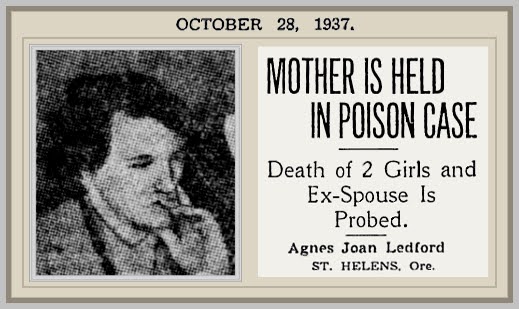 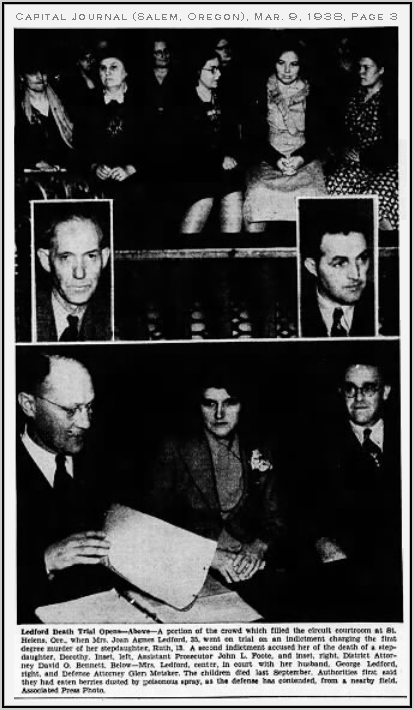 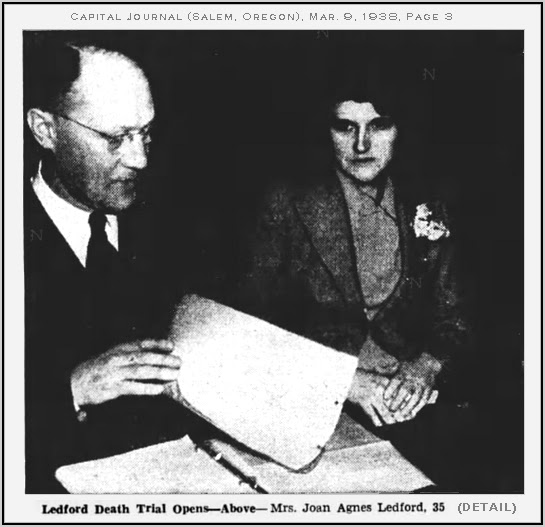 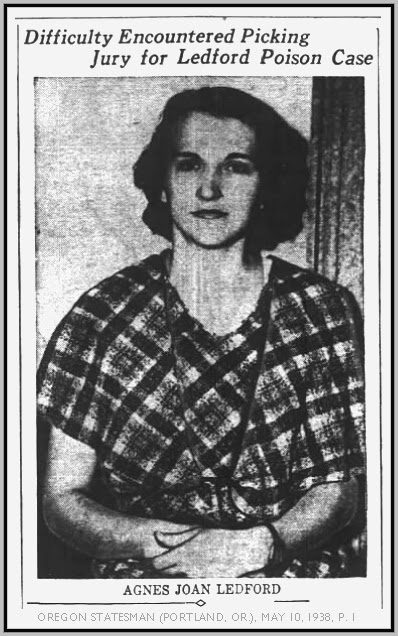