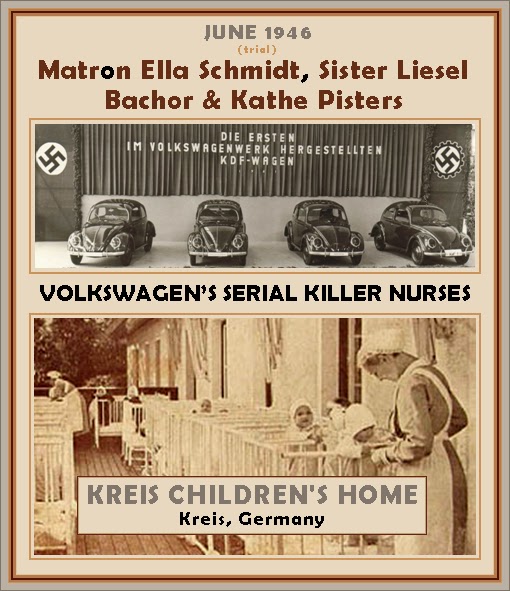 EXCERPTS from reports on the 1946 trial:

Kreis Children's Home was established by the Volkswagenwerk Directorate to accommodate the infant children of foreign workers in the factory and on farms in the neighbouring Kreis. It was clearly proved at the trial that Dr. Korbel, together with Matron Schmidt and Sister Bachor, were wilfully neglectful in their duties, and that their wilful neglect was the direct cause of the death of between 350 and 400 Polish and Russian children. Matron Schmidt was also sentenced to death by the court, but this sentence was commuted by the confirming officer to one of imprisonment for life. Sister Bachor was sentenced to five years imprisonment.

The children at the Kinderheim all experienced the same sequence of symptoms: vomiting, diarrhea, emaciation, distended bluish colored abdomens, and, finally, death. When Allied investigators exhumed some of the children's bodies, they found evidence of extreme malnutrition, and bloated and distended abdomens. One Kinderheim nurse described the children as "rotting away with each passing day.".

Even though illness in the nursery had reached epidemic proportions, the staff made no effort to stop the spread of infection. There were several children to a bed, yet the children's diapers, clothes and bed linens were left filthy and unchanged for hours. The odor in the nursery was reported to be sickening. The windows in the nursery were left open during the winter. Although children were constantly sick with infections and sores, no effort was made to isolate the sick children from the healthy. The nurses did not bathe the children in fresh bath water; often ten to fifteen children, both sick and healthy, were bathed in the same water and dried with the same towel.

In addition to the disease and infection caused by unsanitary conditions in the nursery, the children suffered from starvation. A Polish nurse testified the children were so skinny "you could notice the bones. The mothers who wanted to breast feed were often thrown out by the German nurses who claimed they had "stolen" food or supplies. The supervising nurse at the Kinderheim, Ella Schmidt, reportedly beat mothers who came to visit their children after hours or without a police permit.

[Source: “Statement for the Press on the Trial of Dr. Hans Korbel & Others, Medical Officer In Charge and Staff at the Ruhen Baby Farm.)] Links: Part 1; Part 2