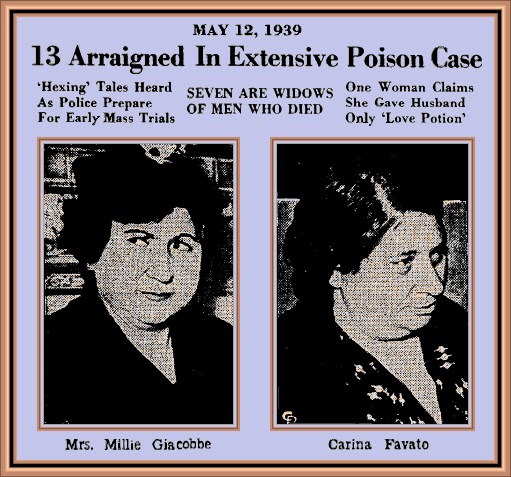 FULL TEXT: Philadelphia, May 11. – Tales of “hexing,” the “evil eye” and “magic love potions” were dramatically mixed with tearful, professions of innocence as men and women were hauled before police judges in swift preparations today for mass trials of the dozens accused in the eastern states insurance murder plots.

In all, 13 were held for trial, the grand jury, further hearing or extradition. Seven are widows of men whose deaths investigators have laid to the far-flung ring that, operated in eastern Pennsylvania and extended into New Jersey, New, York and Delaware.

“Up to 100” is the latest official estimate of the deaths that might be traced. to the plotters over the last ten years. Some investigators, however, lave taken a “name your own figure” attitude on the number of victims of poison, drowning, head-breaking and automobile “accidents.”

Evidence of the ring’s workings, Assistant District Attorney Vincent P. McDevitt said, disclosed that some wives gave the ring a flat fee or percentage of insurance to kill their husbands; others paid for a poison the ring called ‘witches brew” and administered it themselves.

Then, in some cases, the poisoners were poisoned to “shut their mouths,” detectives said.

Those held today: Gaetano, Cicnati, Paul Petrillo and Morris Bolber to the grand jury as accessories to murder. Samuel Crispino for extradition to New Jersey on charges of conspiracy in a drowning.

Mrs. Anna Arena for the grand jury on charges of conspiracy in a drowning.

Mrs. Millie Giacobbe and Mr. Rose Davis of the grand-jury, on charges of murder.

Mrs. Rose V. Smigel Shenkman for further-hearing on a charge of suspicion of murder.

Mrs. Agnes Mandiuk and Mrs. Josephine Romualdo for trial on charges of homicide.

Mrs. Marie Wolosyn for further hearing on charges of conspiracy, in the automobile “accident” death of her husband.

Cesare Valenti for trial on charges of murder.

David Brandt for further hearing on charges of conspiracy, to murder.

Most of them had been held at previous hearings.

Holding Mrs. Mandiuk and Mrs. Romauldo, 51, mother of two, in the deaths of their husbands, Magistrate Nathan Beifel declared:

“I’ll let the courts decide whether you were a pawn in the hands of these vicious murders or whether you yourselves were to blame.” 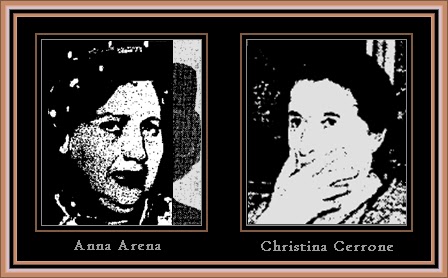 Her sallow face stained by tears, frail Mrs. Romauldo had protested her innocence. She only gave her husband “love powders” to regain his affection she contended.

The potion was suggested by Mrs. Carina Favato who halted her trial for murder by pleading guilty to three murders, Mrs. Romauldo testified.

In Mrs. Mandiuk’s case, Police Captain James A. Kelley testified she had made a statement that her husband, a baker, had been poisoned. Mrs. Wolosyn was held for further hearing because McDevitt said he had evidence that the death in an automobile “accident” was the work of the ring.

Two of the men bound over to court were described by detectives as ring leaders.

One, Cesare Valenti, huge, wrinkled, gray-haired immigrant Italian who was found in a New York prison awaiting deportation several weeks ago, almost collapsed as he was held on murder charges.

The other described as a leader of the ring was Morris Bolder and known to police as “Louie, the Rabbi,” a practitioner of the black arts and a “director” of the “corporation” that killed for cash.

At the arraignment of Brandt, young, natty typewriter salesman and former student of veterinary medicine, whose hearing was continued, Assistant District Attorney Vincent P. McDevitt said he ultimately will be held for several murders.

To keep them from dragging through several days, the hearings were held before three magistrates.

“Events have moved so fast during the last, 48- hours that it has been difficult to keep abreast of the “ramifications of this iniquitous murder ring,” said Prosecutor McDevitt.

He plans to begin the mass trials in 11 days. One man, Herman Petrillo, with whom detectives link Valenti and Bolder, has been, convicted of murder, with the death sentence mandatory. 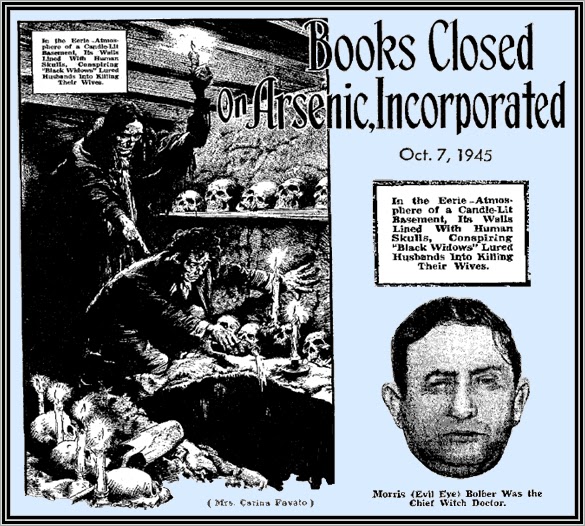 FULL TEXT (Article 2 of 2): The days of devil’s brew in Philadelphia are over and the last chapter is about to be written in a nefarious money-making conspiracy that, cost. the lives of at least 100 men and women.

Accused, of being the last of an unholy aggregation that prospered on. the gullibility of superstitious folk, Mrs. Josephine Sadita — somber, sick and sadly dressed—surrendered recently in Philadelphia’s City Hall and was sent to jail without bail to await trial on a murder charge.

Mrs. Sadita is alleged to have been associated with the notorious band that between 1932 and 1938 fed “witch potions,” “miracle water” and “magic cures” to unsuspecting victims. All the concoctions were compounded of arsenic. The innocents died and the killers collected their insurance. Since then two have been executed for murder, 12 are serving life terms and seven others received less severe sentences.

The gang operated under four leaders. There were debonair Herman Petrillo, a former spaghetti salesman, and his dapper cousin, Paul, whose tailoring establishment was metamorphosed into a human butcher shop. Then there were natty Dr. Horace D. Perlman, an obstetrician who turned from bringing life to the world to taking it away, and Morris (Evil Eye) Bolber, chief witch doctor, who said he learned the black arts in the Orient.

The ringleaders, enlisting the services of “black widows”—disgruntled women who gave the spider’s sting of death to men—embroidered their skulduggery in mystical trappings.

Salvatore Sortino, 38, a huckster who was one of Bolber’s honor students and pushed a cripple into the Schuylkill River for his $15,000 insurance, told at his trial how the Evil Eye, led him to a cemetery and directed him to walk around the graves with outstretched hands. Then he had to carry an egg in his armpit nine days until “a little devil” was hatched. Bolber said that was a lot of poppycock but he admitted he uttered incantations over a pair of Sortino’s socks “to bring Sortino luck.” Sortino got life.

Dominick Cassetti, a pants presser, convicted of killing his wife, Jennie, contended he was under the spell of “Black Widow” Providenza Miccluchi. She lured him to the candle-lit basement of her home, he said, where the walls were lined with eerie skulls, and in that grisly atmosphere told him to bury a dime in a grave, mix some of the soil with white “charm powder” and feed it to his wife.

The “charm provider” The was arsenic. Mrs. Cassetti died. Cassetti collected $850 insurance, of which he paid $150 to Mrs. Micchichi. Both got life.

Love was an important circumstance, in the functions of the band. Whenever somebody was enamored of somebody else’s husband or wife, the person who was in the way was removed with the quick-acting poison. Herman Petrillo, who confessed he had dispatched 34 men and women to death, supplied the means.

There was Mrs. Carina Favato, who pined for Rafaelo Polselli, errand boy for the arsenic ring. But her common-law husband, Charles Ingrao, was an obstacle. They eliminated him by pouring “miracle water” in his coffee. Nine clays later, just to make things easier, they gave Ingrao’s son, Philip, a lethal dose. The two deaths netted them $14,238.98.

Emidio Mucelli heard about Mrs. Favato’s magic power. He was infatuated with Susie Di Martino, who happened to have a husband, Giuseppe. So he called on Mrs. Favato. “Susie,” he said, “is crazy for me and I am crazy for her. I want a magic potion that will make Di Martino stop loving Susie.’“

He got it for $300, and, sure enough, Di Martino soon stopped loving Susie.

After Di Martino’s death, Mrs. Josephine Romualdo visited Mrs. Favato. She wanted a “love potion,” she said, to make her husband, Antonio, a lamplighter, stop beating her. He stopped because he died of arsenic and she collected $7,000 in insurance. 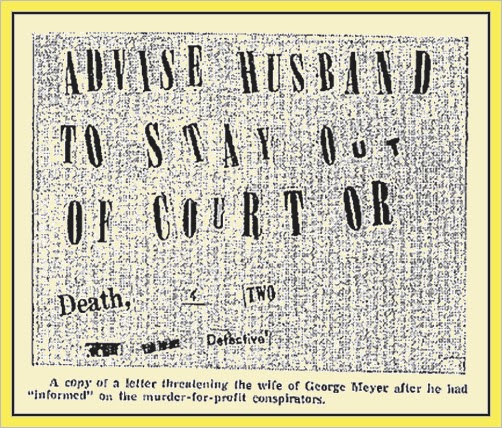 Business became so lucrative for Mrs. Favato that she set up Polselli in the undertaking profession. That provided additional income for burial of the murder victims. Now both are serving life terms.

Mrs. Sadita, last of the accused, was under bail of, $2,500 in 1938 on a charge of practicing medicine without a license when she disappeared. For seven years she hid out on the farm in Virginia until she became ill and decided to give up.

The original complaint was made against her by Alphonse De Jesse, who went to her for treatment of stomach ulcers.

“She wore a dirty black magic coat,” he said. “Before she would do anything she made me turn over all the money I had—$15G. Then she put two East Indian rabbit skins around my stomach and muttered, ‘Aska wanna jinksa hoo.’

“After nine days the skins began to smell pretty bad and I called her in again. She made me give her $112 more and gave me some medicine which made me feel worse.” Mrs. Grace Giovanetti said that later on she went to Mrs. Sadita seeking a “magic cure” for Pietro Pirolli. He died. She collected $3,500 insurance and when Pirolli’s body was exhumed by the state enough arsenic was found in his vital organs to kill a dozen men.

Mrs. Giovanetti was sentenced to death but won a new trial and a term of five years. Mrs. Sadita still has to stand trial for the slaying. 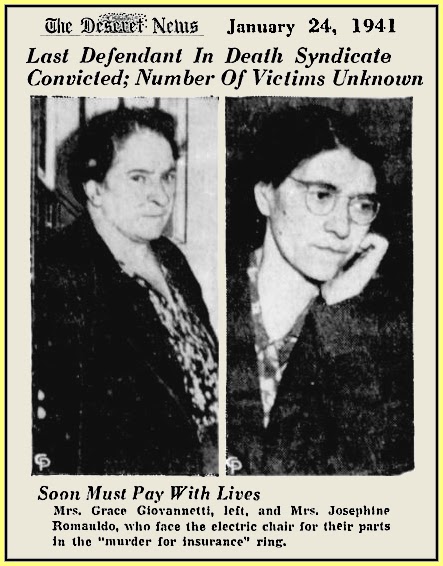 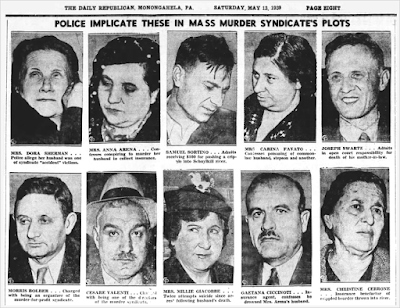 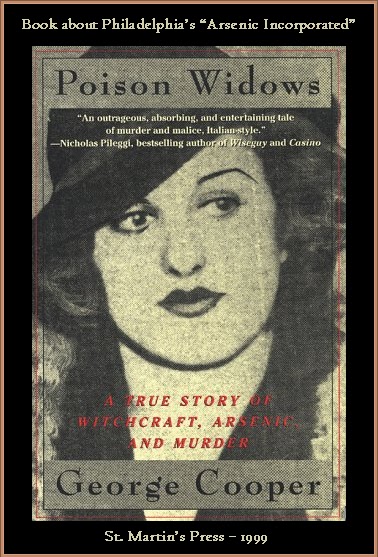