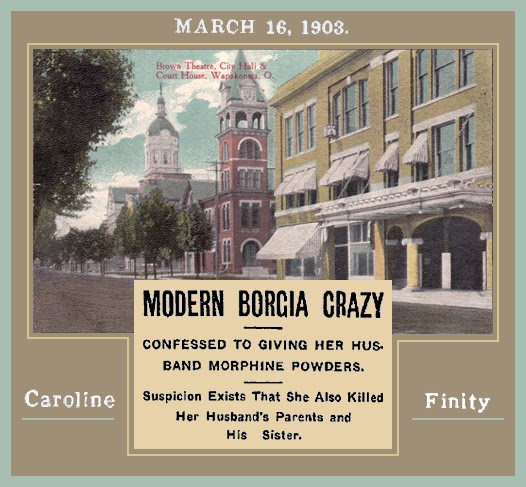 FULL TEXT (Article 1 of 2): Wapakoneta, O., March 10.— Last Tuesday Daniel Finity, a wealthy retired farmer, died suddenly. Coroner Sibert reported that he came to his death by poisoning from morphine administered by his wife. Mrs. Finity confessed that she had bought the morphine powders and had given them to her husband. The attending physician also testified that she had tried to smother her husband while he was under the influence of opiates. Mrs. Finity was adjudged insane and has been taken to the state hospital at Toledo. Mrs. Finity is morally irresponsible. The examining physicians, Drs. Hunter and Nichols, testified that she had an inordinate and uncontrollable desire to purchase poison, which she would give to those with whom she came in contact, and that she had no regard whatever for human life. She had been confined in an asylum several times. The physicians testified that her insanity, in addition to being hereditary, was brought on in violent form by the excessive use of alcohol and narcotics.

Her husband recently sold a large farm and after paying a number of debts had over $35,000 left. This money is missing. All of Finity’s property was inherited from the estate of his parents. A short time after the marriage Daniel Finity died suspicious under suspicious circumstances and shortly afterwards was followed by a daughter. Shortly after the deaths of the old couple and their daughter there were strange rumors afloat, but there was no suspicion of their poisoning been poisoned until after Daniel Finity’s death. Now it is said the symptoms were those of arsenic poisoning. When taken to the Toledo asylum. Mrs. Finity was in a sort of comatose condition and could not make intelligent statements.

FULL TEXT (Article 2 of 2): Wapakaneta, O.. March 16. — Mrs. Caroline Finity, whose husband died suddenly Wednesday under very suspicious circumstances, was declared insane and taken to the state hospital at Toledo. This is her second incarceration in the asylum. She admitted that she administered morphine powders to her husband before his death and made no effort to save him. Two physicians testified that she is a dangerous person of weak mind; has been making demands for poisonous drugs to put people to sleep, and that she has no regard for the life of any one. 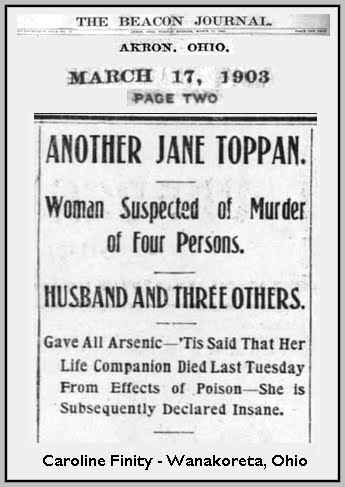