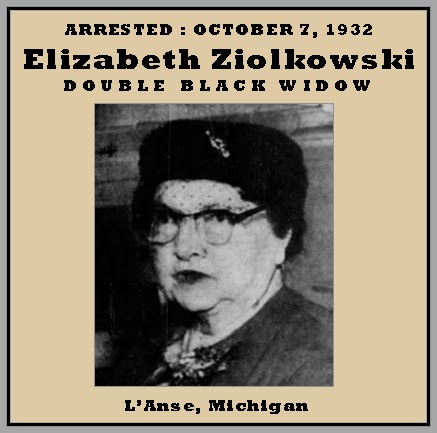 NOTE: In this case, a murdered husband is accused by the killer wife – but only after two previous sworn statements that made no reference to the accusation – that the man was a pedophile (“indecent relations” with two young girls).

FULL TEXT (Article 1 of 3): L'Anse, Mich., Oct. 7 – Widow who claims, officers so said, that she gave her late husband poison at his request to relieve severe stomach pains, was held for trial today on a charge of first degree murder.

She is Mrs. Elizabeth Ziolkowski, 60, half breed Indian.

She was bound over for trial yesterday after she had waived examination.

Her statement which Sheriff William Netti, of Baraga county, and Fred Ennis, state police detective, said was tantamount to a confession that she was responsible for the death of her husband, John Ziolkowski, 35, was made after her arraignment.

Ziolkowski died on September 4. Officers said they also would investigate the death in 1928 of the woman's second husband, John Boston. They said they were told the woman mixed him a hot drink shortly before death.

FULL TEXT (Article 2 of 3): Mrs. Elizabeth Ziolkowski, who has been held in the Baraga county jail since last October on charges of poisoning her husband, John, who died last Labor Day, yesterday told authorities she was telling she was willing to plead guilty, and will be arraigned in the circuit court at L’Anse before Judge Stone 9 o’clock this morning. Prosecuting Attorney Harry R. Corgan of Baraga county was transacting business in Escanaba yesterday morning when he was notified when he was notified by the Baraga county clerk by long distance telephone that Mrs. Ziolkowski had decided to plead guilty.

The mysterious death  of John Ziolkowski followed a visit he and his wife made with relatives in Fairport, Garden peninsula, about last Aug. 15. Because of illness, they remained in Fairport only a couple days, and returned to their home in Baraga.

In two statements given to Baraga authorities on Oct. 6, Mrs. Ziolkowsi said that her husband asked her to make him a drink of some arsenic of lead that was stored in a paper bag on a shelf in their home. She explained in her confession that her husband too the drink to relieve the pains in his stomach, but that her cautioned her against telling anyone about the “medicine.” She also stated in the first two statements that she loved her husband.

In her third signed statement, dated Nov. 25, however, Mrs. Ziololkowski confessed: “I gave my husband this poison because I figured by getting rid of him I would also be rid of the other Ziololkowski’s.”

She said she was disgusted with her husband because of his actions. She charged in her third statement that that he had had indecent relations with her granddaughter and another small girl, and that while she went on a visit to New York he had been unfaithful to her and had contacted a serious social disease. She also complained that his relatives were always interfering with her affairs, and that her husband always sided with them.

Following her last confession, Mrs. Ziolkowski was arraigned in circuit court at L’Anse at the December term, but stood mute. Trial of her case was set for the next term.

Meanwhile, authorities investigated the death of John Boston, a former husband of Mrs. Ziolkowski, who died four years ago. Boston’s body was exhumed in November, and an analysis of his internal organs by the state laboratory at Lansing revealed a large quantity of arsenic. At the time of Boston’s death, the woman explained that Boston had come in from a fishing trip, complaining of being ill. She said she gave him a “hot drink,” and he died shortly afterward. The physician who signed the certificate had presumed that Boston had died of heart disease.

It was understood that Mrs. Ziolkowski at one time lived at Cedar River in Menominee county. She is a woman almost sixty years of age, while her last husband was in his thirties.

FULL TEXT (Article 3 of 3): Lansing, Mich. – A little old lady with bright dark eyes and an unwrinkled face told the men on Michigan’s State Parole Board why she wants to leave the prison that has been her home since 1933.

Elizabeth Ziolkowski, 85, is the coldest of some 400 women prisoners at the Detrot House of Correction. She was sentenced to life imprisonment 28 years ago after a jury convicted her of poisoning her third husband with arsenic.

The sentencing judge is a statement, said it was thought that she murdered her spouse to collect his insurance. The judge, now dead, said there were indications that she killed her second husband the same way although she never was brought to trial for his death.

Mrs. Ziolkowski, a plump, pleasant-faced grandmother, said at her trial that she was innocent. She still says so.

She told her story to the parole board Thursday in hopes that Gov. John B. Swainson will commute her sentence, making her eligible for parole.

John Ziolkowski, 41 when he died, bought lead arsenic powder and used it in an attempt to heal sores on his body, she said. Some of it, she said, apparently got into his blood system.

She said her second husband died of a heart attack after eight years of marriage. She and Ziolkowski, an auto plant worker, were married for years. She and her first husband were divorced.

Only a son and daughter of her eight children are still living. 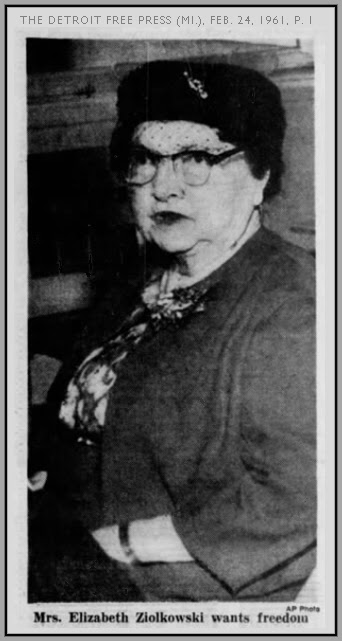 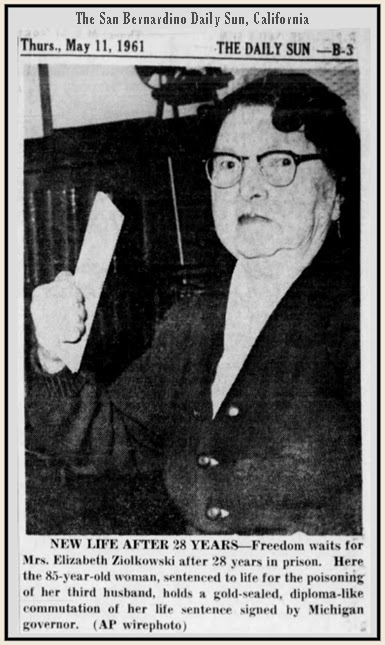 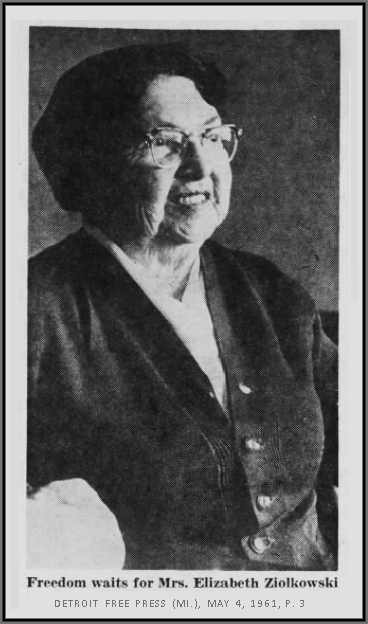