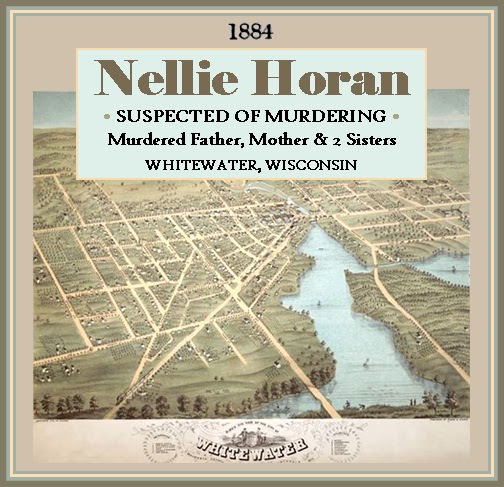 FULL TEXT (Article 1 of 3): Whitewater, Dec. 6. – One of the most startling criminal cases in the history of Wisconsin may be developed her within the next few days. About four years ago the Horan family removed to Whitewater from Koshkonorg, a little place six miles from here, about a year afterwards, the mother died suddenly, six weeks later the father expired, and a week after his demise one of the daughters breathed her last. The matter excited considerable comment at the time, but it seems nearer to have been considered suspicious enough to warrant a legal investigation. Now another member, Miss Anna Horan, has died under suspicious circumstances. She was a dressmaker, being in partnership with Miss Wakeman. A few days ago Miss Horan complained of feeling ill. Monday night at 11 o’clock she awoke in great pain and asked Miss Wakeman to send for her friends. Three physicians were called, but they could not help her, and Tuesday morning she died. An inquest was subsequently held, and so thoroughly did the physicians believe the girl had been poisoned that the contents of the stomach were sent to Prof. Bode, of Milwaukee, for chemical analysis.

The wildest talk is heard on the street, the general opinion being that the girl was poisoned by outside sources. No motive for such a crime can be imagined.

The theory of suicide is not entertained, all of her friends agreeing that such an act was not possible. It is believed that some person has been pursuing the family for years, and that Miss Anna is the fourth victim. Who that person is nobody pretends to say with enough facts to warrant an opinion. Officers are understood to be at work on the case, and should the chemist establish the girl was poisoned, some startling developments nay be expected. The public is greatly mystified.

Miss Horan leaves three sisters, Miss Nellie who, for two years, has worked in The Register office here; Mrs. McCann, of F ort Atkinson, and another, unmarried, who lives at Pierceville.

The coroner’s jury met to-day and heard testimony of physicians, who testified the only cause for her death they could find was poison. None of the organs were diseased. The jury adjourned until next year Saturday, when Prof. Bode, of Milwaukee, well be examined.

[“Four Mysterious Deaths. – Whitewater Excited Over A Supposed Murder. – Four Members of One Family Die Mysteriously at Different Times – Wild Talk, But No Evidence to Fasten the Guilt on Anybody – Officers at Work.” Milwaukee Daily Journal (Wi.), Dec. 6, 1884, p. 1]

FULL TEXT (Article 2 of 3): Elkhorn, Wis., March. 11. – By the acquittal of Miss Nellie Horan to-day ended the most remarkable trial in the criminal history of this State. Anna Horan, who kept a millinery store at Whitewater, Wis., was taken ill on Sunday, Nov. 30, and in spite of all efforts to save her died on the following Wednesday with all the symptoms of poisoning, a fact which was conclusively proved by the post-mortem examination. She was a popular young woman, 30 years old, and her peculiar death revived facts and suspicions long forgotten. Her parents were early settlers in the country and ranked high in the community, her father, Joseph Horan, came to Whitewater in 1880 about $5,000. He was then 78 years old. About three years ago he was suddenly taken sick, and expired during terrible spasms and convulsions. Mrs. Horan had died a short time previous though under no peculiar circumstances. At the old man’s funeral the youngest child, Agnes, fell on the new-made grave in hysterics, and in less than a week was a corpse. The money accumulated by the old couple had been left to the four unmarried daughters, the youngest, Agnes, being given rather the largest share. Her sudden death left the money to the three sisters, Anna, Gertrude, and Nellie taking to typesetting. Anna was a dressmaker. Nov. 30 she was taken sick and sent for Nellie, who procured and administered  to her what was supposed  to be an opium powder. Within a few hours, after terrible suffering, Anna was dead. A few days before a little girl had seen Nellie Horan buying strychnine at a drug store, and when this fact became known the funeral preparations were stopped. Strychnine was found in the stomach of the dead girl. These facts were sufficient to bring Nellie to trial. In personal appearance she was prepossessing, though not beautiful. Tall and graceful, she was intelligent and striking, and her trial which has lasted since Feb. 27, has attracted general attention. The jury were out but 12 minutes, and returned with a verdict of acquittal, the Judge having instructed that the evidence was not sufficiently clear to convict. There was a great sensation in court. The accused girl shook hands with the Judge, jury, and counsel, and left for Whitewater with her sister and the young man to whom she was to have married, and who stuck to her through the whole trial.

NOTE: Following is an early news report that incorrectly stated that Nellie Horan (sometimes incorrectly given as Nettie Hoxan) had confessed and committed suicide.

FULL TEXT (Article 3 of 3): New York, December 8th.—A Whitewater, Wis., dispatch says: Four years ago the Horan family removed to this place from Koshkanong six miles distant. One year afterward the mother died suddenly in great agony. The physicians said the symptoms were those of poisoning, but no legal investigation was had. Six months later the father died in the same war, and at the end of another year the first daughter breathed her last. Although detectives worked on the case for weeks the crime could be fastened on no one. Now Ann, the last daughter, is dead. The physicians pronounced it strychnine poisoning, and the girl’s stomach has been sent to Milwaukee for chemical analysis. It is believed some one has been pursuing the family for years.

Chicago, December 8th.—To-night the Inter-Ocean has a dispatch from Fort Atkinson, Wis., where the Hoxan family formerly lived, and were much respected.

The dispatch says a report was received there from Whitewater that the third sister, Miss Nettie, died there to-day of poison, making the fifth member of the family that in this case it was suicide, and that before her death Nettie confessed to having murdered her parents and two sisters. It is also asserted that she confessed to poisoning another person, though this is doubted.

No cause is assigned. Her own death was brought about by fear of exposure through the analysis of her sister’s stomach. Nettie was a school teacher, and has two sisters still living at Fort Atkinson.

NOTE: The San Francisco gives the state of Illinois as the location of Whitewater, by Wisconsin is clearly correct (due to the mention of Koshkanong). 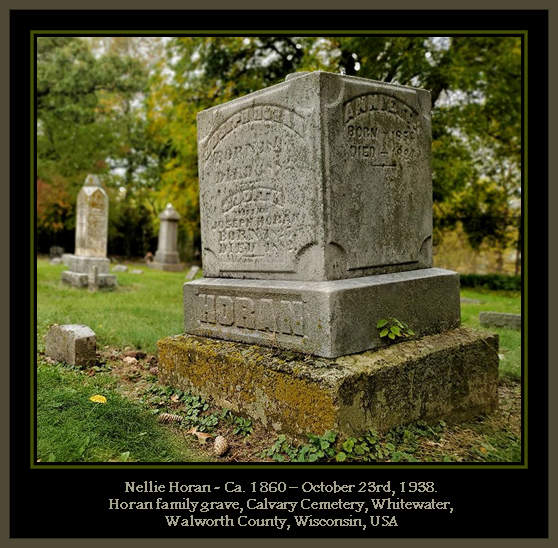